Comment: Unapproved protests of more than one person are illegal, so Arshak Makichyan has picketed solo in Pushkin Square for months to call for climate action

If you want to protest in Russia, it easier to move to another country. But Russia is a part of our planet and we need to change all countries, not only the “good” ones.

We cannot be ruled by fear. But fear came first. I was a 24-year-old student when I read about Greta Thunberg on Greenpeace International. I could not even imagine doing something like that in Russia. This was in October.

Then, in February, I was at a march in memory of the former deputy prime minister Boris Nemtsov, who was killed because he was not afraid. Something changed in me. I understood that it was now or never.

This article is part of a collaboration between Climate Home News and the global student climate strike movement. Read why we are offering a platform to young people here.

After fear there is the search for opportunities. You need to understand there are very contradictory laws for protests in Russia.

If you under 18 years old, it is illegal. If you are older, you can protest only alone, because every protest with more than one person must be approved by the government.

The government has set aside Sokolniki park for protest, they call it ‘Hyde Park’ after the famous activism site in London. It’s so quiet there you might as well protest in a forest, but it’s very difficult to receive an approval for a better place.

We staged our first student strike there in March. It was really hard to get the information out about that action. Even Greenpeace Russia at first was afraid to write about it, because in Russia it’s now illegal to “involve” a minor in a protest. Still, around fifty people came.

One of the coordinators told me that the police called her school and asked for information about her, saying she was suspected of attracting minors to “extremist” activities. Most likely they wanted to scare her, because it would look terrible for them to arrest her. They don’t need to jail everyone, they just need everyone to be afraid.

Sokolniki is where we had planned to hold another march on Friday, as part of the next global strike for climate, but on Thursday the authorities cancelled our permit claiming some technicality. 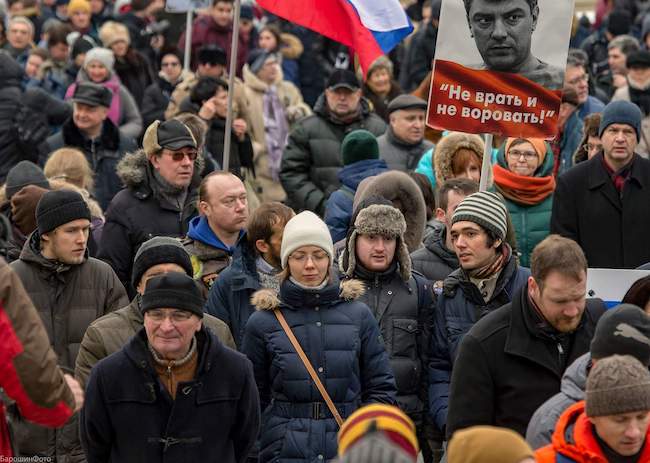 Visible protest in Moscow is very important. The politicians are most afraid of big protests in big cities and here people are more ‘liberal’. So, like Greta, I decided to make my stand alone, every Friday in Pushkin Square in the middle of the capital.

At first, the police didn’t care about my single picket (most likely they thought that I’m just crazy). But after six weeks of striking each Friday, the English-language Moscow Times asked me for an interview. The next week, during my picket, the police came to me and asked loads of questions. Why do you do it? How much are you being paid? They care about my answers. A thousand roubles? Why so little? Then they took picture of my passport and went to consult with their chiefs.

The best path for them is to ignore me. They are watching and waiting. When I make my first mistake, or when my protest becomes more effective, I think they will jail me.

But there is some good news too. I’m not alone anymore. As part of the next global school strike on 24 May, we are organising with the student union Uchenik.

And there are many people who want to join to me but can’t or are afraid to go alone and can’t go with me because of the law. On Twitter and on Russian social media, people are talking about my pickets. Last week one student did a single picket in Yaroslavl, and another helped me set up the Fridays for Future Russia Instagram page. Many people took part in my flash mob #LetRussiaStrikeForClimate. I have many new friends with whom I can talk about climate change in the Russian language.

Choosing friends is important. Who can you trust or not? You start to get kind of paranoid, because in Russia you can’t be sure.

Now I’ve been protesting for ten weeks, I have to choose what to do next. It’s a choice between the people close to me, who disprove of my strikes because they afraid for me…and the future.

Why is it difficult to protest here? Because the north remembers: Stalin’s repression, the February Revolution and civil war, the 90s after the collapse of the Soviet Union. Times change, but fear remains.

We fear because of Russian laws and politicians. We have a constitution and rights, and we have a reality.

If you work, the authorities can lay you off from your job because of your protest. The police can torture and beat you if they want or they can send someone to do it (and they have many other ways of blackmail and intimidation). And there are no fair courts, because they do what they are told to do.

If you want to protest about climate change, you need to know that most Russian people think that it’s good for them or don’t know anything about it. Most Russians must fight to survive and have no time for science. They have more ‘real’ and obvious problems.

That’s why oil companies don’t need to spend money to lie or manipulate our understanding. And don’t forget, here oil companies and mass media are mostly state owned. That’s why “our” mass media are completely silent about global warming. Like when the UK declared an ecological emergency, they said nothing, about the Fridays for Future protests of more than one million people around the world, they said nothing.

And even if you decide to protest, for many, many people (maybe even for your parents) it means meaning you are a spy from the US (or something like that), especially for those who like to watch Russian TV.

If you love freedom, you must be jailed; if you love nature, you must destroy it; if you are a good man, you must go to war. The Russian soul is difficult to understand.

This article is not available for republication