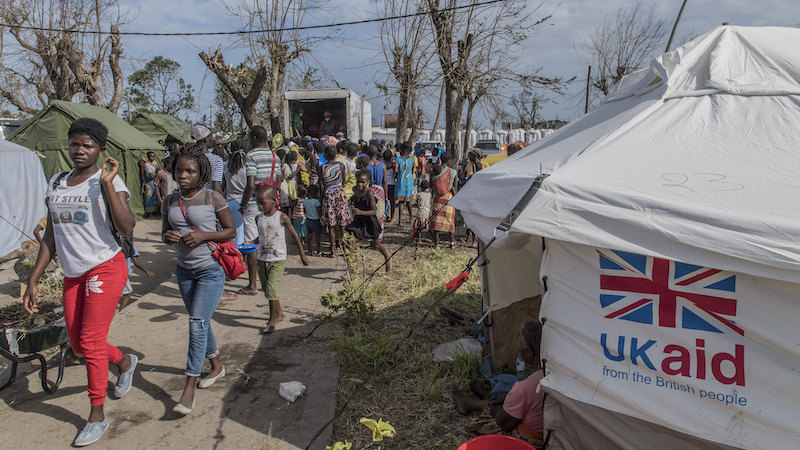 Tents supplied by the UK to provide shelter to people who lost their homes as a result of Cyclone Idai in Mozambique (Photo: WFP/Rein Skullerud)

Low-carbon projects in developing countries are being strangled by red tape, ministers from Uganda and the Gambia said they would tell the UK’s international development secretary.

While grateful for international support, the African politicians said has a message for secretary Rory Stewart that administrative costs charged by international agencies, such as the UN Development Programme, were unacceptably high.

Gambian environment minister Lamin Dibba told Climate Home News: “We would want to see more countries not only pledge [new money], but commit the resources and make them accessible. Sometimes it takes one or two years to follow a particular project.”

Germany and Norway have committed to doubling their contributions to the UN’s Green Climate Fund (GCF) as it seeks new finance this year. The UK has not yet announced a new contribution.

The UN typically charges 12 to 20% of funds for climate projects, while the World Bank Trust takes up 5% administrative fees added to management costs, the International Institute for Environment and Development (IIED) told CHN.

Poorer countries have long argued money for climate projects is not a donation, but an obligation on the part of the wealthy nations that are overwhelmingly responsible for global warming.

“I know the developed world has its problems – they also have to reduce their greenhouse gas emissions in their own countries,” Ugandan minister water and environment Sam Cheptoris said. “But because we are poor: it is difficult to cope with the consequences [of climate change]. We are prepared to play our part. There should be some sort of partnership with the developed world.”

One tenth of UK climate aid spent through western consultants

Both ministers pointed to GCF-funded projects in their countries that had been subject to administrative delays. Staff sent by international agencies were also frequently disconnected from the countries’ needs, they said.

“Some of these NGOs, we call them briefcase, one-man NGOs,” Dawda Badgie, a senior civil servant at the Gambian national environment agency, said. “When you go there, you talk to them, they don’t know what they are doing there.”

The group, who were in London representing a climate negotiating bloc of the world’s 47 least developed countries, called on international agencies to give local experts and officials more control.

“When intermediaries come with their project, they come with their experts,” Lucy Ssendi, a climate advisor to the Tanzanian government, said. “You have to fly in consultants in and out, but if it is an initiative that is built in the country, you also have local experts. That would bring down the cost and make the amount of money for actual implementation reasonable.”

“The idea is to try and change how funding arrives in countries, for it to come behind what these countries know is working, building the national institutions and not just the intermediaries coming in as project managers,” IIED’s climate programme director Clare Shakya said.

The UK Department for International Development (Dfid) did not respond to questions.

This week, Stewart told journalists Dfid should put more of its own experts into the field to ensure its aid money was delivering “quality”.

“I would like in 20 years for people to say Dfid has the best experts on the ground who speak local languages and really understand the ins and outs of running a health clinic in Rwanda or a school in Nigeria. And that we’re known for our people rather than our money,” the Telegraph reported.

Last week, UK prime minister Teresa May committed to aligning all of the UK aid budget with the achievement of the Paris climate agreement goals.

Changes to international climate support were urgent, Cheptoris said, with climate change taking a toll on the countries.

In Uganda droughts were drying out vegetation and trees, which in turn worsened the impact of storms.

“Had we windbreaks, that would have reduced the velocity of the wind and the houses would be safe. Because there weren’t any trees, the wind just blew,” he said.