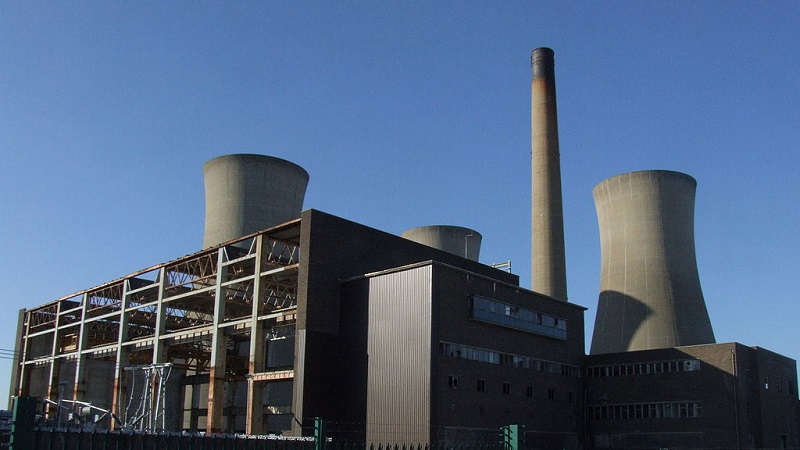 The UK government reportedly wants to carry over past emissions cuts, such as from coal plant closures, to meet future targets (Photo: Wikimedia Commons/Chris Whippet)

The UK has reportedly decided to count “surplus” carbon emissions toward future targets, an action advisers have warned would “undermine the integrity” of its climate regime and break faith with the Paris Agreement.

The UK’s Climate Change Act established an independent Committee on Climate Change (CCC), which sets five yearly “carbon budgets” that limit the amount of greenhouse gases the country may produce.

The UK beat its target for the second carbon budget period from 2013-2017.

The government was due to make a decision last Friday on whether it would count 88 million tonnes of that surplus toward its 2018-2022 budget. On Tuesday, the Financial Times reported ministers had agreed to do so, although no official announcement has been made.

A spokesperson for the department for business, energy and industrial strategy (Beis) said the government planned to make its position clear “soon”.

“We are working closely with the Committee on Climate Change on how we best deliver against our world-leading carbon targets, including how we deal with technical changes in the way we account for carbon emissions,” said the spokesperson.

The CCC’s chief executive Chris Stark said on Tuesday morning: “There’s (understandably) a lot of speculation about this story in the FT today, but we’ve had no official announcement from the government on the decision.”

He added the CCC would “have a view” when that decision emerged.

Committee recommendations have always not been followed to the letter, but carrying over the surplus would go against explicit advice from the CCC.

In February, CCC chair John Gummer wrote to Beis minister Claire Perry urging the government not to use the credits. He argued this would lead to higher emissions. That would be inconsistent with the Paris Agreement, he said, because a foundational principle of the deal is for countries to increase their ambition over time.

Gummer said carbon budgets had been set by the CCC on the understanding that it was UK policy not to transfer credits between periods. Cuts that beat the first budget were dropped. Changing policy now, he said, “undermines the integrity of the framework for emissions reduction”.

The UK CCC is seen as model for climate governance around the world.

The Financial Times reported that chancellor Phillip Hammond had written to government colleagues asking them to ignore the committee’s advice. Business and energy secretary Greg Clarke had agreed, the article said.

Carbon Brief’s Simon Evans said the rollover would allow UK emissions to increase during its next carbon budget – 2018-2022. “Not a great look for a country hoping to host the Cop26 UN climate talks next year,” he tweeted.

The UK is set to miss its carbon targets during the 2020s by some margin, which Evans added was “why the government might want to make use of these ‘flexibilities'”. 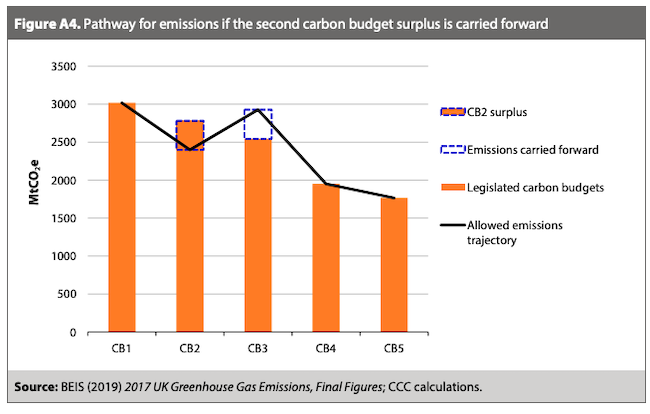 The emissions at stake amount to 24% of the country’s annual net emissions or roughly 35 times the CO2 output of one of the UK’s largest remaining coal plants (Source: CCC)

The government is currently considering (and widely expected to accept) advice from the CCC to strengthen its 2050 target under the Climate Change Act to net zero emissions.

Greens MP Caroline Lucas responded to the news by calling it a “shocking ruse” by the government. “We will never reach net zero by 2050 like this,” she said.

Other countries have abandoned similar accounting tricks. In December, New Zealand said it would cancel extra credits it built up through the Kyoto Protocol. Australia on the other hand has been widely criticised for its intention to use those credits to manufacture emissions cuts when real emissions continue to rise.