After nearly two weeks holding roads across the capital, the climate protesters apologised to commuters but said their action had been a success 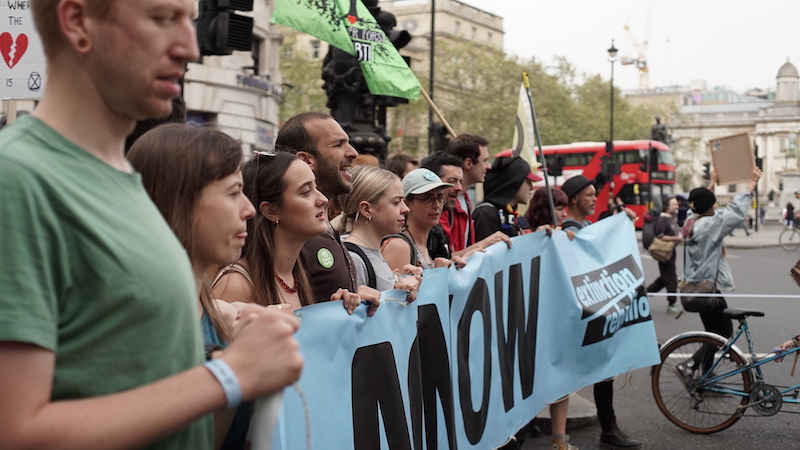 Extinction Rebellion will vacate the sites it has occupied across central London for more than a week.

Over one thousand activists had been arrested by Wednesday evening in a series of traffic disruptions that blocked roads and bridges across the capital.

The decision to end the occupation on Thursday was taken at a ‘citizen’s assembly’ on Wednesday afternoon. Activists deliberated in groups whether before giving out a final vote.

In a statement, the group apologised to Londoners: “We know we have disrupted your lives. We do not do this lightly. We only do this because this is an emergency.

“Around the planet, a long-awaited and much-needed conversation has begun. People have taken to the streets and raised the alarm in more than 80 cities in 33 countries. People are talking about the climate and ecological emergency in ways that we never imagined.”

Police had managed to free the avenues framing Marble Arch at the end of the afternoon on Wednesday, after painstakingly unpeeling activists who had glued themselves to each other.

One by one, protestors volunteering to be arrested were swept from the ground by a wave of officers wearing high-vis, yellow jackets, and into the police van, the occasional cheer breaking out. “We love you!”

Sitting at one of the main stalls on the main camping site, Marble Arch, Green Party councillor Shane Collins, from Mendip District Council, expressed his satisfaction over the decision.

“We’re knackered,” Collins said. “We’re not doing an Occupy, we don’t want to stay on and on. I’ve got bloody elections in two weeks, I want to get re-elected.”

Collins, who has previously taken part in acts of civil disobedience such as Reclaim the Streets (RTS), said that Extinction Rebellion had taken environmental protests “to a whole new level”.

The Guardian reported that the group received more than £200,000 in donations since the start of the protests. More than 30,000 new recruits have offered their support.

“It’s a numbers’ game,” said Collins, adding: “The no drugs and alcohol policy has been really good.”

There had been donations £1100-1200 at the stall at Marble Arch alone, Collins said. Online support, on the other hand, had been “mad”.

Asked what the group envisaged next, Collins said he would like to occupy Heathrow. There would be much deliberation until anything was agreed, he added.

The group plans to meet at Southwark Cathedral at 7.30am on Thursday morning to target the City of London. There will then be a closing ceremony at 5.25pm at Hyde Park Corner.

The movement has three central demands: for the UK government to “tell the truth by declaring a climate and ecological emergency”, reduce “greenhouse gas emissions to net zero by 2025”, and set up a citizen assembly’s that would oversee the ecological and climate transition.