The authorities are partnering with communities to halt the decline of forest cover and produce wood, charcoal and fruit in a sustainable way 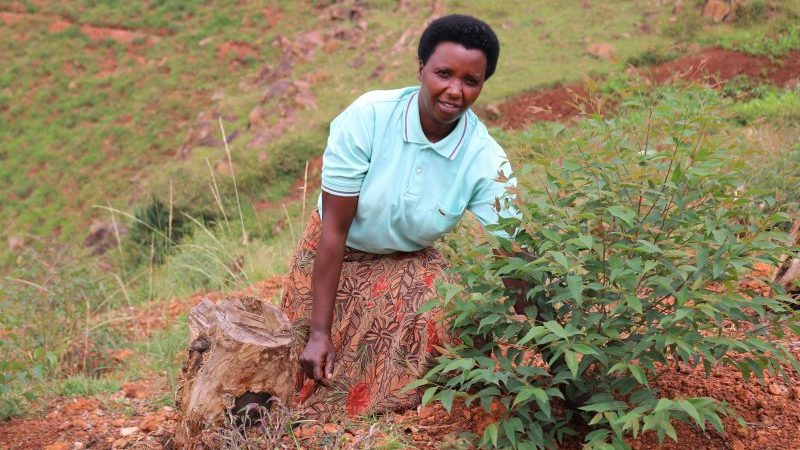 After years of planting trees and having no forest to show, Jerome Tuyisingize, a specialist at the Rwanda Water and Forest Authority (RWAFA), realised they were going about it the wrong way.

Rwanda is aiming to halt decades of forest loss, while meeting fast-increasing demand for wood.

“We never consulted the farmers on if they needed to plant a tree, where they needed it, the specific species they need and why,” says Tuyisingize. “Sustainability was a problem, as they were afraid they would lose the farms under tree to the government.”

Last year his department reviewed its strategy, to put people dependent on forest resources at the centre of tree-planting efforts. That includes community groups and businesses such as tea growers who use wood to cure tea.

The target in Rwanda’s national climate plan, to cover 30% of the country with forest by 2030, may not look ambitious when you learn the baseline figure was 28.8% in 2013.

As a growing population burns wood and charcoal for fuel, though, these woodlands need to become a lot more productive. Since the 1960s, forest cover has declined by two thirds. The deficit between wood supply and demand is projected to increase from 4.3 million tonnes in 2017 to 7.5m by 2026.

It goes hand in hand with a target under the international Bonn Challenge to restore 2 million hectares – an area the size of Wales – of degraded land.

A 2016 national forest inventory recorded high rates of degradation in natural forest, as trees are cut faster than they regrow. The vast majority, 68%, is privately owned by smallholders.

Now the idea is to co-manage some 80% of the forests with these various stakeholders by 2020, explains Jean Claude Hafashimana, district forest support development officer at RWAFA. “This will ensure different stakeholders economically benefit from the forest resources while helping the government achieve its forest cover goals.”

One pilot scheme it is funding in eight districts is farmer field schools: groups of smallholders who form committees and appoint representatives to be trained in sustainable agroforestry.

Since October 2018, Pastor Elisa Kamuzinzi has been coordinating four such groups totalling about 160 members in two villages.  Together they hope to cover 44 hectares with trees.

They plant species such as Grevillea robusta (southern silky oak), and Cedrela serrata (Chinese toona), which serve a dual purpose: young shoots can be used as cattle fodder and mature trees harvested for timber. They are also cultivating fruit trees by people’s homes.

Kamuzinzi volunteered to lead the agroforestry initiative because he could see that land degradation made his crops more vulnerable to bad weather. “Rains are windy, breaking bananas and every other plant on the farm. I needed a solution to shield my plants against this.”

Based in Rwamagana district in eastern Rwanda, Kotabb brings 110 plots owned by 78 farmers under a common management plan, covering 28.1 hectares.

Last December, the cooperative appointed a private company, Enterprise Milt Service, to plant 2,500 eucalyptus a hectare and nurture them for the first two years.

These are divided into seven blocks, with the first due to be harvested in 2023 and sold for electricity poles, timber and charcoal. Each block is expected to regenerate at least four times by 2050. A fifth of the income goes towards administration of the cooperative, with the rest going to the plot owner.

“Pulling together is beneficial economically,” says cooperative president Augustine Bizima. “We can sell our produce together and negotiate common pricing.”

Members are also investing 8,000 Rwandan francs ($9) each into a beekeeping project, which potentially has a quicker payback. “This will help members solve urgent problems such as school fees,” says cooperative secretary Kayibonua Julienne.

For its part, RWAFA is advising the cooperative on how to introduce different species that can be used to improve the soil, feed livestock or grow fruit.

Tuyisingize is optimistic that the efforts will produce healthy forests. “It’s a solution where everyone benefits,” he says. “Communities earn economic and nutritional benefit while government improves and sustains tree cover.”