While some families have moved to safer ground, young people feel left behind in areas increasingly prone to deadly landslides 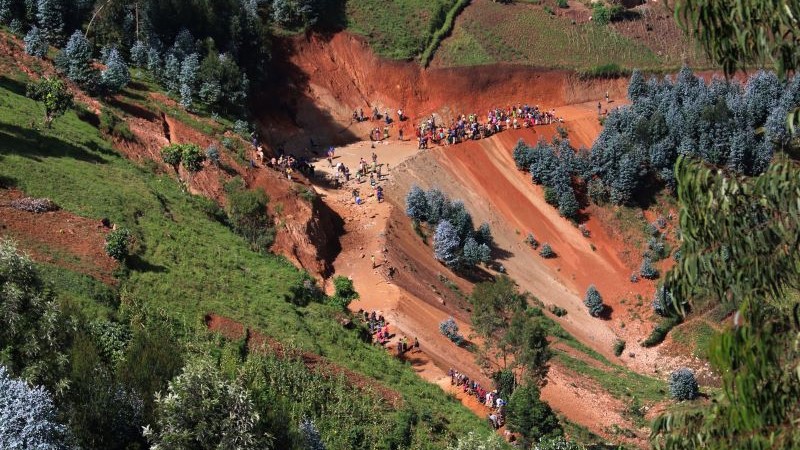 Villagers reconstruct a section of road in Karongi district ahead of the rainy season (Pic: Sophie Mbugua)

By Sophie Mbugua in Karongi

The night of 6 May, 2018 is engraved in Sebahire Leonidasi’s memory. The rain started about 8pm. A rumbling sound woke his family up two hours later.

“I first thought it was thunderstorms, as the rains were very heavy that night,” explains the 49-year-old father of six, from Rwankuba sector, Karongi district in western Rwanda.

Then he heard neighbours clanging jerrycans and pans to raise the alarm. “To our surprise, Murera mountain was coming down on us. Rocks and muddy water fell until 7 in the morning… I have lived in this village all my life but have never seen such a disaster before.”

Two members of Leonidasi’s family were among 18 people to die in the landslide. Houses were flattened, crops destroyed and 300 people left homeless, according to Rwanda Red Cross.

It was just one of many deadly weather-related disasters to hit Rwanda in 2018. The official death toll of landslides, lightning, floods and other events was 254, a stark increase from 82 the previous year. The economic damage has been estimated at 204 billion Rwandan francs ($225 million). Nearly 16,000 homes were destroyed.

Today, the survivors are rebuilding their lives, with patchy support from government, but the fear lingers. Homes continue to crop up in disaster-prone areas, while climate change heightens the risk of extreme rainfall. 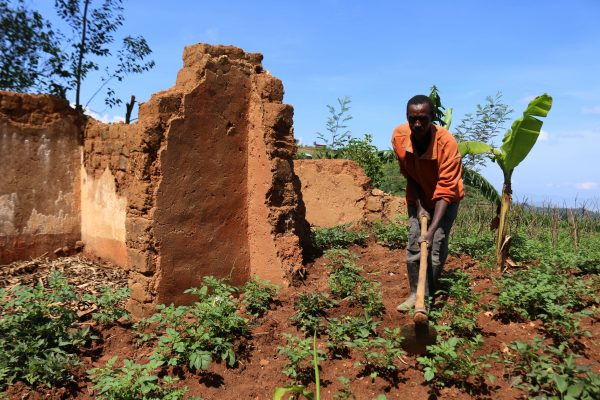 Sebahire Leonidasi moved with his family to higher ground after a 2018 landslide, but returns to his old farm to grow beans, potatoes and bananas on his old farm (Pic: Sophie Mbugua)

Landslides in Rwanda occur where heavy or sustained rain falls on steep, clay-rich slopes. “Rainfall is one of those factors that have been found to trigger landslides because high rainfall events result in high water saturation in soils reducing the strength of the soil,” according to a study of the area by Turkish researchers.

Human activities further destabilise the slopes. Trees are being cut down to make way for roads, homes, mines and quarries, dams and reservoirs to support a growing population.

Rwanda’s meteorological agency (Meteo Rwanda) forecasts normal to above normal rainfall (350-510mm) in the March to May rainy season, with a likelihood of flooding in many parts of the country.

“In Rwanda there are different micro-climates and depending on the nature of topography it is a bit difficult to make forecast for a small area. Specific data would allow better response and mitigation. This makes planning difficult at times,” says Anthony Twahirwa, weather and climate services and application division manager at the agency.

Even where data exists, many project developers do not factor it into their plans, leading to avoidable damage.

“We are trying to increase our investment in mainstreaming disaster risk reduction in all development sectors. As of now, sectoral planning does not sufficiently consider future weather and climate projections,” explains Phillipe Habinshuti, director for response and recovery at the ministry of emergency management.

With help from the United Nations Development Programme (UNDP), Meteo Rwanda and the disaster management ministry are working to improve early warning systems.

“We are designing a system where we advise the disaster management ministry on expected weather changes on time. The ministry then designs and disseminates tailormade advisories specific to different stakeholder needs. This involves feedback mechanism to evaluate the effectiveness of the weather predictions and advisories to enable us improve on models and equipment helpful to improve future forecasting,” says Twahirwa.

Then there is the question of how citizens respond to warnings. Meteo Rwanda issues radio alerts when heavy rains are on the way, urging people to move away from disaster-prone areas. Not everybody has the resources to do so.

“They keep telling us to move, but I can’t,” says 24-year-old Reonidas Muhawenimana. “As a manual labourer, it’s not easy to save, buy land and build.”

The government prioritises families with children for relocation from landslide zones, leaving young people to fend for themselves.

“I would want to relocate if I had the means but how do I go about securing another property to relocate?” asks Muhawenimana. “If the government can allocate us land we can find ways to construct our houses. We just need a piece of land somewhere safe.”

Habinshuti acknowledges young people get less direct support, arguing the priority is to help the most vulnerable. But he says they will benefit from a pilot the ministry is rolling out in landslide-hit areas to help youths start small businesses.

“Dependency on donors and government to rebuild after disasters is not an effective and sustainable model for communities to cope and recover from disasters,” says Habinshuti. “We cannot consider the youth with capability to relocate and rebuild as vulnerable. The approach is to wean them off this dependency, through helping them generate income by which they can then use to relocate to safer grounds.”

Leonidasi relocated his family to higher ground, where he had a small plot of land. The government supplied iron sheeting and some food supplies. He still visits the old farm to cultivate beans, potatoes and bananas.

For now, Leonidasi feels that his family is safe, but he worries about his former neighbours left behind every time a radio announcement comes on. “It’s about to rain and with every mention of it on radio reminds me of that scary night. I would not want to lose one more person out of this nightmare.”