On the slopes of Mount Elgon, residents live in fear of the next deadly landslide, as tree-planting solutions fail to take root 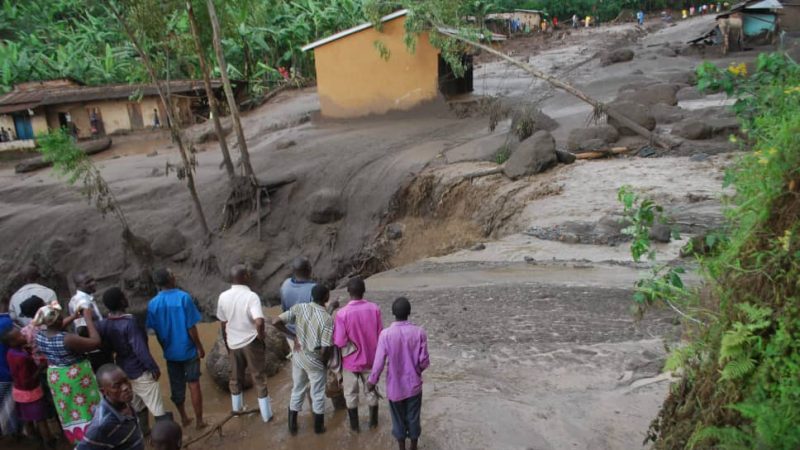 Villagers survey the damage from mudslides, which were triggered by a heavy downpour in October 2018 (Pic: Leonard Mukooli/Daily Monitor)

By Frederic Musisi Timberlake in Bududa

The slopes of Mount Elgon saw one of Uganda’s deadliest natural disasters in 2010, when 365 people died in landslides triggered by torrential rain.

Government and aid agencies flagged the area as a red zone for climate variability. The UN Development Programme (UNDP), UK and Danish agencies poured $1 million into a pilot programme 2012-13 to help residents cope with weather extremes. One of the main initiatives was planting trees to stabilize the soil.

Yet landslides are a continual hazard. Most recently in October, boulders rolled through the villages of Suume, Nyekhe, Malila, Lwanda and Nanyinza in Bududa district, killing 65 people, according to Uganda’s department of disaster preparedness and refugees.

“We would have planted the trees all over this area but the government abandoned us after the landslides happened,” said James Kuloba, a councillor in Bumwalukani parish.

District leaders brought more than 1,000 saplings after the 2010 landslides, said Kuloba, but they did not take root in the wet and crumbly soil.

To make matters worse, due to population pressure and demand for less-affected land, communities cleared forest to make space for homes and crops.

The head of government’s climate change department, Chebet Maikut, said landslides have intensified in the recent past with above-normal rainfall, particularly in Bududa and areas surrounding Mt Elgon.

“It is not obvious that whatever is happening is climate change, but what is obvious is that things have changed,” said Maikut. “Environmental disasters like landslides are things we only used to hear about.”

State minister for environment Mary Kitutu is an environmentalist and published researcher of the landslide crisis in the Elgon. When it rains heavily in the area, she explained, water flows fast through the porous topsoil into a deeper clay-rich layer. There it pools, causing the land to slump.

“The challenge of some of the hilly areas being not affected as compared to others heavily devastated leaves more questions to be answered,” said Kitutu. It can also cause flooding problems downstream, as sediment silts up river channels and wetlands.

A government plan to relocate residents to safer areas after the 2010 landslides fell foul of local politics. Some leaders instead fought to get Bududa, previously part of Mbale district, independent district status, with its own budget – giving people an incentive to stay.

“They promised to resettle us but this has been a song to our ears,” said Kuloba. “We need food to feed our families therefore if planting trees is to succeed, government needs to move us from this area as it planned before it embarks on re-afforestation of the area.”

Another aspect of the project, to generate biogas for use in homes and reduce reliance on firewood, was going well – and then the money ran out.

Several communities wrote bankable project proposals, said Marion Namono, Bududa district environment officer. “Many are still demanding more due to the fact that they would [prefer] not [to] cut their trees for fire but rather they would leave them as investments.”

In a common problem for donor-funded initiatives, after the implementation period ended, there was no follow-up support to sustain progress.

One official in Mbale, the provincial district, complained the programme was to “mainly meet donor requirements as opposed to addressing the concerns of the community”.

That was echoed in a 2015 review of adaptation finance by Oxfam and Climate Action Network Uganda. “Generally, community participation was not evident in the design of the projects,” the report said.

In Bududa and five other case studies, it found weak transparency around how agencies spent the money, making it hard to assess their effectiveness.

UNDP defended the programme in an email to Climate Home News, saying it enhanced collaboration between local governments in Mbale region to plan and integrate climate issues in district development plans.

“As part of UNDP policy advice to government and other development partners, analytical studies and pilots are undertaken to inform policy making,” a spokesperson wrote.

“These pilots and analytical studies provide lessons to enable government and other development partners [to] scale up these initiatives. In this regard, our investment is largely to develop inclusive and sustainable (projects) that demonstrate scalability and reliability to transform society which can be taken up by other donors and government.”

The UN agency has spent over $13m on climate change and resilience building on various projects in Uganda in the last five years.

Uganda, like many developing countries, faces a cobweb of foreign donor-imposed conditions before it can access funds to cope with the impacts of climate change. Its national climate policy counts on multilateral sources for 70% of spending, with the remainder locally mobilized.

Despite the challenges, government official Maikut said “donors are key”.

With landslides a continual hazard in the area, what some residents want is support to leave for safer territory.

Joyce Namyesi told CHN that previously, she and her neighbours were wary of relocation plans, seeing them as a ploy to take over their land. Now, she believes the area is no longer liveable.

“Whenever they get for us another place, I think I will be the first person on the line ready to leave,” Namyesi said.

“Move away from the mountains and conserve nature. The politicisation of the relocation programme has been resolved. If politics had not been at the centre, then people would have been resettled in phases,” Museveni said.

The department of disaster preparedness and refugees says it has acquired land in the adjoining Bulambuli district for people to move to, but the exercise will be phased owing to financial constraints. Some 100,000 residents are in line for relocation over 10 years, at an esimated cost of $21 million.