Brazil: Official who fined Bolsonaro for illegal fishing in 2012 is fired

The $2,500 fine launched a seven year vendetta against José Olímpio Augusto Morelli and the agency that protects the Amazon, from the man who now runs the country 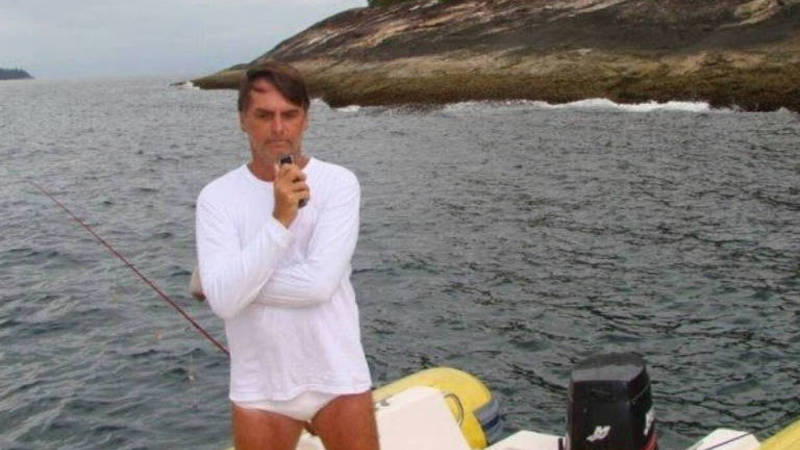 A photo taken by Ibama agent José Olímpio Augusto Morelli on 25 January, 2012 as evidence that Jair Bolsonaro was fishing in a protected area (Photo: Ibama)

On 25 January, 2012, retired Army captain Jair Bolsonaro was just an irrelevant far-right congressman when he was caught fishing inside the Tamoios Ecological Station, a federal marine reserve just off the Rio de Janeiro state shore.

One of the officials who intercepted Bolsonaro’s inflatable boat was José Olímpio Augusto Morelli, who works for Ibama, Brazil’s environmental enforcement agency. Although there were other personnel on site, Morelli signed the R$10,000 (about $2,500) ticket and wrote up the report. Plus, the agent took a now famous evidence photograph of the future president in a white swimsuit with a fishing rod behind him.

Bolsonaro never forgot Morelli or Ibama. A few weeks later, during a speech in congress, he recounted the incident in these terms: “The first thing he said to me was… ‘Get out!’ As if I were a dog”, Bolsonaro said in March 2012.

“This citizen here, José Augusto Morelli, said: ‘Come out! No one can fish here, whether it be a congressman or not because the decree you voted on has to be respected’. I was obliged to answer in the same tone, cursing Morelli and saying that we did not vote the decree,” Bolsonaro went on.

Bolsonaro tried to nullify the fine, to no avail. In retaliation, in 2013 he introduced a bill to forbid Ibama’s agents to carry guns. In all other cases, Bolsonaro wants liberalisation of gun laws. After admitting he was targeting Ibama in revenge, he withdrew the bill.

But he didn’t stop there. In the same year, Bolsonaro filed an injunction in order to give him, and only him, to fish legal permission to fish the 84.5 sq km Tamoios protected area. The justice department dismissed the idea.

After these defeats, it seemed the battle was lost. But then the unthinkable happened: the homophobic, racist, pro-dictatorship congressman became Brazil’s president.

After his election, Bolsonaro continued his assault on Ibama. He repeatedly accused the body, which is the principle enforcer of legal environmental protections in Brazil, of being an “fine industry” controlled by radical greens. His criticism emboldened environment crime offenders, especially in the Amazon, where Ibama agents have faced increased opposition to enforce the law.

As for the fishing fine, which Bolsonaro has never paid, things have swung in the his favour. Last December, a few days before he took office, the president-elect had his fine suspended by Ibama’s Rio de Janeiro bureau, following a legal opinion from the office of the solicitor-general, who found Bolsonaro had not been given the opportunity to defend himself properly by Ibama. Now the process will have to start again. The timing of the decision prompted the prosecutor’s office to open an investigation.

Finally, it was time to take revenge on Morelli. On 28 March, Ibama discharged him without explanation from his Brasília position as the head of Ibama’s Air Operations Center. It is a crucial task in which he coordinates airborne raids on illegal mining and forestry in the Amazon. As a permanent employee, the 56-year-old agent cannot be fired from the government easily, but he can be transferred to a less prestigious, lower-paid position.

Morelli did not want to speak to Climate Home News on the record. Later he told other media he has no doubt his discharge is related to the 2012 fine. His department has nine employees in the same hierarchical level, but only Morelli was discharged by Bolsonaro’s government.