Innovation flees after Trump reimposes sanctions, environmentalists and government say that puts the country on a dangerous path 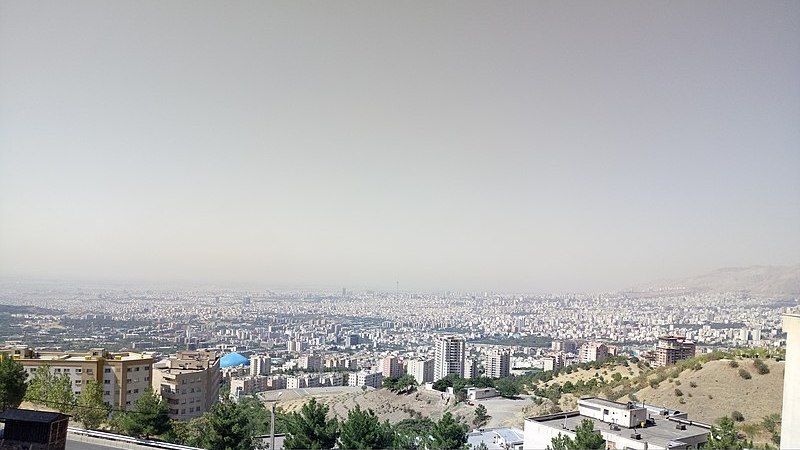 With its empty platforms and chairs, a deserted car show in Tehran would delight most ecologists. Not Hamed Ghazi, a softly spoken Iranian from environmental NGO Cheeco.

Far from representing a change of heart towards cars from consumers, the ghost-like foreign section of 2019’s Tehran car show indicates the exodus of innovation from the country since Donald Trump’s US reimposed sanctions in November.

“As companies from developed countries leave the market, we are worried about one thing: what will happen to Iran and the region, once the polluting industry has replaced the modern one due to US sanctions?” Ghazi told Climate Home News.

France’s Renault, Japan’s Mazda, and South Korea’s Hyundai are among the car manufacturers to have pulled out of the Iranian market. Gone are the fuel-cell cars promised by Toyota and Hyundai in 2018, or the deals struck between Iranian car-makers Iran Khodro (IKCO) and Saipa with the French PSA Groupe’s Peugeot and Citroen brands.

Instead photos circulated on Twitter show a straggle of Chinese four-by-fours standing alone, while Saipa is showcasing only one new model – a mid-sized sedan named Roham. The event is a flop.

According to #Asbebokhar's photos, the #TehranAutoShow 2019 is a failure. Most companies have either left #Iran or wound down operations to skeleton crews (Chery et al.), leaving a straggle of independent operators with a few small #Chinese #SUV to fill foreign vehicles part. pic.twitter.com/uCLUlC1RIw

But the need for new, cleaner technologies is desperate. There are 35,000 deaths from air pollution in Iran every year, according to the government.

“When sanctions are imposed and car manufacturers such as Peugeot and Renault leave, we have to fall back on engines produced locally and of subsequently poorer quality,” Iran’s vice-president Issa Kalantari told AFP in October.

Roughly 127,000 vehicles 35-plus years old are still on the roads, according to roads minister Abbas Akhoundi.

The same goes for fuel. Under pressure from sanctions, the country has had to turn its petrochemical factories into oil refineries to produce its own petrol. Iran cannot import the higher quality additives necessary for cleaner fuel, which forces it to rely on homemade cocktails.

Other sectors key to a green transition have also taken a hit. Faced with such a pollution crisis, Iran has been trying to increase the share of renewably-produced electricity in its energy mix. It hopes to achieve 5 gigawatts by 2022.

But the sanctions could dent that effort. In August, British renewable energy investor Quercus announced that it was ditching the construction of a €500 million solar power plant. Norway’s Saga Energy has also had to suspend plans to build 2GW of new solar capacity in Iran by the end of 2018, while energy giants like Siemens said that they simply couldn’t consider new deals with Iran.

“The most difficult problem that the market is facing right now is that, yes, there are people willing to invest in the renewable sector, but there are no materials,” said Morteza Sabbaghzadeh, a business consultant at solar firm Arias Solar who has worked in Iran’s renewable sector for ten years.

“Iran already has five companies producing solar modules, but that’s not enough to run a power plant,” he says “You need the investors, you need the technology, you need the installation equipment and cables.”

Left to their own devices, Iranian companies can design and install renewable plants of up to 1MW, said Sabbaghzadeh. In the past, larger power plants larger have been installed by foreign companies from Germany, France, Italy, Spain and Australia.

Sanctions also affect money transfers. “There are Iranian investors who are willing to invest, but they’re not capable to buy the products, or transfer the money. This has been more difficult after Trump announced the last sanctions,” said Sabbaghzadeh.

In June, before the resumption of sanctions, more than 250 companies had signed agreements to install and sell power from about 4GW of new renewables in the country. Only 602MW of this has been set up, according to Reuters.

It is less than four years since the country looked to be opening a new chapter of broader relationships when they agreed with the US, EU and other partners to limit their nuclear research programme. But Shirin Hakim, a PhD student at Imperial College London studying the impact of US sanctions on Iran’s environment, said the environmental sector was now suffering a brain drain.

“It is really such a shame, so many of my friends [working in the environmental sector] had to pull out of the Iranian market,” Hakim said. “They were so hopeful with the nuclear deal and many people were moving back to help facilitate business with the West.”

Sanctions also jeopardise international lending earmarked for environmental projects. A recent report on the impact of Iranian sanctions by the US Congress Research Service noted that “Iran’s efforts to deal with environment hazards and problems might be hindered by denial of World Bank lending for that purpose”.

Over the years, the US has prevented development funds such as the Global Environmental Facility (GEF) and United Nations Development Program (UNDP) from supporting Iran. The country reportedly opposed more than $7.6 million-worth of environmental projects in 2014, including schemes to boost biodiversity and assist the country to carry out environmental assessment.

Contacted multiple times, the Gef did not respond to a request for comment on whether the resumption of sanctions may have affected current projects. The US state department also did not reply.

Sanctions ultimately will have a heavy impact on Iran’s national climate pledge, known in UN jargon as Nationally Determined Contribution, according to the national government.

In the document submitted to the United Nations in 2015, the government committed itself to cutting greenhouse gas emissions by 4% by 2030. That figure jumps to 12% “subject to termination and non-existence of unjust sanctions”.

The Iranian delegation used a recent UN conference in Katowice in December to urge other countries not to follow the “country addicted to withdraw[ing] from international agreements”.

“No political pretext or excuse should be used to block allocation of financial flow, knowhow, technology, [or] support to developing countries as well as the Islamic Republic of Iran” diplomat Naser Moghaddasi told the UN plenary on 12 December.

This outreach has found traction. One of the key architects of the 2015 nuclear deal, the European Union has been among the first to explore mechanisms to bypass sanctions.

Among a number of initiatives, the block is pushing for member-state organisations to partner with Iranian stakeholders in order to “contribute to enhancing Iran’s self-reliance in the areas of addressing water pollution and integrated water resources management, air pollution, waste management and soil degradation.”

The move follows an EU-Iran framework for technical cooperation on the environment signed by Iran’s vice president for environment Masoumeh Ebtekar and EU environment commissioner Karmenu Vella in Brussels in September 2016.

An EU proposal for a ‘special purpose vehicle’ to facilitate humanitarian transfers to Iran presents further optimism that the block is willing to trade with the country, said Hakim.

That gives Iranians some hope, said Sabbaghzadeh: “The last sanction came, it was like: boom! A slap in the face. It was so strong. After a while, people were like: this is not new. We’re going to get around, some way or the other.”