Oil-rich country’s resistance to welcoming findings of science report on 1.5C warming has marked it out from poorer countries 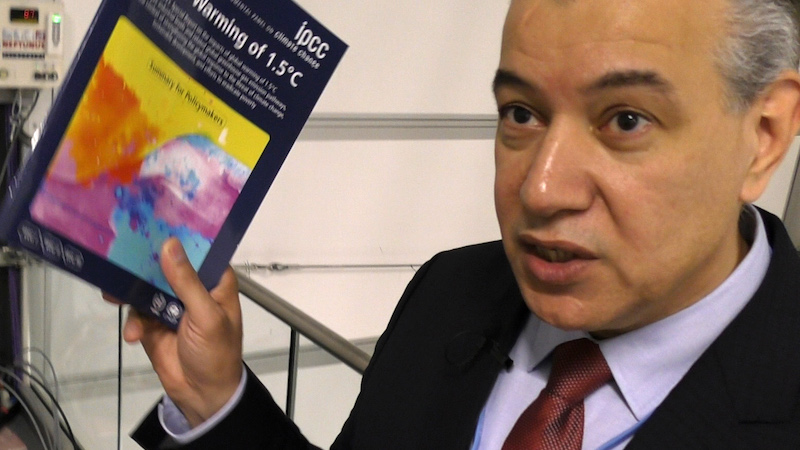 By Karl Mathiesen and Sara Stefanini

Competing visions of climate justice have alienated Saudi Arabia from other developing countries at UN climate talks in Poland.

After a heated debate on Saturday night failed to adopt the conclusions of a scientific report on the effects of warming the planet by 1.5C, Saudi Arabia’s chief negotiator said scientists had painted a picture that ignored the historical responsibility of major polluters.

In an interview with Carbon Brief, Saudi Arabia’s lead negotiator Ayman Shasly said the Intergovernmental Panel on Climate Change (IPCC) report – released in October – “shows that [halting warming at 1.5C] is achievable, it’s doable, let’s all do it together, which is not fair. What is the equity in this? Where is history in this?”

He said responsibility for constraining the use of fossil fuels should not fall on developing countries, including Saudi Arabia, but on the largest, richest countries with long histories of emitting carbon, which include the US, Europe, Canada, Australia and Japan.

“They are the one in question, not us. They are the one who should really make the space for all of us, as developing countries, to at least develop to something closer to the level of development that is enjoyed by the industrial world,” said Shasly, whose country is the second largest oil producer in the world.

But during the debate on Saturday night, which revolved around whether countries would “note” or “welcome” findings the IPCC released in October, it was developing countries that spoke most loudly in favour of the science.

In a speech to the UN body on Wednesday, Fijian prime minister Frank Bainimarama will also call for the report to be welcomed.

“Let me make this perfectly clear. Fiji welcomes the IPCC Special Report on 1.5 degrees. And we thank the thousands of scientists who contributed to it,” he will say. “We must all accept the science, which is irrefutable. We accept science in virtually every single other form of human endeavour. So simple logic dictates that we must do it when the evidence of human-induced warming is so conclusive.”

All would pay a price if the the science was ignored, Bainimarama said on Tuesday: “If you think you’re safe in your environment, if you’re not vulnerable, you will be vulnerable if we do not follow what the scientists told us.”

CopCast: Can Talanoa help the climate?

Our daily podcast from Cop24: Michael Lazarus talks to Megan Darby about a climate meeting that tried to break down the formal boundaries with Pacific twist

Costa Rica’s environment minister Carlos Manuel Rodríguez told Climate Home News that Saudi Arabia’s resistance, which it shared with Kuwait, Russia and the US, had marked it out from other developing nations, which negotiate at climate talks together under a 134-country bloc known as the G77 and China.

“This is where I think we have the big difference with some of the G77 members,” Rodríguez said. “I’m not that surprised that once more countries have expressed little commitment to comply with the scientific recommendations… there shouldn’t be any possibility to question the information.”

The IPCC concluded climate-related risks would continue to worsen with a temperature rise of 1.5C, but remain lower than at 2C. Impacts would disproportionately impact “disadvantaged and vulnerable populations, some indigenous peoples, and local communities dependent on agricultural or coastal livelihoods” the report said. It also found the economic growth of countries in the tropics and southern hemisphere subtropics – a region almost entirely made up of developing countries – would be most impeded.

But it also found that rapid transformation would be required in every country, with fossil fuel use effectively ended by mid century.

This pressure offers developing countries “the opportunity to leapfrog into this century”, said François Martel, secretary general of the Pacific Islands Development Forum. “You don’t see any issues in relation to this report from India, from China, from south America and Africa. Because it’s not a question of economy, it’s a question of survival.”

Melchior Mataki, the Solomon Islands’ head of delegation, said the Saudi position was “akin to saying ‘OK, we can just continue to face the negative consequences of climate change, and probably even lose our economies as well’”.

Mataki said the Solomon Islands would be pushing for the Polish presidency on the UN summit to include a passage welcoming the report in the final declaration of the meeting. An EU source said they were also lobbying the presidency for “welcome”, and others are expected to join in.

Shasly told Carbon Brief that Saudi Arabia had asked for a final decision that would “note” the report.

That sets the stage for a political showdown on Friday night when the meeting is scheduled to end and where the adoption of a rulebook for the Paris Agreement is the main point of order.