A major climate report in October found shifting to a green economy risked social disruption, but French senators told a scientist they were ‘powerless’ to respond 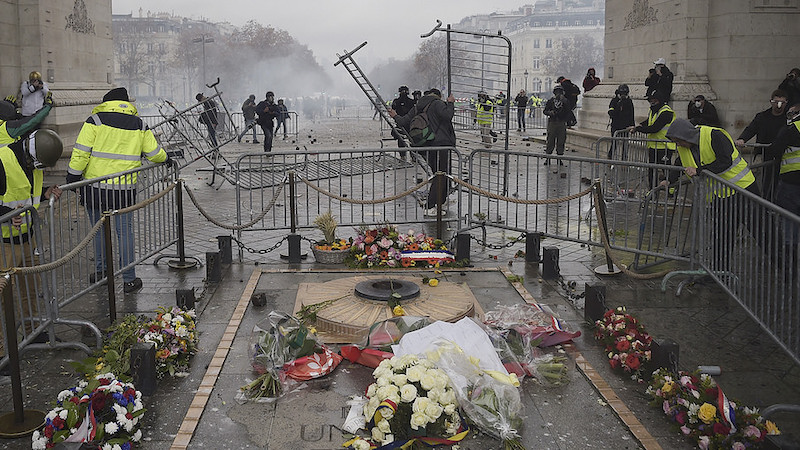 Demonstrators stand next to metal barriers around the tomb of The Unknown Soldier at The Arc of Triomphe during a protest of yellow vests (Photo: Lucas BARIOULET/AFP)

Just a few months before protests exploded across France, the country’s senate was warned the shift to a clean economy risked social disruption, according the scientist who presented the evidence.

Valérie Masson-Delmotte, a French climate scientist and co-chair of the Intergovernmental Panel on Climate Change (IPCC), told Climate Home News’ podcast CopCast that members of the senate committee of sustainable development had been “surprised” by findings in a major report in October, which said green policies must be coupled with public consultation or face social resistance.

“They expressed how difficult it is for them as members of the senate to think on how to implement transitions. They also said they were powerless. They didn’t know how to change things, basically,” said Masson-Delmotte.

France has been gripped by rioting for three weeks, after Emmanuel Macron’s government announced a tax on diesel fuels designed to reduce pollution.

Despite a retraction of the policy this week, large demonstrations are expected in the French capital over the weekend. On Saturday morning, police arrested hundreds of protestors from the gilets jaunes (yellow vests) movement in Paris.

Masson-Delmotte, who spoke to CHN’s podcast at UN climate talks in Poland, said she had met protesters near her home in Paris.

“It was interesting to understand how much they don’t trust policy makers, how they don’t trust experts,” she said. “What is striking is the inability of the usual democratic representatives, elected people, trade unions – the usual instruments of a democracy – to deal with the situation. There is a lack of dialogue and a lack of perception of representation of a fraction of the population which believes they are trapped when the price of oil goes up and they believe they have no alternative.”

The IPCC’s special report in October found social barriers to change could be overcome through strong, consultative leadership, “including citizens and allowing for participation for minorities, and having them provide input and endorse it”.

Masson-Delmotte called for the creation of citizens’ assemblies, borrowing a model created in Ireland, in order for the political class to better understand social anxieties and needs.

The protests in France coincide with UN climate talks in Katowice. The Polish host government has used the talks to highlight the impact on workers and other groups affected by the closure of mines or other measures necessary to avoid dangerous climate change.

“It’s … tragic to observe when I live and work in France and I see that our country failed to have a sustainable development approach that pays attention to the ones who are most vulnerable to policies,” said Masson-Delmotte. “I think our senators reflect society and maybe the older generation of society, so they have not yet fully understood the implications of climate change and how deep it goes into thinking differently the way we build a new future.”

France’s standing committee on sustainable development did not respond to a request for comment.