Katowice brief: Who is the UN’s climate dealmaker? 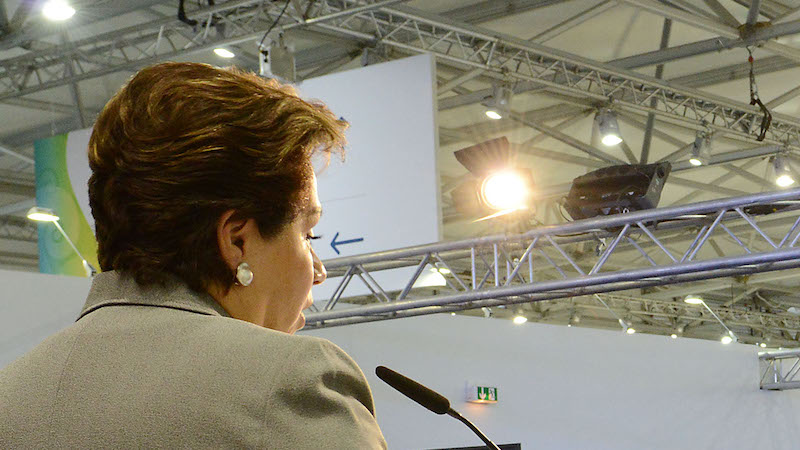 The most important talks on global warming in years kicked off on Sunday and the impacts of climate change “have never been worse”, according to Patricia Espinosa.

The UN climate chief urged countries meeting in Katowice, Poland to come up with a set of rules that will make the Paris climate deal work.

If these talks fail, the promise of an international deal to control carbon emissions will wither. With stark disagreements brewing and leaders thin on the ground, Espinosa will have a crucial role behind the scenes: brokering, cajoling and nudging countries toward compromise.

Sara Stefanini spoke to the Mexican diplomat and the people around her and discovered a friendly, subtle operator who may need to find her inner bully.

CopCast: Episode one – What are we doing in Katowice?

Start with a stumble

There is always some dispute over the official order of business at the start of a UN climate summit, and Cop24 was no exception.

This time, it appears it was Turkey kicking off, in a bid to change its anomalous status under the UN climate convention as a developed country.

After a two-hour delay, the conference started at noon on Sunday. This was an extra day of talks, added for fear the massive workload would not get finished. Clock’s ticking.

Turkish NGOs were not impressed by the argument Turkey needs access to climate finance, telling their government to stop moaning and start stepping up ambition (I paraphrase). While it is not eligible for the Green Climate Fund, it is a major beneficiary of EU cash.

After Brazil caused an upset last week by reneging on its offer to host Cop25 in 2019, four volunteers have stepped up.

Costa Rica, Guatemala, Honduras and Chile showed willing, subject to financial support, to take on the responsibility. Carlos Alvarado Quesada, president of Costa Rica, even pinned the announcement to his Twitter homepage, comparing the endeavour to the country’s proudest achievement, abolishing its armed forces.

It is now for the regional group of Latin American and Caribbean countries to make a decision.

The draft ahead of their Buenos Aires meeting was weak on climate change, but G20 leaders pulled stronger language out of the bag in the final communique.

It references the recent Intergovernmental Panel on Climate Change on the science of 1.5C global warming and the Hamburg Action Plan, with the US isolated in objection to the Paris Agreement. France and China’s joint declaration may have helped to shift the dial towards ambition.

None of the big guns are expected to make the long trip to the high-level segment here in Katowice on Monday. Heads of state and government from 29 countries are due to attend, listed here.

The presidents of the last four UN climate summits have also made a joint statement, calling for greater ambition.

Using significantly more urgent rhetoric than the current Polish presidency, which has focused on the technical task of finishing the Paris rulebook, they called for countries to submit enhanced or updated national pledges by 2020.

“We… are extremely concerned about the climate crisis,” wrote the former ministers of Peru, France and Morocco, and the Fijian prime minister.

Michał Kurtyka, confirmed today as Cop24 president, welcomed their support in a press conference at the venue. “It’s team work,” he said.

Having mulled it over for months, the Polish government is finally due to release its political statement on the ‘just transition’ on Monday. A leaked draft seen by CHN called on governments to “recognize the challenges faced by sectors, cities and regions in transition from fossil fuels and high emitting industries”, and “ensure a decent future for workers”.

Environmentalists accused Poland of “high-jacking” the concept of the just transition, which had originally been coined by US trade-unions to boost climate action to save jobs in vulnerable countries.

The move will please Poland’s powerful coal trade-unions. At its industrial peak in the 1980s, Katowice counted 14 active coal mines. Now it is two – and the remaining miners are terrified of losing their jobs to EU regulations. Earlier this year, Natalie Sauer profiled a changing city.

Jargon-buster
International climate talks are fiendishly complex and stacked with jargon. We’ve created a climate diplomacy glossary to help you out. It’s a living document, so if you see an acronym you don’t understand, get in touch.

In the run-up to Cop24, I’ve been attempting to learn Polish through a popular language app. Keep your expectations low; I’ve just been muttering at my phone rather than holding conversations with real people. The grammar remains a mystery. But I have picked up a few phrases and will share one with you each day.

For a starting bonus, this YouTube clip tells you how to pronounce Katowice.

Polish phrase of the day

This newsletter was written with help from Karl Mathiesen and Natalie Sauer.