Call for climate justice as millions brace for intense storms

Typhoon Mangkhut and Hurricane Florence are set to make landfall on opposite sides of the world, bringing destruction likely exacerbated by climate change 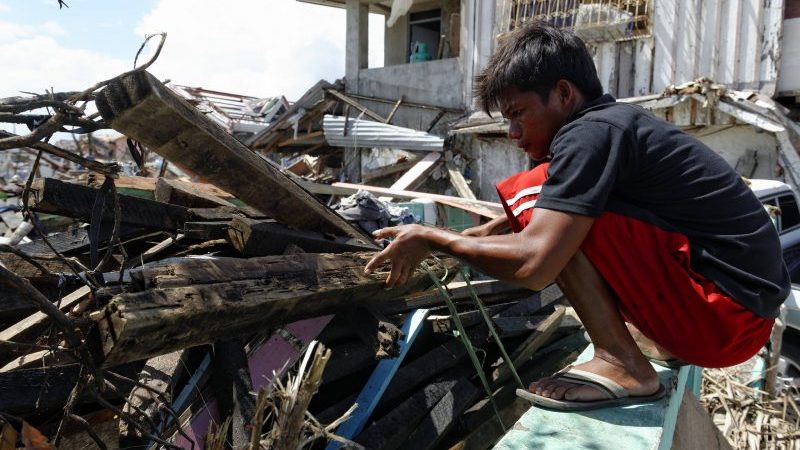 The wreckage of Typhoon Haiyan in 2013. Parts of the Philippines are still recovering (Pic: ILO/Marcel Crozet)

Millions of people braced for two destructive tropical storms making landfall in the Philippines and US on Friday.

Seaside towns evacuated and farmers scrambled to harvest rice early in the path of Typhoon Mangkhut, a category 5 storm tracking across northern Luzon island. It is almost as strong as Haiyan, which killed more than 6,300 Filipinos and displaced some five million in 2013.

The US Carolinas faced up to a metre of rainfall from Hurricane Florence, sparking fears of flooding, destruction and pollution.

In both places, the looming crisis raised questions about the influence of human-caused global warming, resilience to disaster and environmental justice.

“Every super storm will have the fingerprints of climate change. As such, every life lost, every acre of crops destroyed, every house blown away, every bit of culture forever gone, is partly because of the injustice of climate change,” he told Climate Home News.

Greenpeace and other activists are suing oil and coal majors through the Philippines Human Rights Commission over their role in causing global warming impacts.

Saño added: “Running away from super storms, counting the dead, recovery, rebuilding, rehabilitation has become a way of life for us. We refuse to accept this, and our human rights case against the carbon majors is our way of telling the world that we will not take this injustice just sitting down.”

Latest image of intense Typhoon #Mangkhut on its final approach to landfall over the #Philippines. pic.twitter.com/6zbcGAFuxF

Florence’s intensity had fallen to category 1 by the time it made landfall, but authorities warned 3-metre storm surges and heavy rainfall made it a dangerous storm.

Despite the US’ relative wealth, it faces the same challenges as the Philippines in responding fairly and protecting the poorest, said Ilan Kelman, a disaster risk expert at UCL.

“Vulnerabilities tend to be similar around the world. Although we perceive the US as being a rich, affluent and prepared country and the Philippines as a poor and vulnerable country, there is actually not that much difference on the ground in what they experience,” he told CHN.

Adding to the US challenges is a politically motivated aversion in some areas to acknowledging climate science. In 2012, North Carolina passed a law banning the use of sea level rise predictions in coastal policy, on the basis they were too uncertain and would imply costly infrastructure upgrades.

In an article for the New York Times, Stephen Strader of Villanova University said developers suffered from “disaster amnesia”, allowing a building boom along the coast despite extreme weather risks.

Ironically, a conference on climate resilience in the Carolinas was postponed to avoid storm disruption.

A study from Stony Brook University compared the forecasts for Hurricane Florence with a scenario in which human activity had not warmed the planet. It estimated climate change would bring more than 50% heavier rainfall at the wettest parts of the storm and increase its diameter at landfall by 80km.

World Weather Attribution, a collective of scientists who quantify the influence of climate change on specific weather events, said it lacked the resources to independently analyse this hurricane. But the finding that global warming makes tropical storms wetter is well established, the statement added.

“What we can say with high confidence is that when there is a hurricane, the rainfall intensity is higher than it would have been without climate change,” said Friederike Otto, a leading contributor to the initiative from Oxford University.