Let down by Trump on climate, China goes around him in California

At the Four Seasons hotel in San Francisco, the superpower and the US state cut diplomatic deals that fly in the face of White House policy 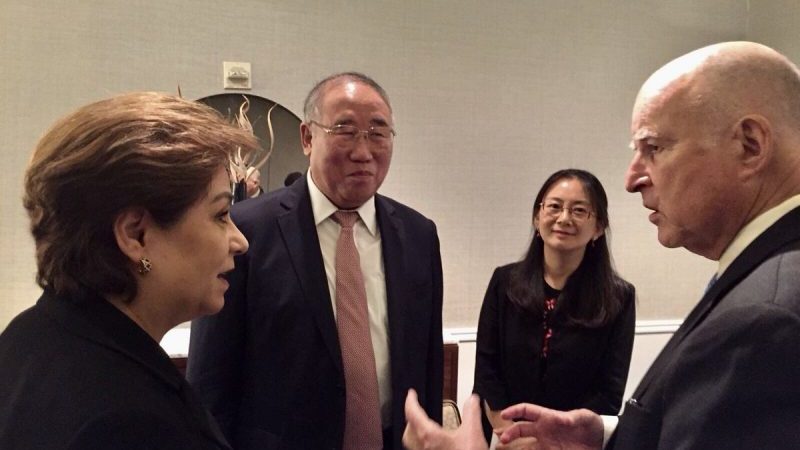 By Karl Mathiesen in San Francisco

In downtown San Francisco, the fifth floor of the Four Seasons hotel has been transformed into a Chinese diplomatic outpost.

Translators and staffers chat excitedly in the corridors; the great and the good of global climate governance appear one by one; and behind doors that swing open and then quickly closed, officials from the superpower and the Californian government cut climate deals that fly in the face of White House policy.

California governor Jerry Brown’s Global Climate Action Summit, which is being held just a block away, has long been anticipated as a domestic riposte to the Trump administration’s climate reverse.

On Wednesday US cities, states and businesses released a report detailing how they were upholding the US side of the Paris bargain, in spite of the White House.

And the Chinese are making their own statement in San Francisco. More than fifty Chinese officials, academics and business leaders are listed on a three day programme of events. With their staff, the Chinese are one of the most significant non-US presences at the summit.

In remarks to a room filled to standing at the back, Brown thanked the “very large Chinese delegation”, which included Xie Zhenhua, China’s long-standing climate majordomo and the top official in the delegation.

“Just the fact that you are here, in such numbers, and people of such importance and expertise says volumes about the commitment of China to confronting climate change,” he said.

In 2015, Chinese and US presidents Xi Jinping and Barack Obama signed a bilateral deal that set their targets for emissions curbs and laid the foundation for the Paris Agreement.

Few people outside those governments understand better than Laurence Tubiana how difficult it was to hold the US-China compact together in the final days of talks in Paris. On Wednesday, the former French diplomat, now head of the European Climate Foundation, watched as Brown and Xie signed multiple cooperation deals on research, industry and climate politics.

“I think [the Chinese] are really lost,” Tubiana said. “I think they struggle to recognise that the US has disappeared on [climate change]. They just can’t accept that totally, so they are looking for somebody to talk to. I think that’s why they invested so much in Jerry Brown.”

Brown and Bloomberg: Even without the Trump administration, the US is upholding the Paris Agreement

California and China first signed a climate deal in 2013. But the timing of this renewal is significant. The foundations were laid last year, when Brown flew to Beijing to meet President Xi, less than a week after Donald Trump announced the US would withdraw from the Paris.

“I think for the moment it’s a placeholder and [China] will long for a new administration… but they play their cards too and California is an important place,” said Tubiana.

One of the mantras of the San Francisco summit is California’s position as the fifth largest economy on earth. “We’re not small potatoes,” said Brown. “We’re big.”

A few minutes earlier, when Brown had risen to address the delegation, laughter rippled through the crowd. The Chinese-to-English interpreter had mistranslated his introduction, calling Brown the “president” of California.

California remains a state. But it’s a state that a major superpower, in a time of growing international distrust, is prepared to conduct diplomacy with in defiance of White House policy.

“It’s really, really incredible… It’s just a major event,” said Tubiana, before drifting away to catch up with her old friend Xie.

In his opening remarks, Xie said he had spoken with Brown for more than two hours on Tuesday afternoon.

“We believe that under the current bilateral situation between China and the US we can find the best way to benefit people of both our countries,” Xie said. “We are going to work together for this consensus that we have built.”

By reaching out to Brown, Xie was working around the Trump administration, which has pursued a hot and cold trade war with the US’ major competitor and recently watered down the carbon pollution law that underpinned the US-China climate pact.

Xie Yuan, vice president of the Chinese People’s Association for Friendship with Foreign Countries, said: “We are glad to see that both countries’ cooperation now has deepened and reached subnational government.”

Xie Zhenhua added that China considered itself a “leader in global action on climate change” and announced the creation of the Global Climate Action Initiative, which will channel Chinese philanthropic funding to support the government’s low carbon development push.

Want climate news in your inbox? Sign up here

That was significant, said economist Nicholas Stern. China has long been reluctant to declare itself a frontrunner on climate change.

“It’s so important for the world that… China is in a leading position [on climate change],” he said. Adding that China’s 14th five year plan for 2021-2025 and its multi-trillion dollar belt and road overseas investment initiative would shape the “future of the world”.

Brown agreed. Two days after setting one of the most ambitious climate targets in any major developed economy – California will aim for zero emissions by 2045 – he said:  “We have no chance of getting there unless China invests hundreds of billions of dollars in all the technologies that will be needed.”

For example, Brown said, China must continue to mandate ever-higher quotas for its car makers to produce electric vehicles. A prospect that terrifies European automakers, who are behind the technological curve and fear missing out on the great Chinese car boom if they cannot build enough green cars.

“We need zero emissions cars. China has 1.5 million. We need China to have 100 million. And in California we want at least 5 million electric cars,” said Brown. “We can only do that if China continues on  a parallel path and even increases ambition, requiring auto companies, whether Chinese, European or American, in order to sell any cars in China, they should be selling much more electric cars.”

This mutual dependence in the face of mutual threat was a recipe to overcome the two countries differences, said Brown.

Xie Yuan agreed: “Both China and the US have a shared destiny and shared future.”