Secretary-general to throw entire UN into fight against ‘suicidal emissions’ 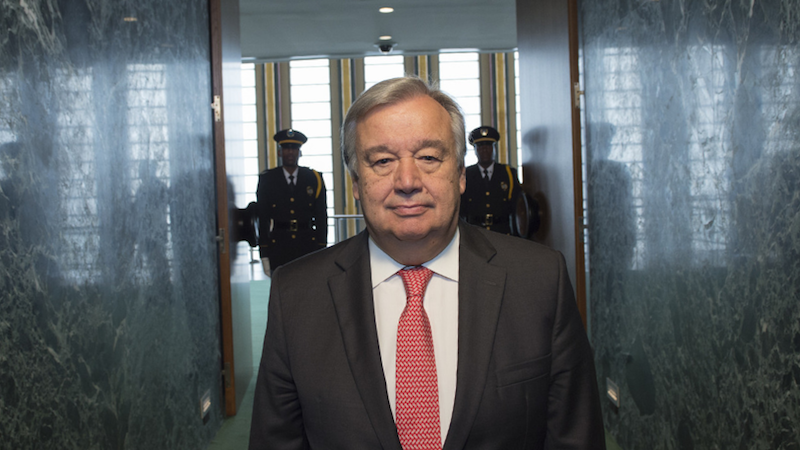 In a speech on Monday, the world’s leading diplomat Antonio Guterres will outline plans to accelerate humanity’s response to climate change.

The UN secretary general will announce details of a summit of global leaders in New York in a year’s time.

He will use his own office to compel and corral world leaders, heads of industry, finance chiefs and local actors to cooperate on climate change, both at the summit and as an ongoing programme of engagement.

His aim will be to stimulate the investment of trillions of dollars into clean energy and low-carbon development by putting local and national decision makers into direct contact with investment giants.

Become a CHN patron for as little as $5 per month to help us keep bringing you the most in-depth climate politics news from around the world.

Climate Home News understands Guterres will draw all agencies of the UN into the fight to control greenhouse gas pollution and respond to its already catastrophic effects.

“It’s time to get off the path of suicidal emissions,” Guterres said in a trailer for the speech, released on Sunday.

On Monday in New York, I will sound the alarm on the global emergency that is climate change, and outline how we can win the race for our future. Watch live: https://t.co/iMzE2WxSNy #ClimateAction pic.twitter.com/aKQlC2oMvQ

Guterres will make what his minders are advertising as a “major speech” during the build up to another climate summit, to be hosted this week in San Francisco by California governor Jerry Brown.

Guterres has led the UN at a time when the effectiveness of multilateralism has been challenged by some of its most powerful members, most notably US president Donald Trump.

Cooperative efforts to stop climate change, a quintessentially global problem, have so far proven too slow. Another round of UN climate talks ended in Bangkok on Sunday after what observers at the World Resources Institute called “lacklustre” progress.

Climate change is “running faster than we are”, Guterres said in response to recent floods in India.

It is not clear whether Guterres will use his 2019 summit to leverage climate finance for the developing world in the same way his predecessor Ban Ki-moon did in the build-up to the 2015 Paris climate talks. A lack of certainty over future cash flows hampered the talks in Bangkok.

Last Wednesday, at the launch of a report that found acting on climate change could benefit the economy to the tune of $26 trillion each year, Guterres said: “Runaway climate change is a real possibility, with severe implications for communities, economies, peace and the security of nations… We must act with greater ambition and urgency.”