Armed with faded copies, four diplomats write the rules of the Paris Agreement 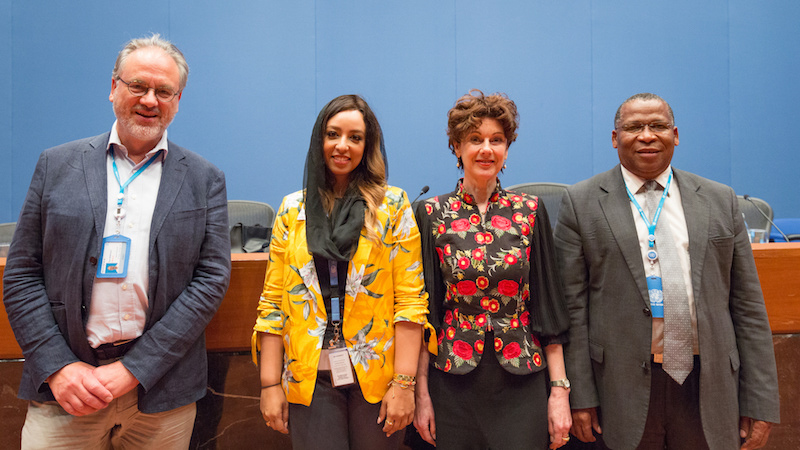 Paul Watkinson has a faded blue and white volume of the Paris Agreement on the table in front of him. Sarah Baashan pulls hers out of a handbag: it has a plastic cover and coloured index tabs.

Jo Tyndall quips that she sleeps with a copy under her pillow, although it’s unclear that any of them have slept this week.

Together with Emmanuel Dlamini, these are the presiding officers responsible for delivering a rulebook for the historic climate pact. Midway through negotiations here in Bangkok, they sit down as a team with Climate Home News.

So how is it going? Late on Thursday night, they published a compilation of drafts from dozens of strands of talks: it ran to 307 pages. That will need to be streamlined before ministers can thrash out the political choices at the critical December summit in Katowice.

We’re in Bangkok this week: Sign up for daily updates from the talks

But don’t judge progress by the page count, says Tyndall. She repeats almost word-for-word the measure of success in Bangkok she set out last month: “An agreed basis for negotiations” that “narrows down” the options – a cautious formula that reflects the inherent uncertainty of a process with 195 countries.

“We are getting on the road towards that but we are not there yet,” she says. “Broadly speaking, we think the willingness and the engagement is very much there; parties are working incredibly hard and long hours.”

French diplomat Watkinson chimes in: “These are shared objectives. Each of us has got text that is going through iterations. They need to go further before we leave Bangkok.”

A key principle is that progress must be “balanced” to reflect the competing priorities of different blocs: there can be no deal on carbon accounting rules without commitments on the transfer of finance from rich to poor countries, for example.

In some forums, CHN hears, this has been interpreted as dedicating equal time to each subset of the agenda. But the focus should be on the outcomes, says Dlamini, who works for the eSwatini government.

As chairs, the four are responsible for the pace of the negotiations, says Baashan, a Saudi diplomat. “Whenever something is lagging behind, we go in and try to address it.”

All this needs to be forged into a coherent package, says New Zealand’s Tyndall: “Everything is linked to everything else. That is why we need to coordinate with each other, which we are doing daily and multiple times each day.”

That is how they work, but are they winning? Yamide Dagnet of the World Resources Institute warns that progress looked “uneven” after the Thursday night document release, with areas of divergence that will require political and diplomatic engagement to resolve.

“We knew it would be very hard and we appreciate that negotiators worked night and day, showing eagerness to progress, but this may have come too late and is not where we had hoped to be. But we should not lose faith yet in still adopting a clear, robust and cohesive package in Katowice,” she says.