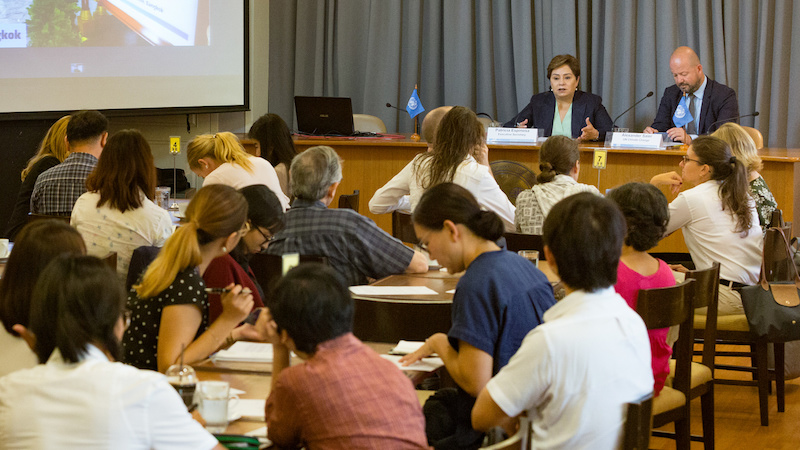 The UN’s climate chief called on negotiators to take a “decisive step” at talks on the global climate regime this week in Bangkok.

After failing to make enough progress in Bonn in May, the summit is governments’ last shot to advanced stalled talks in the run-up to COP24 in Katowice, Poland in December.

UN chief Patricia Espinosa told a press conference on Sunday that it was “critical” that the week-long meeting ends with a draft of the rules of the Paris Agreement that can serve as the basis for the Polish talks.

“The texts capturing progress to date are not yet refined enough for this purpose,” she said.

More than 1400 delegates will be attempting to reduce hundreds of pages embodying different interests to a single, coherent paper upon which all members can agree. The rules will describe measures governments must take to achieve the Paris Agreement goal of keeping the global temperature increase “well below” 2C, aiming for 1.5C.

An agenda for a preliminary meeting on Monday highlighted points of particular concern. Negotiators met to discuss technicalities of how countries monitor and report their greenhouse gas emissions, keep track of climate change efforts and transfer funds from rich to poorer countries.

Of particular contention is the amount of legroom available to developing countries to implement their standards. A source at the Monday meeting said several suggestions had been put forward to break the diplomatic impasse.

Three things this week’s Bangkok climate talks must get right

Chair of the least developed countries group Gebru Jember Endalew urged delegates to avoid “a last-minute rush in Katowice so that the voices of poor and vulnerable countries are fully heard”.

Moreover, Endalew called negotiators to focus on climate finance, a sticking point during the Bonn talks.

“Climate finance enables developing countries to avoid repeating a history of high-carbon development pathways, and to protect communities against the dire consequences of a climate crisis they did little to cause,” he said. “Trillions of dollars need to be delivered to achieve the goals of the Paris Agreement. Deciding rules to ensure predictability of funds will also be key to developing countries planning effectively for climate action.”