Nicolas Hulot had not made the French president aware of his decision to quit, he told radio presenters, adding his time in office had been an ‘accumulation of disappointments’ 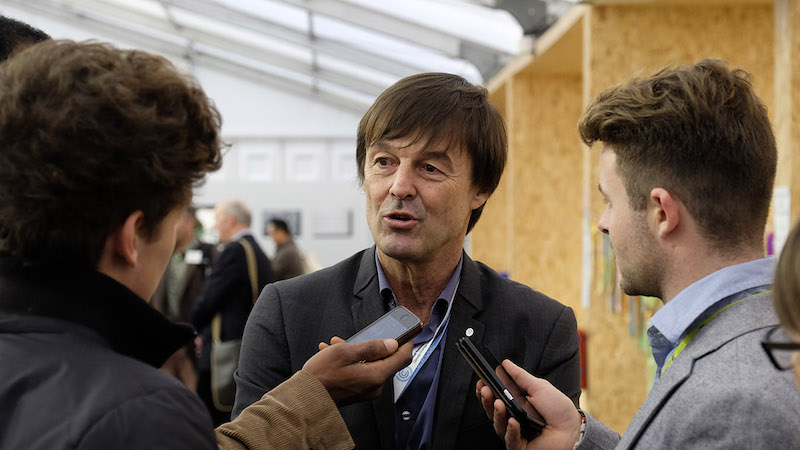 French environment minister Nicolas Hulot has resigned live on national radio in a surprise move that will come as a blow to president Emmanuel Macron’s green credentials.

Hulot, a former broadcaster known in France for his wildlife and conservation documentaries, told France Inter that he had taken the decision to quit the government, saying he had felt alone in pushing for more ambitious climate policies and an energy transition to take place in France.

“I don’t want to lie to myself any more. I don’t want to give the illusion that my presence in the French government shows that we are doing what it takes to face these challenges. I have taken the decision to leave the government,” he said.

“This is about being sincere with myself,” he said.

Hulot said he had not told president Emmanuel Macron or prime minister Edouard Philippe about his intention to resign, which also came as a surprise to the two journalists interviewing him on the morning news programme.

Hulot was made environment minister for the first time in May 2017 after deciding not to run as a presidential candidate a year earlier.

As part of Macron’s government, he was forced to accept the implementation of the EU-Canada free trade agreement and a delay in reducing the share of nuclear power in France’s energy mix to 50% by 2025 – decisions to which he publicly objected. Rumours of Hulot’s imminent resignation were common during his time in office.

Describing his “immense friendship” with Macron’s government, Hulot said that although he had no regrets in joining the government he had suffered from his time in office, increasingly accommodating himself with “small steps” at a time when “the planet is becoming a sauna and deserves that we change the way we think and operate”.

“Am I up to the task? Who would be up to this task on their own? Where are my troops ? Who is behind me?”, he asked.

Hulot admitted he had been thinking about resigning throughout the summer but that it was the presence of hunting lobbyist Thierry Coste at a ministerial meeting to which he was not invited that prompted him to take the decision.

“We have to talk about this because it’s a democratic issue to ask who holds the power and who governs in this country,” he told France Inter.

Hulot said his time in office had been “an accumulation of disappointments”, citing France’s failure to move away from nuclear power. He said he felt like he had “a bit of influence but no power”.

He stressed that the transition to a carbon-free world was a “collective responsibility” and that the dominating liberalism model had to be put into question if the world was to move to a green economy.

“I hope that my resignation will lead to a profound introspection of our society on the reality of the world,” he said, pleading all sides not to use his resignation as political tool.

Benjamin Griveaux, spokesman for the French government told French TV channel BFM TV he regretted the way Hulot has chosen to make his decision public, adding: “I think it would have been basic courtesy to warn the president and the prime minister.”

Opposition politicians were also quick to respond to the announcement.

The leader of the opposition les Republicans party Laurent Wauquiez, told RTL radio that he understood that Hulot felt he had been “betrayed” by Macron.

“I don’t necessarily share his opinions, but I can understand that he feels betrayed — like many French people — by the fact strong promises were made but the impression that these promises have not been kept.”

Ségolène Royal, former environment minister under the previous socialist government during which the Paris Agreement was signed, wrote on twitter: “I respect Nicolas Hulot’s choice. As I know from experience, he has proved that the battles for the environment are very difficult but so crucial.”

“France needs to keep the climate leadership and be ready to fight for those forces around the planet that hope for a better future.”

Yannick Jadot, from the French Green party, said: “The departure of Nicolas Hulot from the government is the consequence of the absence of environmental policies from this government.”

According to the Reuters news agency, Merkel said “I’m not particularly happy about these new proposals. I think we should first stick to the goals we have already set ourselves. I don’t think permanently setting ourselves new goals makes any sense.”

Germany will not meet ambitious targets it set for itself to meet by 2020. Last month, Merkel said Germany’s existing 2030 target would be “very, very challenging” to meet.

This article was first published on DeSmog UK. Additional reporting by Karl Mathiesen.