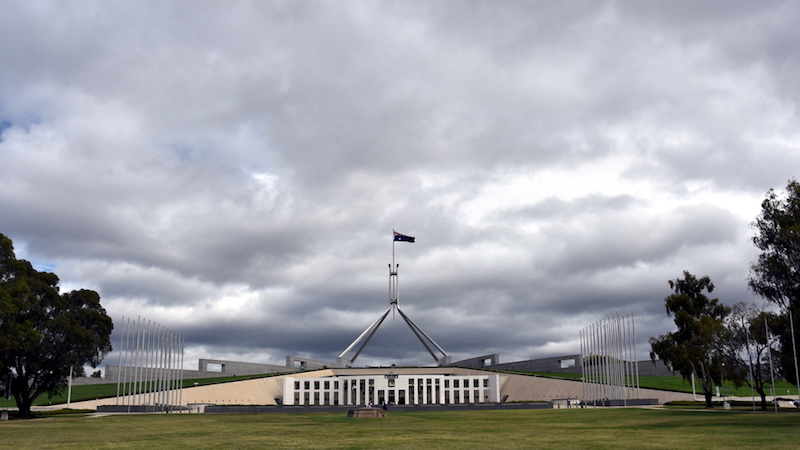 After a decade of political infighting, Australia's Parliament House has failed to produce a solution to the country's high energy bills and rising emissions (Photo: Deposit Photos)

Australian conservatives cited the US withdrawal from the Paris Agreement this week as they blocked their own government’s attempts to cut carbon.

In a press conference on Monday, Australian prime minister Malcolm Turnbull told reporters a “small” number of government MPs would not support the National Energy Guarantee (Neg), which would legislate an emissions reduction target for the electricity sector.

With a house majority of one, Turnbull said, the Neg was unpassable.

“We continue to talk to our [government] colleagues about it, but we are not going to propose legislation purely for the purpose of it being defeated,” he said.

Those colleagues are a conservative wing of his ruling coalition, led by the man Turnbull ousted as prime minister in 2015 – Tony Abbott.

Referring to Donald Trump’s promise to withdraw the US from the Paris climate deal, Abbott tweeted on Sunday: “Emissions targets that made sense three years ago when all countries were supposed to be in Paris and we didn’t need policy change and wouldn’t face economic dislocation do not make sense now.”

The next day, Turnbull announced he would withdraw the Neg, along with its promise to cut electricity emissions by 26% below 2005 levels by the end of next decade. He instead proposed a raft of measures that took aim at high power prices.

Alden Meyer, director of strategy and policy at the Washington DC-based Union of Concerned Scientists, said the U-turn was a “troubling development”.

Asked whether Trump’s Paris withdrawal was strengthening opponents of climate action around the world, Meyer said there were “troubling signs in the Brazilian presidential race”, where a leading candidate has advocated following the US out of the deal. But he said most countries seemed willing to stick to their current, voluntary pledges to the Paris deal.

That committent will be tested, however, when countries are asked to raise ambition in the coming years even as the US moves backwards.

“I can envision anti-climate action interests asking ‘why should we do more, when the world’s largest economy is proposing to do less?’ It’s a phony argument, of course, as the costs of climate inaction swamp the short-term costs associated with reducing emissions,” said Meyer.

The shelving of the Turnbull government’s major energy reform comes in the same week the Trump administration will announce a major rollback of US climate policy.

The revision of the Clean Power Plan, which was the centrepiece of Barack Obama’s climate legislation, will devolve decisions over coal emissions to states, according to Politico. This loosening of federal controls mean the cuts that would have achieved the US Paris targets are now in danger, experts have warned.

The cuts to Australia’s emissions Turnbull had intended to pass into law would have likely been inadequate to meet the country’s pledge to the Paris deal.

But without any plans to legislate targets, “Australia now has no hope of meeting the Paris climate goals,” said Greens climate and energy spokesperson Adam Bandt.

On Monday night, deputy prime minister Michael McCormack gave a disastrous interview to Sky News in which he argued that Australia didn’t need to legislate for emissions because it was already going to meet its Paris targets. When pushed on his source, he said that was based on data from “those people who measure emissions”.

‘It’s based on the data that is produced by those people who measure emissions.’

In response to questions from the media on Monday, Turnbull said: “We are part[y] to the Paris Agreement and the government is committed to that.”

With the government’s emissions targets now pushed aside indefinitely, campaigners are looking to an election that must be held next year to bring policy into line with promises.

“The Australian Conservation Foundation, and our half million supporters, will be highly active during the upcoming federal election to hold all our elected representatives to account for their position on climate change,” said chief executive officer Kelly O’Shanassy. “If they do not measure up we will say so, and vocally, within the communities they purport to represent.”

Labor leader Bill Shorten gave a press conference on Monday standing in front of a solar farm. He said Turnbull should “show real conviction” and stand up “to the people in his party who want to hold the future back”, he said. Shorten invited Turnbull to talk to Labor and work to find bipartisan support.

Abbott, meanwhile, argues an electoral fight on climate change is the only way for the government to stay in power next election.

Turnbull’s humiliation on Monday is the latest in a decade of bloody feuds with Abbott over climate change. In 2009, Turnbull lost the leadership of the opposition Liberal party to Abbott after Turnbull backed the then-Labor government’s emissions trading scheme.

At that time, Turnbull said he would not lead a party that was not as committed to action on climate change as he was. Now, a reporter at Monday’s conference pointed out, he does. “I enjoy the confidence of the cabinet and the party room,” the prime minister responded.

Turnbull’s capitulation has prompted speculation of a leadership contest in the coming days, with home affairs minister Peter Dutton seen as the most likely champion of the party right.

In the past few days, both Dutton and Turnbull have tried to quell speculation of a leadership challenge. In 2015, Dutton was caught on microphone mocking Pacific islanders, whom he joked were probably late to a meeting with him because their homes were flooding due to rising seas.