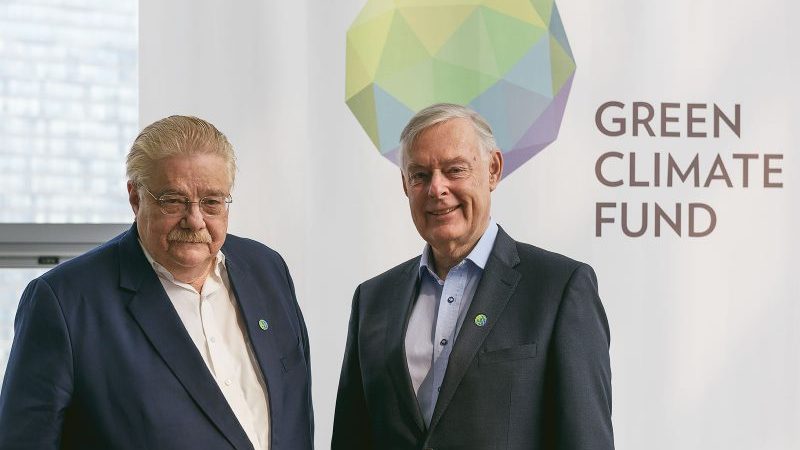 Paul Oquist and Lennart Båge, co-chairs of the Green Climate Fund board, were accused of poor preparation for this week's meeting (Photo: GCF)

Disputes between rich and poor nations at the UN’s flagship climate fund are intensifying as the money runs low.

A meeting of the Green Climate Fund (GCF) board in Songdo started unevenly on Sunday, as co-chair Paul Oquist was detained by political turmoil in Nicaragua, leaving Sweden’s Lennart Båge to run the session single-handed.

With developing countries complaining their priorities were not properly represented, it took nearly two days to agree on the agenda for the meeting.

“I have never served on a board that is this dysfunctional and toxic in my life,” said US representative Geoffrey Okamoto, as the discussion dragged on.

In the context of Donald Trump’s US cutting off contributions to the fund, however, Okamoto’s comment rankled with some.

“It is typical playing to the crowd,” said Zaheer Fakir, who represents South Africa. “The reason why it is dysfunctional and toxic is the way [the co-chairs] prepared for this board meeting.”

He said there had been a “serious lack of consultation” and the chairs had not responded to comments regarding the agenda before the meeting.

The barely veiled hostilities come as the fund faces a cash crunch. It has $2.8 billion left to allocate from its start-up donations. Projects up for consideration on Wednesday would claim $1bn of that.

As well as the US withholding $2bn of its pledge, the pot has lost some $1bn in value due to exchange rate fluctuations since 2014, officials reported.

Discussions on how to top up the budget were rolled over to the final day of the meeting, after lively but inconclusive talks on Tuesday. There were divisions over how much to hinge donations on closing policy gaps, many of which have defied resolution since the fund started.

Trump’s refusal to contribute has driven a wedge between other wealthy countries and the developing world, which still expects governments to fulfil a collective promise to deliver $100bn climate aid a year by 2020, partly through the GCF.

A proposal to ease the tension by allowing philanthropic organisations to chip in was dropped from the agenda for this session. “Most of the donors are trying to deflect away from their own responsibility,” said Fakir.

Other major multilateral funds like the Global Environment Facility are also running low on climate cash and tightening their criteria.

Jasmine Hyman, a consultant with E Co, reported from the meeting by Twitter video replenishment talks were hindered by “a general mistrust in the process”.

Despite the tensions, the board is expected to approve a large volume of projects on Wednesday and start the ball rolling on replenishment.

One area of consensus is the importance of supporting “direct access entities” to channel funds straight to grassroots projects, Hyman said.