India’s power minister says the country can smash its 2022 renewable power goal. Will it happen? 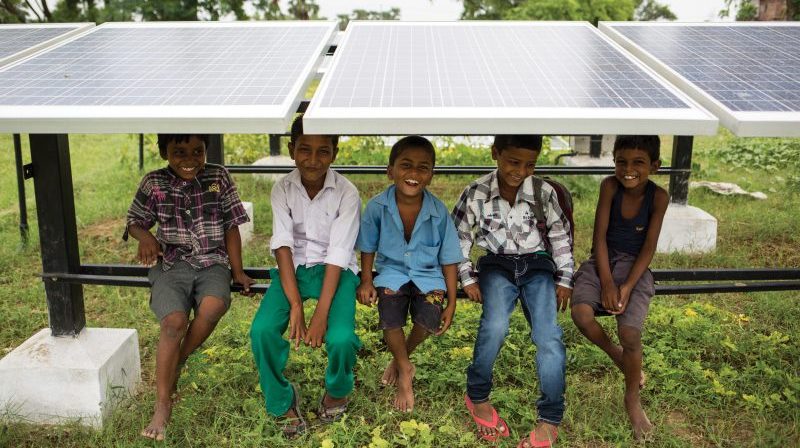 Kids sitting under a solar panel at Dharnai village in India (Pic: Greenpeace)

India’s target to install 175 gigawatts of renewable power capacity by 2022 is widely viewed as ambitious.

But power and renewable energy minister Raj Kumar Singh now says the country will meet the goal well before deadline – and could exceed it by 52GW.

“The last four years have been path-breaking if you compare it to the rate of progress in the previous 48 years,” Singh told a press conference last week, as reported in The Hindu.

Singh said the country would cross the 175GW target “well before 2022”.

At the last official count in March, there was 69GW of solar, wind, biomass, waste-to-energy and small hydro installed – a fifth of total power capacity.

Another 40GW is under tender or construction, ministry officials told the Economic Times. With an extra $50 billion of investment, they estimate 227GW is attainable by 2022.

“We’re planning for more because in case there is a spurt in demand, we should be able to meet the demand. We are doing a scenario planning,” said ministry secretary Anand Kumar.

So is it going to happen? The rate of India’s transition from a coal-heavy power system to clean sources is critical to international efforts to curb climate change.

Working towards creating a clean energy space in the nation, India will reach its target of 175 GW of renewable energy capacity well before the assigned deadline of 2022. pic.twitter.com/JwgVxsDZc4

For starters, it is not clear if the government is adopting 227GW as a new target, as some media have reported. There was no press release to that effect.

Swati D’Souza, analyst at the Energy and Resources Institute (TERI) in Delhi, told Climate Home News it was more likely one of a range of planning scenarios. “If it is a target this seems pretty implausible (truth be told),” she said by email.

PricewaterhouseCoopers consultant Sambitosh Mohapatra, on the other hand, said “it is a new goal for sure”.

Whether the higher number will materialise depends on economic growth, availability of traditional generators and the progress of efforts to expand electricity access.

In April, the government declared it had met its goal to electrify every village. That is defined as a network connection for public buildings and at least 10% of households.

An estimated 30 million rural homes are still off-grid and those who do have power complain blackouts are common. The government’s next target was to electrify every home by March 2019. But Singh said prime minister Narendra Modi had ordered that timeline be shortened to December 2018.

If each villager only runs a lamp and a fan, it has minimal impact on demand, but TVs, fridges and washing machines ramp up the load.

In cities, the government is starting to install charging points for electric vehicles and electrify public fleets, with a view to replacing petrol and diesel engines by 2030.

While it faces hurdles, if and when the e-transport revolution gains momentum, it potentially becomes a big driver of electricity demand, potentially a set back for the transition away from coal.

Another source of uncertainty is the fate of around 40GW of idle coal and gas plants. Whether because of unreliable fuel supplies or failure to secure a power purchase agreement, the developers of these projects have gone bankrupt.

Once they have restructured financially, though, if demand picks up these power stations could be brought online, reducing the need for extra renewables.

“Government has the right policies, the right investment plans, but it all depends on whether the power is required,” said Mohapatra.