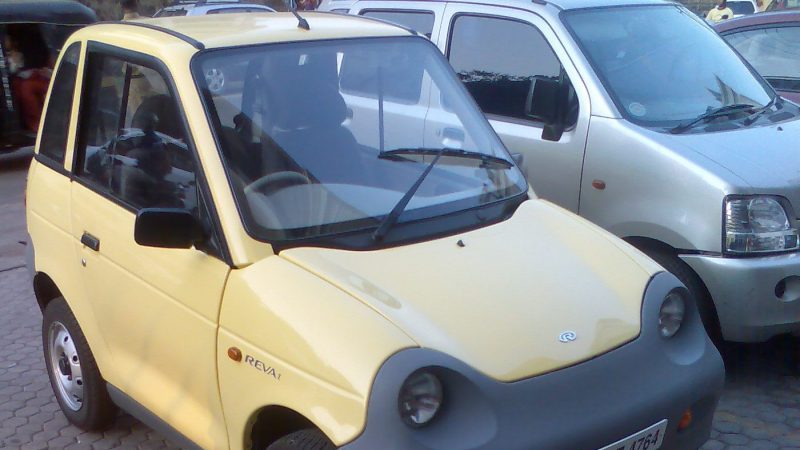 A retired economist and head of the Mumbai Environmental Social Network, which advocates public transport, Datar wanted to practice what he preached.

“On the whole, it was a good experience,” he says. “I must have done about 40,000 kilometres. I changed the lithium batteries, which cost $3,000, twice, which is steep. With the falling prices of solar power, it should be possible to charge these vehicles more cheaply.”

Datar is upbeat about India’s ambitious plan to sell only electric vehicles from 2030, a whole decade before the UK and France. He enthuses about the potential for power-assisted bicycles and auto rickshaws, which are more widely affordable than cars.

But there is a long way to go. Only 1% of all passenger vehicles are electric in a country which is the fifth largest market for such vehicles in the world. That amounts to 400,000 two-wheelers and a few thousand cars, according to the Society of Manufacturers of Electric Vehicles (SMEV) in Delhi.

High prices and a lack of public charging infrastructure are major barriers to a wider rollout. Limited and sporadic government subsidies go only part way to addressing those obstacles.

Lithium batteries, which account for 60% of the cost of a two-wheeler, need replacing every few years and are imported from China, Alok Ray of SMEV tells Climate Home.

Indian state-backed researchers and private companies are starting to invest in domestic innovation and manufacturing. Mahindra Electric, a branch of India’s major automobile manufacturer that bought the Reva from its pioneering founder in 2010, has funded a start-up called Lithium Urban Technologies in Bengaluru. But it is early days yet for producers of electric batteries.

Government backing has come in fits and starts, making investment risky. “The government isn’t clear about its policy to support electric vehicles,” says Ray. “The ministry of new and renewable energy withdrew a R5,500 subsidy [$86] for a two-wheeler in 2012. While there was a market for 100,000 two-wheelers at this reduced price, the next year we only sold 16,000.”

This ministry provided the subsidy through a $15 million Alternate Fuels for Surface Transportation Programme, of which the EV industry was a beneficiary. After its withdrawal, the market crashed and around 1,000 dealers and eight manufacturers shut down their EV businesses. 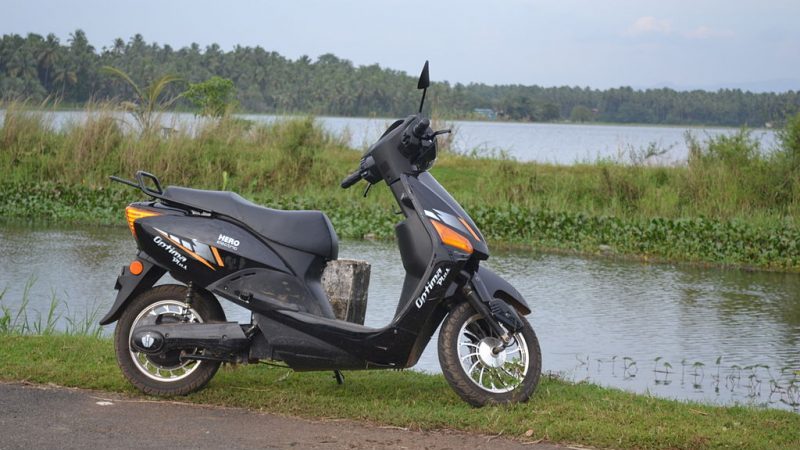 Scooters like Hero Electric’s Optima, with a top speed of 25 km/h, do not require a driving licence, registration or number plate (Pic: Viswaprabha via Wikimedia Commons)

In its 2015-16 budget, the government introduced a new subsidy under FAME – Faster Adoption and Manufacture of Electric (and Hybrid) Vehicles in India, under which manufacturers are reimbursed 15% of the cost of the vehicle.

Small petrol or diesel-fuelled models remain cheaper than the Reva, however. Mahindra Electric produces only 200 electric cars a month.

From 1 July, a 12% goods and services tax will apply to EVs, further hampering the industry’s growth.

It stands in contrast with China, where government subsidies nearly halve the cost of EVs, while there are disincentives for conventional vehicles. It is different, too, to the consumer-driven US market, where Tesla’s cheapest model retails at $35,000 – far beyond the budget of Indian buyers.

And a shortage of charging stations, even in cities, limits the range that EVs can ply. While the exact number is hard to pin down, PlugIn India lists just 222 community charging stations across the entire country. Electricity distribution is largely under public control and Indian laws make it difficult for the private sector to get involved.

These include stimulating demand by ordering 270,000 EVs, including 20,000 buses, and making charging stations free for three years, funded by a cess on oil. It remains to be seen whether these plans will materialise.

In May, a report by state-backed think-tank NITI Aayog and Rocky Mountain Institute in the US called for a 15-year plan to limit registration of conventional vehicles by lottery.

With better urban design, the report says, much of mobility demand can be met by non-motorised transit and public transit, while access to vehicle-charging infrastructure enables higher penetration of electric vehicles.

To address the lack of charging infrastructure, it recommends providing standardised, swappable batteries for two- and three-wheelers (auto rickshaws) on a pay-per-use business model.

Report: Solar has not beaten coal in the race to electrify India

The solutions will depend on private sector innovation as well as government interventions.

This may be taxi or bus companies using their bulk buying power to bring down prices. In Nagpur, Ola – India’s answer to Uber – has launched a fleet of 200 EVs, from e-rickshaws to electric buses, supported by 50 charging points across the city. Maharashtra state is waiving VAT, road tax and registration on EVs to encourage take-up.

Hero MotoCorp, the world’s largest manufacturer of two-wheelers, is investing in start-up Ather Energy, which plans to roll out its first indigenous electric scooter in December, as well as developing EVs internally through its Hero Electric business.

Ather founder Tarun Mehta tells Climate Home the company is in talks with owners of malls, offices, restaurants and grocery stories to install charging stations, and creating a prototype for residential buildings. Initially, Ather proposes to pay the building for the electricity and pass it on to customers for free, to kick-start the model.

The pioneer of India’s EV industry is Chetan Maini, who made the Reva. Maini’s Virya Mobility 5.0 is now joining hands with SUN New Energy Systems to form SUN Mobility to accelerate the mass use of EVs. It plans to deploy a smart network of quick interchange battery stations. “These stations, predominantly powered by renewable energy, will refuel electric vehicles at a cost lower and speed faster than conventional petrol pumps,” say the promoters.

“We have to address the cost of energy, which includes the battery and electricity,” Maini tells Climate Home. “The Indian market is price-sensitive, so we have to create solutions that enable such transformations. The space taken for charging two- and three-wheelers (auto rickshaws) is less than that required for cars, which present a greater challenge.”

It the obstacles can be overcome, EVs – combined with communications technology to make efficient use of them – have enormous potential to save energy and prevent air pollution. The NITI Aayog report claims e-mobility will reduce oil demand in 2030 by 156 million tonnes compared to relying on conventional vehicles, worth around $60 billion at today’s prices.

If India can get ahead of the game, it also represents a substantial export opportunity.

EV pioneer Maini says: “The 15 years of experience taught us that it is very important to go global. We had to deal with different consumers and markets – the global market was in fact bigger than the domestic one.

“We learned product development needs: in 2002, hardly anyone exported anything from India, let alone cars. Our biggest market was the UK, where the government waived the London congestion tax and reduced parking charges.

“In hindsight, it was a mistake to rely on the government’s support. This was a business that should stand on its own feet, with support from the ground.”

New Delhi has been through a fuel transition before, in 2001, when it became the first city in the world to require public vehicles to run on compressed natural gas. The move, intended to reduce air pollution, did not go smoothly, but it happened. When gas was introduced, Maini recalls, it required huge tanks at petrol stations and there were endless queues for taxis and rickshaws to fill their vehicles, as there still are. “With electricity, it is only wires, so it’s easier to manage. It marks a fundamental shift: it will call for business sense as well as environmental sense.”