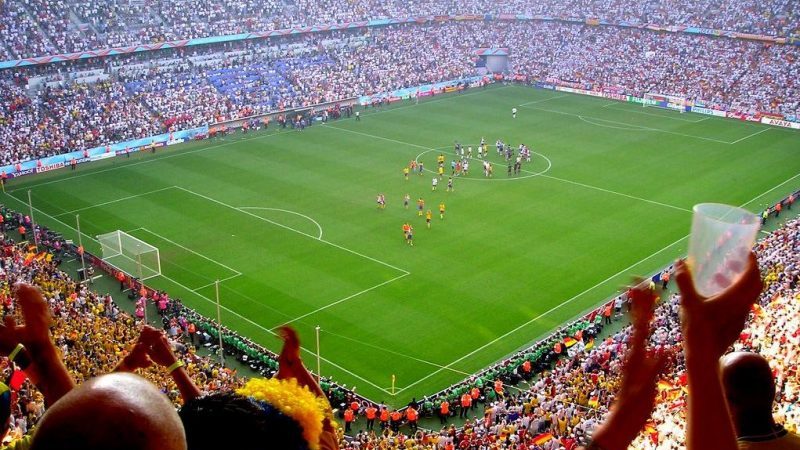 The World Cup attracts big crowds from all over the world (Pic: Flickr/IsakFotografi)

Fifa is encouraging football fans to ‘offset’ the carbon emissions of flying to the World Cup starting this week in Russia.

Football’s global governing body is teaming up with UN Climate Change to offer free carbon offsets to ticket holders, with the chance to win two tickets to the final.

But critics described the initiative as “greenwashing”, saying the offsets come from a flawed scheme and do not cover the full climate impact of the event.

As part of the UN’s Climate Neutral Now scheme, Fifa is aiming to become emissions neutral by 2050, in line with the Paris Agreement.

For each ticket holder signing up to the initiative on its website, Fifa says it will offset 2.9 tonnes of carbon dioxide, the estimated emissions of an average ticket holder travelling to Russia from abroad.

The scheme is capped at 100,000 tonnes of carbon. This means fewer than 34,500 fans will be able to offset their travel tickets, compared with the hundreds of thousands of people expected to attend the event. During the 2014 World Cup in Brazil, more than 3.4 million people attended the games.

Fifa has not yet announced the list of offsetting projects but said they would be “verified low-carbon projects in Russia and abroad”.

Offsetting schemes are complex and controversial. The idea is compensate for generating emissions in one place – here the football tournament – by funding carbon-cutting projects elsewhere.

At the last World Cup, the Brazilian government set up an offsetting scheme to reduce emissions from the event using a voluntary cancellation of carbon credits similar to the UN initiative. It was denounced as “hot air” resulting in “fictitious emissions reductions” in a report led by the Environmental Defense Fund.

The UN offsetting mechanism to which Fifa has signed up has also been marred by controversy.

A 2016 study by the environmental research institute Öko-Institut for the European Commission found “fundamental flaws” in the UN’s offsetting mechanism.

The report suggested that only 7% of potential certified emissions reductions credits had a high likelihood of delivering “real, measurable and additional” emission reductions.

Kelsey Perlman, policy officer at Carbon Market Watch, welcomed Fifa’s acknowledgment of the climate impact of the World Cup but warned that offsetting could be “problematic”.

“If Fifa plans to continue initiatives with offsets surrounded by concerns of fraud and inefficiency, it’s hard to see these efforts as more than greenwashing.”

She added transparency was important and called on Fifa to publish a detailed list of offsetting projects to be scrutinised.

“I would be expecting Fifa to come with some restrictions of what they are not allowing. For instance, ruling out large hydro and coal natural gas and nuclear projects. If there are no caveats on offsetting projects, you immediately need to start asking questions about the environmental impact of this,” she said.

Perlman added that if Fifa was serious about taking action to reduce its emissions it should move away from complex offsetting schemes and directly finance green projects instead.

Report: Green economy now worth as much as fossil fuel sector

According to expert estimates commissioned by Fifa, this year’s World Cup is expected to generate more than 2.1 million tonnes of carbon dioxide – with nearly three quarters of emissions resulting from international flights to Russia and travel between host cities where the games are taking place.

Fifa has also pledged to offset “all unavoidable emissions over which it has operational control,” estimated at 243,000t CO2 or 11.2% of overall emissions.

A spokesman for Fifa told Climate Home News: “Fifa is at the forefront of sports organisations when it comes to environmental protection and offsetting measures.

“Since 2006, there have been projects put in place to measure and mitigate the environmental impact of those events, not only in relation to climate change but also in other areas relevant to sustainability, such as waste management, recycling, and green stadiums.”

At the same time as touting its climate credentials, Fifa is taking World Cup sponsorship from polluting companies including Gazprom, Qatar Airways and Kia Motors.

Jesse Bragg, spokesman for NGO Corporate Accountability, said: “In the case of Fifa, the partnership with the UN Climate Change (which already risks being a greenwashing platform) on one hand and sponsorship from the fossil fuel, airline industries on the other is clear contradiction.”

He added that pledges and voluntary commitments such as Carbon Neutral Now were “highly problematic” and “deliver more for corporate branding than they do for action”.

“First, these pledges are often used as greenwashing platforms. And second, such pledges can often supplant or displace real and enforceable government regulation,” he said.

A UN Climate Change spokesman told DeSmog UK the organisation did not receive anything from Fifa in exchange for the association signing up to its scheme.

He added: “The aim of the Carbon Neutral Now Pledge is to encourage companies and organisations, whatever their current level of emissions, to engage in action against climate change.”

A longer version of this article first appeared on DeSmog UK