The UN’s climate body is holding up World Cup 2014 as a model, but it failed to raise green investment 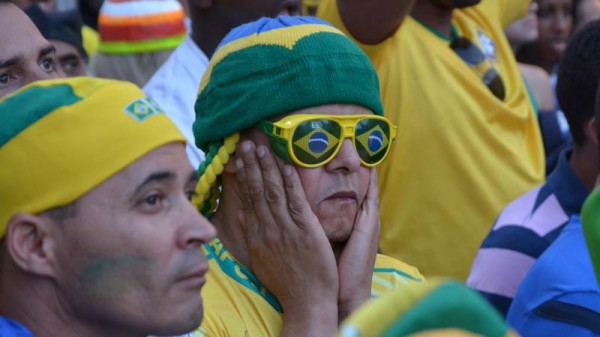 Brazil may have suffered a humiliating defeat on the pitch in this year’s football World Cup, but it won a victory for climate change.

That was the upbeat narrative endorsed by a top UN climate official at Brazil’s London embassy last week.

Halldor Thorgeirsson praised the Brazilian government for its scheme to neutralise the tournament’s carbon emissions – a “win-win” model he said could be used for future sporting events.

But programme director Jose Miguez revealed that scheme actually covered less than one fifth of the total emissions associated with the FIFA World Cup.

And Brazil’s approach failed to raise any investment for low carbon projects or connect with fans.

So as Brazil gears up for the Rio 2016 Olympic Games, what can we learn from its offsetting experiment?

To put Brazil’s initiative in context, you need to understand the chequered history of carbon offsetting.

It springs from the 1997 Kyoto Protocol, the first climate treaty to set legally binding targets to cut emissions.

The targets only applied to developed countries – the ones that signed up, notably excluding the US – and offsetting gave them the flexibility to outsource some of that effort.

Effectively, rich countries pay poorer ones to cut their greenhouse gas emissions, so they don’t have to.

In principle, it could be cheaper to plant trees or build a hydropower dam in India than shift Europe away from its reliance on fossil fuels.

If the carbon accounting is sound – and that turned out to be a big “if” – you get the same result for the climate.

In 2004, the UN launched its clean development mechanism (CDM) to make this happen.

Through this scheme, project developers show they can cut a certain amount of carbon and get credits, known as certified emission reductions (CERs).

These can be bought and sold on the “compliance market”, for countries to meet their Kyoto obligations. (There is also a voluntary carbon market – we will come to that later.)

The market has been dogged with concerns about inefficiency, fraud and “additionality” – the difficulty of showing that emissions cuts are extra to what would have happened anyway.

Leaving aside those issues, it came up against a fundamental economic problem: supply of carbon credits far outstripped demand.

Before the 2008 financial crisis, CERs were trading at €20 a tonne of carbon dioxide – a level that could drive meaningful investment.

The economic crash caused emissions from industrialised countries to fall with no effort at all (albeit a certain level of pain).

The European Union is set to overachieve its 2020 climate goals, while the US has cut its own emissions, limiting the impetus to seek reductions overseas.

In the past few years, climate politics has shifted. Kyoto is all but forgotten as countries look forward to a global deal in Paris next year.

This is set to be a far more inclusive deal, with all parties contributing something to international efforts. Even the US is on board.

As for financing climate-friendly initiatives in poor countries, the developed world has come to see this as an obligation separate from their own emission reduction plans.

Several countries have already pledged money to the UN-backed Green Climate Fund, which is aiming to raise US$10 billion by the end of the year. 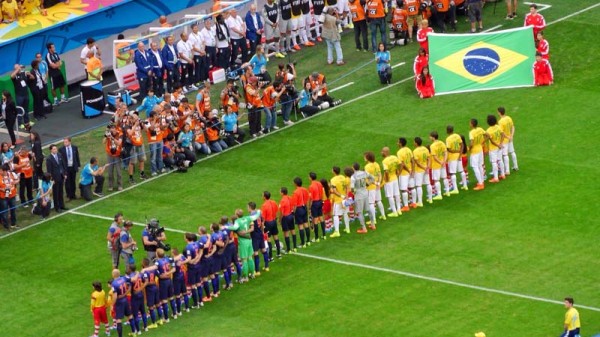 So what has this got to do with the World Cup?

The Brazilian government wanted to offset the emissions associated with building stadiums, hosting delegations and getting everyone around.

Its idea was to invite companies that have been awarded CERs to voluntarily cancel them, instead of selling them.

This would reduce some of the oversupply in the market – and the companies got a shot of good publicity.

Estimates of the tournament’s carbon footprint ranged from 59,000 to 2.9 million tonnes, depending on what was counted.

The higher figure covered all the supply chain and air travel emissions, including cement and steel used to construct the stadiums.

Companies donated 550,000t worth of credits – enough to cover domestic flights and some international flights, but only 19% of the grand total emissions.

Brazilian utility Tractebel Energia was the biggest donor, with 105,000t, followed by chemical company Rhodia on 100,000t, Arcelor Mittal and Gerdau SA on 70,000t each.

These might seem like generous contributions, but the market value of CERs at the time was around €0.50/t.

It was not enough to boost the CER price, which on the contrary has since fallen to bargain basement levels of around €0.10/t.

“I don’t think it had any impact on the market in general,” Thomson Reuters analyst Frank Melum told RTCC.

“The market is very oversupplied. They would need a lot of demand to save the CDM.”

But the UN is sticking by its creation. Thorgeirsson highlighted the US$396 billion of investment in 7,600 projects delivered by the CDM in the last 10 years.

“There is a temporary hiatus in demand,” he admitted. But he held out hope that a global climate deal in Paris next year could reinvigorate the ailing scheme.

“Potential demand is significant when parties are serious about the 2C target,” he said, referring to the politically agreed limit on temperature rise.

Melum does not foresee the price picking up significantly, although he said there could be a “niche market” in linking international sports events with new projects.

A number of business representatives at the Brazilian embassy meeting were keen to promote voluntary alternatives to the CDM.

Unlike the government-led scheme, these can engage fans directly in a conversation about their carbon impact.

Fans had a say in which project to support, opting for a rainforest protection scheme in the Brazilian Amazon.

At the next home game, the Spanish club will present an award to a “super-fan” who has travelled a long way to each match.

The award is for loyalty, but it is also a hook to explain how the club is offsetting those transport emissions.

And the company’s website sells offsets from named projects for €5-10/t, a price which sends a more meaningful signal than the CDM.

Whether through the CDM or the voluntary market, carbon trading has a reputation problem.

Google “carbon credits” and one of the first results to come up is the UK’s Financial Conduct Authority warning it is “most likely a scam”.

The watchdog is commenting on the way carbon credits have been mis-sold to consumers as investments, not the inherent value of offsetting projects.

But it is not a great association to have if you are trying to boost demand for a product.

Sporting events give an opportunity to overcome that barrier, mobilising cash for green projects and raising awareness of climate issues.

In the voluntary cancellation of CERs, the UN is backing an approach that neither raises investment nor connects with ordinary people.

Some would call that a lose-lose.