Trump has damaged the Paris Agreement, say its architects

One year on from Donald Trump’s announcement he would withdraw the US from the UN climate pact, leading figures assess the “dire consequences” 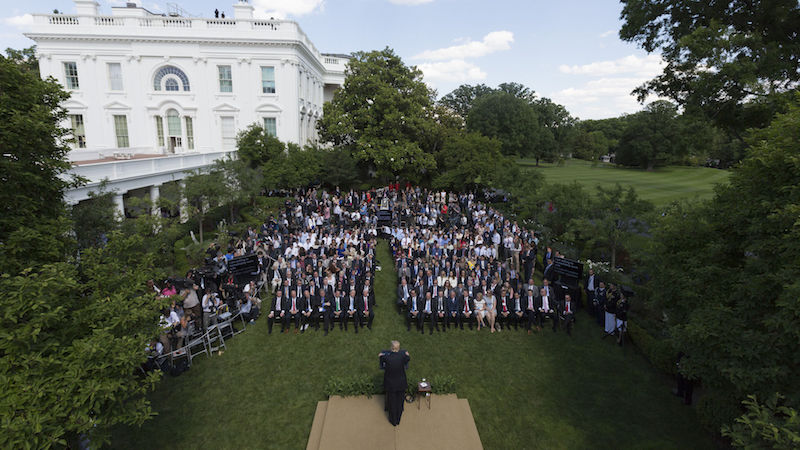 One year on from the Donald Trump speech that broke the international consensus on climate change, architects of the Paris Agreement say the US has harmed attempts to fight global warming.

On the first day of June last year, Trump ended months of speculation by siding with conservative aides who had urged him to remove the US from the Paris deal.

That “reprehensible decision” has had “dire consequences”, Laurent Fabius, the former French prime minister who presided over the Paris talks in 2015, wrote on the Profiles of Paris website this week.

Todd Stern, Barack Obama’s lead climate envoy who forged compromises with China to make a deal possible, said: “It is really damaging for the United States to be on the way out.”

The US position is “undermining” continuing negotiations on the implementation of the Paris deal, Stern told a meeting held by the World Resources Institute (WRI) to mark the anniversary of the Trump announcement – and the reaction has been a “mixed bag”.

Initially, it brought statements of resolve from many countries to uphold the agreement. It also spurred a large coalition of US cities, counties, states and businesses to declare “we are still in”, despite federal policy.

“Eighteen months later, that same decisiveness is very much evident,” said Paula Cabellero, a former climate diplomat and director of WRI’s international climate programme. “Trump can announce what he will, but the reality on the ground, in the US and around the world, is that efforts to tackle climate change continue regardless and unabated.”

Stern said: “It wasn’t a foregone conclusion that other countries stayed in [the deal] and doubled down on their general determination not to walk away.”

But Obama’s climate champion was less sanguine about the broader impact of the US position on the international stage. Stern said he had visited the last two UN climate talks in Bonn, Germany, speaking with dozens of national representatives.

“In the absence of the United States, you have a phenomenon of a fair number of countries, I think, trying to pull back a little bit on some of the things that were agreed to, some of the compromises that were reached in Paris,” he said.

During what Stern described as the “big moment” in Paris, the US had convinced countries to make concessions “maybe past even the point where they were entirely comfortable”.

“So having done that, [for the US to] turn around and say ‘actually never mind, we’re gone – that is a very difficult dynamic,” said Stern.

The Paris deal allowed countries to set their own climate targets. Collectively, the initial national goals would only limit warming to around 3C – falling short of the “well below 2C” goal. The agreement put in place legal mechanisms to compel nations to revisit and increase their ambition.

The rules to govern the Paris deal are still being thrashed out. Countries will meet in Katowice, Poland in December to pin down the details.

“Some of [the ways to raise ambition] are under threat in the ongoing negotiations, quite frankly, because the US is no longer displaying that level of leadership,” said Selwin Hart, who ran the UN secretary general’s climate change team during the Paris talks and is now Barbados’ ambassador to the US. “It is absolutely imperative to have the US at the table. Were it not for the leadership of the Unites States… we would not have had the Paris Agreement.”

Caballero and Hart were also addressing the WRI event.

Over the past year, some of the state department diplomats that worked on the Obama team have remained in post. They maintain a constructive, although diminished, presence at the talks. Under the leadership of Trump’s first secretary of state Rex Tillerson, the climate team was downgraded, but observers have said US diplomats continued many of the positions adopted by the US under Obama.

Now there is new leadership at the state department, with Koch brothers ally Mike Pompeo taking over. Trump’s new national security advisor, John Bolton, is a long-time critic of the Paris deal. The new dynamic in Washington DC will be closely watched.

Laurence Tubiana, a French diplomat who worked with Fabius to broker the Paris deal, told Climate Home News upcoming meetings between Chinese and European ministers would be crucial for damage limitation.

“Now who is teaming up or balancing or discussing with China?” she said. Unless the EU can replicate the US’ diplomatic heft in partnership with China, said Tubiana, “I think we are losing totally the game”.

Many invitees to Trump’s speech in the White House Rose Garden one year ago were from conservative thinktanks. They had lobbied Trump over many months to withdraw from the Paris deal. For some, the anniversary represents a still unfulfilled promise. Under the rules of the deal, Trump cannot leave the agreement until the day after the next US presidential election in 2020.

Competitive Enterprise Institute senior fellow Chris Horner said in a statement Trump should send the agreement to the US senate and recommend they reject it.

“We hope president Trump will consummate the announced withdrawal… by doing what the French, Germans, Italians and others did: send it to the elected body that has the express, constitutional role for approving these types of commitments. Otherwise, all of the administration’s regulatory gains could be for nothing, and American taxpayers will be left on the hook,” said Horner.