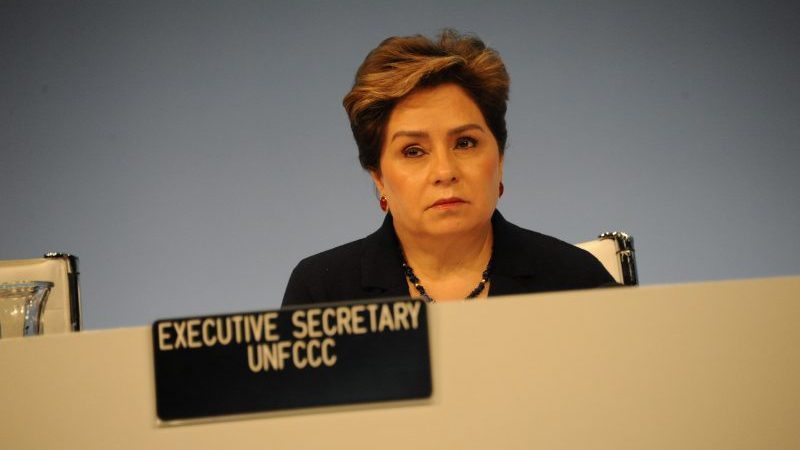 Before delegates arrived in Bonn for interim climate talks, expectations were raised they could produce a ‘negotiating text’ for the rulebook of the Paris Agreement.

That text would form the basis for talks in December in Poland.

One week ago, this was seen as optimistic but plausible. “It was unlikely, but it could have been done,” said one negotiator.

With three days of talks to go, such an outcome is now impossible, UN climate chief Patricia Espinosa said on Monday afternoon.

“A single negotiating text. No,” she told a meeting of journalists in Bonn. “That would really not be possible. It will all come together when it comes to the level of the Cop, of the conference in December.”

Espinosa would not be drawn on whether this meant the meeting had failed to reach her expectations. She said progress had been steady and there had been “evolution” in the positions and a strong commitment remained to the final goal of agreeing a rulebook this year.

“I have not heard anyone saying ‘well maybe we won’t finalise this’,” said Espinosa. “There were some rumours before the session started that some people would not probably be so eager to finalise, but at this session everything I have heard, and I have met with all of the negotiating groups, all of them. All I have heard is everybody is committed. So that is very encouraging to me.”

Climate talks revolve around ‘texts’, into which parties add their own lines, before fighting about which parts get to stay in.

The failure to produce such a document at this meeting meant it was “highly likely” a further meeting slated for Bangkok in September would be needed, said Camilla Born from E3G.

Between now and then, officials will attempt to cobble together all of the competing views on dozens of contested issues and build a single text. That would allow time for countries to engage in inevitable, initial fights before the all-important end of year meeting.

Li Shuo, from Greenpeace East Asia, said the meeting in Bonn had struggled with how fast to push different aspects of the talks. If one group of countries sees progress on part of the talks, while their pet issue is dragging, they tend to dig their heels in across the board. This was creating a drag across the board and a headache for the officials who will need to compile the text.

The reviews are in for Sunday’s talanoa and they are pretty positive. NGO participants enthused about how the unfamiliar format allowed negotiators to set aside their habitual battles and listen.

Next job is to figure out how to convert these good vibes into action. Vulnerable countries want to see governments commit to more ambitious national plans by 2020, but plenty of big emitters are resistant.

The Democratic Republic of Congo complained to the conference on Monday two of its delegates had been refused visas to attend this fortnight’s meeting by the German government.

Outside the plenary, head of delegation Tosi Mpanu Mpanu told CHN two government experts – one of whom covers Redd+, which the DRC is leading talks on – were told they could not apply for visas by the German embassy in Kinshasa. Their names were apparently left off an initial list of 20 names handed to the German government.

“Other delegations have many more than 20 delegates,” said Mpanu Mpanu. “It’s a complete lack of respect. Is it a colonial approach? This is not right. My capacities are reduced; it should be a level playing field.”

The German government press office has been contacted for a response. In the plenary, Mpanu Mpanu sought assurances from Poland all DRC delegates would be admitted to the next summit.

Who’s in for a Winnebago?

The Polish government laid out its plans for the Katowice climate talks in December. Many parties raised the issue of accomodation in the small town. China, in particular, complained their delegation had been placed in a hotel 45km from the conference centre. In Beijing, the delegate said, it would take more than 2 hours to travel such a distance.

Poland’s organising committee reassured the conference that it was their goal to keep travel times below one hour. They will be “encouraging” Katowice residents to billet conference attendees.

Efforts to get big oil barred from climate talks have stalled, in the face of resistance from countries like the US and Saudi Arabia.

A draft decision Saturday on meeting logistics made no reference to conflicts of interest, despite that topic having taken up most of the discussion last week. The contact group has its final meeting of this session on Tuesday.