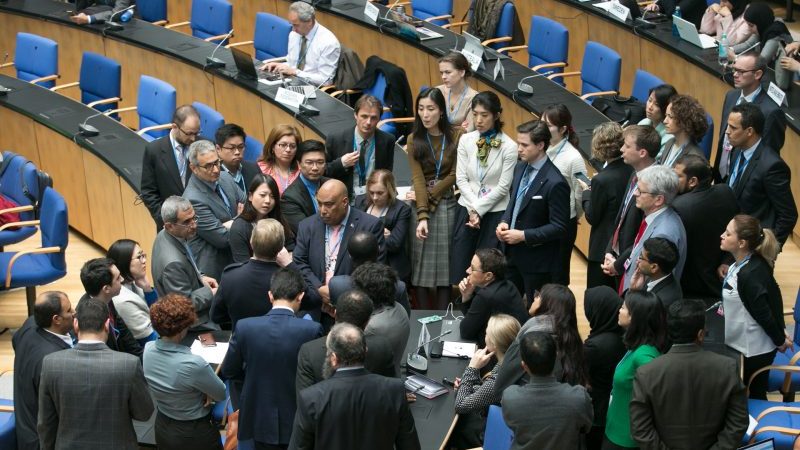 Delegates huddle to resolve a disagreement at UN climate talks in Bonn, November 2017 (Photo by IISD/ENB | Kiara Worth)

When we began publishing stories of sexual harassment at UN climate talks earlier this month, I did not know how people would react.

After Farhana Yamin and Meera Ghani broke the silence on this issue, I wondered if more women would come forward. Would they be willing to open up about moments of vulnerability? Would they dare point the finger at powerful perpetrators?

The answer was: yes and no. More people told Climate Home News about bad experiences in the formal negotiations and civil society. Their stories illuminate the fear, anger and humiliation engendered by sexual harassment – and the barriers to speaking out.

The following examples were shared on condition of anonymity and have not been independently verified.

One 34-year-old related an incident from this month’s climate summit in Bonn. A much older man she met in a professional capacity talked at her, sat too close and insisted on accompanying her to her next meeting – which she had invented as a polite excuse to get rid of him.

By her own assessment “nothing really happened”, but she felt “trapped”. She asked Climate Home News not to publish the full account in case the perpetrator recognised himself in it. “I shouldn’t even have written this,” she wrote.

Then there was a twentysomething researcher furious at a prominent scientist who stared at her chest and addressed her as “pretty young lady”. She felt unable to call out his unprofessionalism because he was an essential contact for her thesis.

I was a member of a small delegation in intercessional negotiations a couple of years ago. I was relatively new to the negotiations, and eager to achieve a good outcome. The chair of a powerful negotiation bloc was very friendly with me, but I did not think much of it. One evening the negotiations went into the late evening, and this particular person walked up to me at the end of a session to propose that we discuss draft text proposals on a key issue on behalf of the group, saying he was keen to get my input. I agreed, and he proposed that we move to his hotel room so that we could have something to eat. I said I wasn’t hungry but nonetheless joined to his hotel room, already feeling slightly uncomfortable. He ordered food and proposed that we would sit on the bed. I said I’d rather sit on a chair. He didn’t seem interested in discussing text proposals and started asking personal questions. I said I had to leave and stood up. As I walked up to the door, he approached me and put his hand on my lower back. I managed to leave the room, feeling extremely uncomfortable.

Another incident happened about two years ago. A senior member of another delegation caught me by surprise by kissing me on my mouth at the metro station, after we had walked up to the metro station together. I was horrified but left without saying anything about it.

It is clear the personal accounts of Yamin and Ghani struck a chord. They were among Climate Home News’ ten most read articles during the Bonn summit. When I raised the subject at an informal side event, a young woman in the second row of the audience nodded along intently, her eyes watering.

Yamin’s intervention got an immediate reaction from the institution that runs the talks. Patricia Espinosa and Nazhat Shameem Khan, two of the top diplomats in the process, declared on day one that there must be zero tolerance of harassment. Both have smashed glass ceilings in their own careers and their comments seemed heartfelt.

One outcome of the conference was a gender action plan to boost the participation of women at all levels of climate action. That was already in the making before this round of negotiations began.

But measures to safeguard women from harassment at the heart of the UN process are in their infancy. That is where Yamin and Ghani hope to drive real and lasting change.

As UN climate chief Espinosa acknowledged, “it takes a lot of courage” for people to formally complain. “I hope by strengthening the capacity to deal with that… we can look in the future to a situation where everybody is comfortable coming forward,” she said.

The hastily drawn-up “zero tolerance” policy advised delegates to report incidents to security staff. Anecdotally, they are part of the problem. Youth delegates say they routinely face unwelcome flirtatious comments while going through the airport-style checks at the entrance to each venue.

Discouragingly, UN Climate Change would not disclose the number of sexual harassment and abuse cases it had handled internally, insisting this was “confidential” information. That is a shame. Transparency builds confidence. For people to feel comfortable reporting inappropriate behaviour, they need to see evidence such complaints are taken seriously.

Similarly, Climate Action Network introduced a safety package for its annual party. But after Climate Home News reported on it, the organiser admitted they had only been able to find two safety officers for the jam-packed event – advising partygoers to first contact the venue’s security with any complaints.

There were murmurs of cultural resistance, too. The tenor of the objections was that there were more important issues at stake. And sexual harassment is everywhere: why single out UN climate talks for scrutiny?

It is true decisions made at the talks affect millions of lives and livelihoods around the world, whereas only a few thousand people are exposed to abuses of power within the process. But if the negotiating environment is hostile to young women, particularly from the global south, how can they effectively represent the interests of those most vulnerable to climate change?

Many who experience harassment or assault prioritise the cause over their own safety and dignity. Some smart and passionate people, like Ghani, reach breaking point and quit the movement. That is the movement’s loss.

Climate talks may not be uniquely sexist, but there are risk factors for abuse: stark power imbalances and a culture of confidentiality. Publicly, participants champion gender equality and inclusion. In their private behaviour, a minority undermine those principles.

The true test of any “zero tolerance” policy comes when a powerful player is accused of wrongdoing. Our reporting to date indicates there are influential people with questions to answer about their conduct. But holding them to account depends on their accusers airing painful memories and facing potential repercussions for their own careers: no easy ask.