Bonn morning brief: ‘Dramatic as far as the UNFCCC goes’ 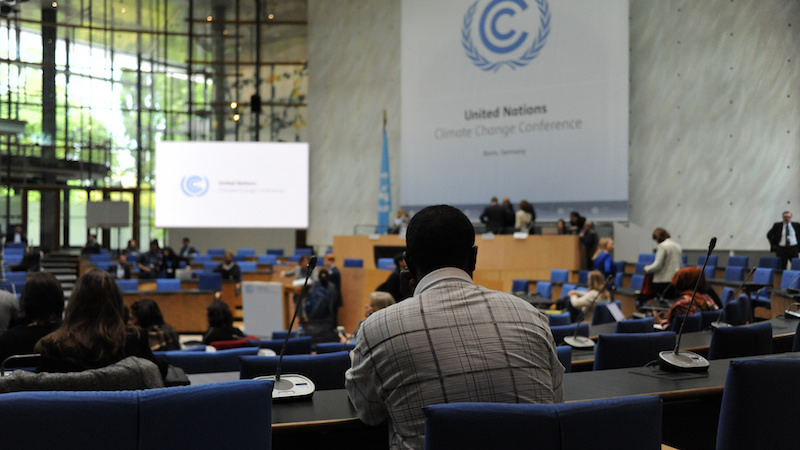 Hump day in Bonn and more than a few people had the hump.

Despite broadly positive noises coming from negotiators and observers about steady progress, the CHN team has also heard the rumblings of discontent.

Are you signed up for our newsletter? Get our Bonn morning briefs before anyone else here.

My way or the autobahn

A meeting between donor countries and the developing world (led by Africa) over the predictability of climate finance contributions ended in friction on Wednesday afternoon. According to a source in the room, African diplomat Seyni Nafo, who has been co-facilitating with Australian Peter Horne, took the microphone and said that he would be running discussions alone in the coming days, then abruptly walked out.

“Dramatic as far as the UNFCCC goes,” said our source. We asked Nafo about it, but he did not respond to our emails.

What got his temper up was an attempt by rich countries to block the Africa group from submitting a draft decision to be considered by the meeting. The proposal would create a register of intended contributions, to be updated every two years. (Rich countries will hate this, and many will say it’s impossible as it doesn’t fit with their budget cycles.)

Eventually, after China and some smaller Latin American countries, spoke in support of the Africans, the secretariat posted the draft on its website.

There are five meetings scheduled through the fortnight on this issue, which the Africans have made a condition of any support for rich country positions on other negotiating streams. This was the second, and it did not go well.

In June last year, Poland’s then-environment minister Jan Szyszko was planting trees with UN climate chief Patricia Espinosa to celebrate the announcement of Katowice as the host of the 2018 Cop24.

But following international outrage over his handling of logging in the world heritage Białowieża Forest, he has been dumped from his job and this week it was announced by Poland that a junior energy minister, Michał Kurtyka, would wield the gavel over their Cop.

COP19 president and fmr environment minister of Poland: “Minister Szyszko walks along the UN corridors and claims that he is the one who runs the COP in Katowice. He owns it, or what?” This tweet was deleted. What’s this all about? Read more here: https://t.co/ATcSjh3Vjw pic.twitter.com/Jh0qIksi9E

In what can only be interpreted as sour grapes, Szyszko refused to budge, claiming UNFCCC rules meant Poland didn’t have the right to displace him.

Asked by CHN’s Megan Darby whether Syzszko’s claim had legitimacy, Espinosa poured ice cold water on her tree-planting pal. It’s (probably) an undignified end to a long, influential and ultimately divisive career. And an embarrassing start for a very important diplomatic role for Poland.

Can’t manage what you can’t measure

Talks on the costs incurred by poor countries due to climate change – a fraught topic known as ‘loss and damage’ – kicked off on Wednesday.

Both St Lucia and the Cook Islands complained about the absence of hard data to inform their claims for assistance from the countries that have caused climate change. St Lucia’s representative said the response needed to consider the ability of the country to predict the level of risk they face.

Simon Young, from insurers African Risk Capacity, opened the risk assessment roundtable of the so-called Suva Expert Dialogue by highlighting the need to “understand what is happening before we can design the actions to manage risk”.

Will the Talanoa Dialogue, launched on Wednesday, result in increased climate pledges? Absolutely, say the EU and vulnerable nations. Not a chance, say a coalition of emerging economies. Megan Darby reports on the disagreement.

“We live in constant fear that a direct hit from intensifying cyclones could wipe out our economy altogether and set back our development by decades,” said Inia Seruitaru, Fiji’s official climate champion. “This is not the way our children and our children’s children should live.”

While some aspects of the talks are reportedly going along positively, a source in the discussions on Article 6 of the Paris Agreement – which calls for the creation of carbon markets – are in poor shape.

“There basically has been no substantial discussion on anything yet… This is probably the worst that I’ve seen it,” said the source.

The EU Commision announced its 2021-2027 budget proposal on Wednesday, calling for 25% of its €1.279 trillion to be related to climate protection. That’s up from 20% in the current cycle.

This is good, said E3G’s Jonathan Gaventa, but “the remaining 75% of spending must also be brought in line with EU climate goals. Continuing to fund fossil fuels will present a huge liability to the European taxpayer.”