The Talanoa Dialogue could be a springboard to stronger action on climate change, or just another talking shop. Here are the discussions to watch 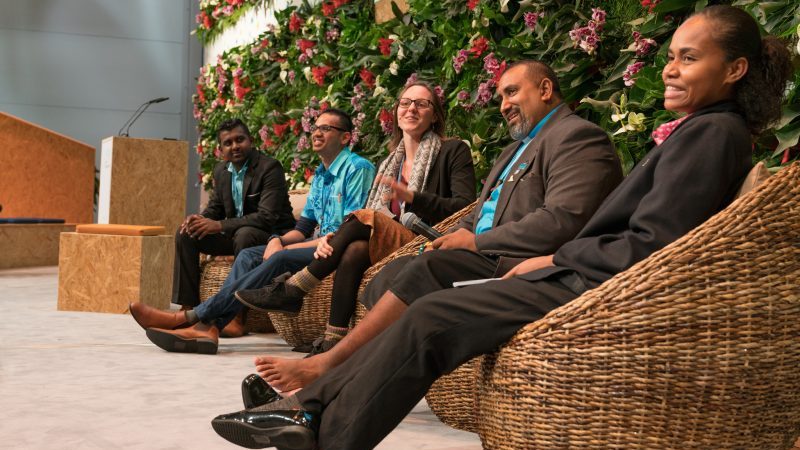 The 'Talanoa Space' at the 2017 UN climate summit encouraged people to share their stories (Photo: Flickr/UNclimatechange)

Three years after the Paris Agreement was adopted, it faces a major test: the first stocktake of collective action.

Dubbed the Talanoa Dialogue and drawing on Pacific storytelling traditions, this could be – as the Fijian organisers hope – a springboard for raising ambition. Or it could be a talking shop.

In the next two weeks in Bonn, national negotiators will meet assorted academics, campaigners and lobbyists in parallel sessions to exchange ideas. They have been asked to answer three questions – the third being the hardest and most important: Where are we? Where do we want to go? How do we get there?

More than 400 submissions have been made, which give a flavour of the discussions to come. Come the COP24 climate summit in Katowice this December, these will bubble up to the political level.

Here are 11 of the key themes.

It may be academic, given emissions trends put us on course for 3-4C of warming, to note that there is still some ambiguity around the Paris Agreement temperature target.

Small island states cleave to the tougher 1.5C limit – essential, they say, to their survival. China, meanwhile, mentions only the 2C goal, noting development priorities such as energy access, food security and poverty eradication “could not be overridden” by climate targets.

The EU walks a line between them, reciting verbatim the Paris compromise to hold temperature rise “well below 2C” and “pursue efforts” to 1.5C. In a nod to vulnerable allies, the bloc refers repeatedly to the upcoming Intergovernmental Panel on Climate Change special report on 1.5C.

While Fiji has stressed the process is to be “non-confrontational”, with an emphasis on solutions, there is no getting away from the politics of burden-sharing.

It is particularly blatant in Saudi Arabia’s input on behalf of the Arab Group, which adds its own question: why are we here? Their answer, of course, is the historic emissions of industrialised economies, with no mention of the oil exporting countries profiting from their energy use. Despite being ranked as high income by the World Bank, Saudi Arabia harks back to its 1990s classification as a developing country.

The Paris Agreement blurred the rich-poor divide, but did not erase it. China too emphasises the principle of “common but differentiated responsibility” – citing research by UK-headquartered NGO Oxfam to argue developed countries need to deliver more climate finance.

Financial support is a key theme for the Africa Group, in particular for adapting to the impacts of climate change and redressing damages.

That should include a “significant increase” in money from public sources and “not simply offload finance to [the] private sector,” they urged – plus access to clean technology and expertise.

“We need to go to a world where developed countries stop making promises but live up to their promises,” the submission said.

The Paris Agreement is a long-term plan, but deadlines are looming already for commitments developed countries made in earlier rounds of talks.

Emerging economies and the poorest nations are united in holding rich nations’ feet to the fire on pre-2020 action. That applies to a collective promise of $100 billion a year of climate finance as well as national emissions reduction targets.

As Maldives environment minister Thoriq Ibrahim writes for Climate Home News: “It would be a profound tragedy if we get to 2020 only to discover we waited too long to do what was needed.”

The US government has not made a submission. Maybe they forgot? An alliance of Caribbean countries helpfully posted the latest US national climate assessment on their behalf.

It shows that whatever the White House position, American government scientists firmly support the international consensus that climate change is real and caused by greenhouse gas emissions.

Despite president Donald Trump’s threat to withdraw from the Paris Agreement, the US is technically still in the deal and accountable for its promises.

One of the most targeted country-led submissions comes from Switzerland, Costa Rica, Finland, New Zealand and Sweden, making the case for scrapping fossil fuel subsidies. An easy win in theory, but reform has been held up in practice by special interests.

Once the preserve of keep-it-in-the-ground activists, this approach is gaining currency and should become a routine part of national climate plans, the SEI suggests.

How can we feed a growing population on a warming planet, while cutting the food sector’s greenhouse gas emissions? There is no easy technology fix, which puts lifestyle choices in the frame.

The meat-rich diets of industrialised countries have a hefty carbon footprint. A kilo of beef generates 16-30 times the carbon dioxide of a kilo of tofu.

ProVeg International calls for policies to encourage a shift towards eating grains, pulses and vegetables instead. If the world went vegan, they claim it could slash food-based emissions 70% by 2050.

The Buddhist Tzu Chi Foundation reaches a similar conclusion on vegetarian eating, based on faith rather than statistics from UN reports.

“The insatiable greed of humanity is seriously damaging our precious Mother Earth,” it says. “The well-being of the world should be everyone’s responsibility… We can start by disciplining ourselves, by reining in our unnecessary desires, and by encouraging everyone to protect the earth as much as we can from further damage.”

Quakers add education of girls and family planning to the mix, an oblique reference to the strain population growth puts on efforts to secure the climate.

Others take a more pragmatic attitude: you can pollute as long as you pay for it.

The International Emissions Trading Association (Ieta) highlights the provision in the Paris Agreement for cross-border emissions trading, saying this can allow countries to meet their obligations more “cost-effectively” and raise ambition in the long run.

Today though, “polluting is too cheap”, says Carbon Market Watch, calling for a more inclusive discussion on how to price carbon.

Several submissions look at how to speed up development and adoption of low carbon technology.

The International Renewable Energy Agency estimates $1.7 trillion of investment is needed between 2015 and 2030 to meet countries’ renewable energy targets.

Models for holding temperature rise below 2C or 1.5C rely heavily on removing carbon dioxide out from the air, on top of cutting emissions.

Some of this can be done with old-fashioned tree-planting, but many scenarios assume large-scale use of unproven technologies.

The European Academies Science Advisory Council warns against excessive optimism, outlining some of the risks associated with negative emissions options.

Twenty eight years since the first IPCC report – this a sad indictment of our collective failure to give a damn for anything other than our own short-term self interest. Are these scenarios really the pinnacle of our climate change community’s ingenuity & analysis? https://t.co/uzvuCtVpEc