‘We have brought swallows into Milan’, says father of the vertical forest

Stefano Boeri dreamed up the idea of a living building from a childhood story, now he is exporting them around the world 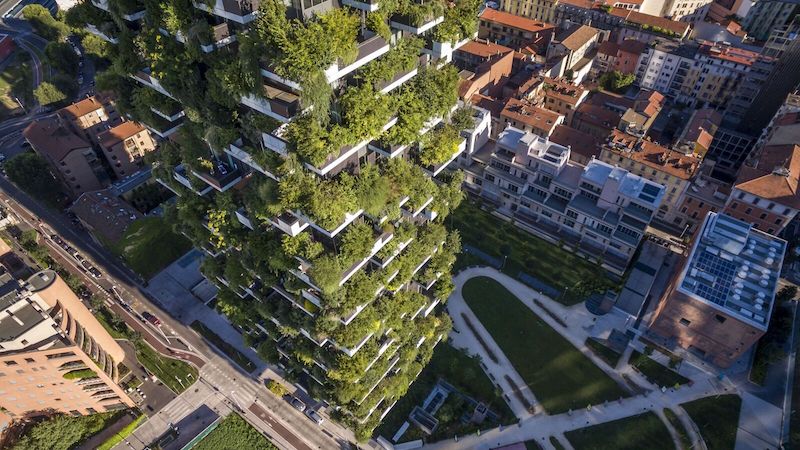 21,000 plants grow on the outside of the two buildings in a new business district in Milan (Photo: Stefano Boeri Architetti)

Close to the railway station of Porta Garibaldi in Milan stand two buildings that, for a while, were unique in the world.

It has been said that they can be seen as “a house for trees inhabited by people”. The exterior facades feature a total of 21,000 plants, including 800 full size trees.

Recently appointed as president of the Milan Triennale art and design museum, professor Stefano Boeri, is the architect who invented and managed the construction of the “vertical forest”. which was first realised in the 26 and 18-floor skyscrapers in the new business centre of Milan.

CHN: Professor Boeri, how did you come up with the idea of lining skyscrapers with trees?

SB: The idea came from afar; perhaps I first envisioned it when, at the age of 13, I read “The Baron in the Trees” by Italo Calvino: the story of a young nobleman who, by choice, decides to move into a tree and there spend his entire life. Since then, obviously, there were a lot of other hints, but what impressed me most, has been the in-depth study on how big cities in the world rapidly expand, with terrible implications on our environment.

Can you give us some numbers?

Megalopolises grow at impressive speed. To give you an example, Beijing, with its suburbs, has now reached 103 million inhabitants. Cities occupy only 2% of our planet’s land mass but account for 75% of the production of carbon dioxide pollution, the main cause of climate change.

Do you see a way for combating this phenomenon?

Plants are the best defence against these polluting factors. They ingest carbon dioxide through the process of photosynthesis and absorb thin powders and pollutants. Starting from these considerations, I came up with the idea of planting an arboretum in the centre of a large and populated city. My two vertical forest buildings occupy 1,500sq m of ground and host 21,000 plants. If the same number of living trees were to be planted on a flat surface, it would take an area of at least 30,000sq m.

Was this idea immediately well accepted?

Not really. At the beginning, we had to fight against scepticism, mistrust and suspicion, as always happens when you propose new and never before tested ideas.

How did you overcome all objections?

With a coordinated effort by specialists from a variety of scientific disciplines, ranging from botany to sociology, and from environmental protection to design. We studied everything up to the most minute detail, and came up with many original and innovative solutions for the problems we had to face.

For example, in order to identify the most suitable plantings of full size trees capable of withstanding windy days, we went to Florida, a state with a lot of knowledge about hurricanes, There, we conducted tests in their wind tunnels to identify those varieties be placed on the upper floors. Normally you do not have many windy days in Milan but, when they do happen it may create a problem. To our surprise, we discovered that plants with large leaves and extended branches were most fit to resist the wind.

Now, how do you assess this experience?

Now the picture is quite clear and the experiment has been very successful: 800 high trees are in place since 2012 and we have not lost a single one. Only two trees had to be replaced, but it was due to the fact that they had suffered during transportation. The tenants of the two vertical forest buildings have lived happily in this unique environment since 2014. We also discovered that the presence of the plants reduces the effect of dizziness caused by living high up off the ground.

To get it all done we imagine that you had to devise many new and never before tested technological solutions.

Yes, we had to make difficult decisions and impose solutions that, at the beginning, were not appreciated by everyone. As an example, all the plants on the walls of the buildings are considered as a common condominium service and, as such, are managed as a whole. They have been entrusted to Laura Gatti’s team of specialists who had to develop new and peculiar skills, in relation to the special care that they must devote to the vertical forest; we call them “the flying gardeners”.

Four times a year they come in with a seasonal cycle that consists of two external treatments and two internal ones. By doing this, we are able to guarantee professional uniformity in treatments and, last but not least, a drastic reduction of maintenance costs, with respect to what the individual tenants would have to pay if they had to attend to the plants on their own.

Did everything go as planned or have you had some sort of surprise?

We continue to discover new things. For one, we had the clear demonstration of the intelligence of plants as our trees grow and come very close to the ceiling of the overlying terraces, but never touch them. Also, we found that they widen up to get closer to the neighbouring plants without ever overlapping. In essence, they seem to manage the assigned space with great rationality.

Another surprise: for fighting ticks on the plants without using pesticides, we decided to bring in 9,000 ladybirds from Germany. Shortly thereafter, the ticks had disappeared, but the richly fed ladybirds had multiplied. It did not last long, as the birds rapidly exterminated them. As a result, swallows, now very rare in Milan, have nested on our buildings. The vertical forest has become a new and varied ecosystem.

What impact has the vertical forest had in Italy and in the world?

We have not patented anything, and all the adopted solutions have been published; there are no secrets and we are pleased to see that architecture inspired by the same criteria is developing in other parts of the world, from Japan to China to South America to the north of Europe.

Obviously, since we were the first and the ones who accumulated the more in-depth experience in the field, we are constantly called upon to cooperate and to design new green architectural structures. We work a lot in China, and I am very proud of one of our projects to be built in Eindhoven in the Netherlands, where a new complex designed as a vertical forest will be destined to “social housing” for young couples on very low incomes. Interestingly enough, the final cost of these structures, including the green, does not exceed €1,300 per square meter.

In Italy, unfortunately, there is still little attention being paid to urban green areas. Thus we lose incredible opportunities for the development of new jobs and for the managed improvement of the environment. Few people know that in recent years, our wooded areas are expanding in total surface area in spite of forest fires and frequent neglect.

When shall we see the first Vertical Forests in the United States?

This article was first published in Italian in America Oggi.