Shipping climate talks begin amid protests and concerns over influence 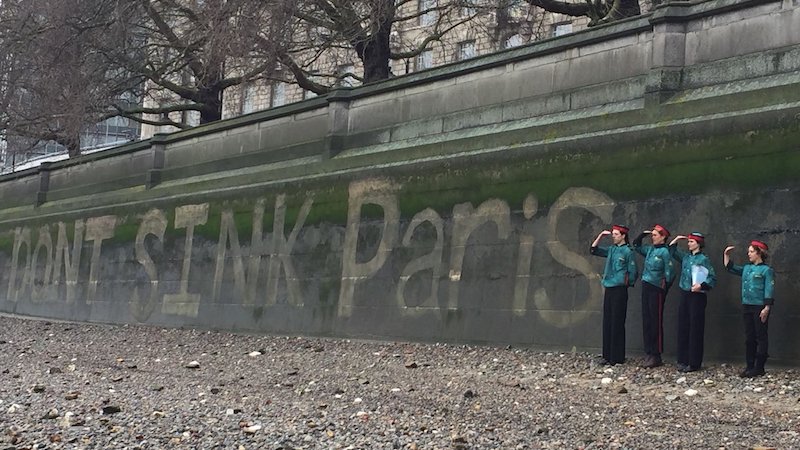 Activists stage a protest on the shores of the Thames River, near IMO headquarters in London (Photo: IMO Climate)

The UN shipping regulator has been stacked with industry representatives, undermining efforts to tackle the sector’s carbon footprint.

So warned Transparency International on Tuesday, as talks on a climate target for international shipping started in London.

The anti-corruption watchdog raised “serious concerns” about potential conflicts of interest at the International Maritime Organization (IMO), in preliminary findings of a study.

Half the world’s ships are registered in just five states – Panama, Liberia, the Marshall Islands, Malta and the Bahamas – which compete to impose the lowest taxes and regulatory costs. They provide 43.5% of the IMO’s funding and have “exaggerated weight” in policymaking, the study found.

Among the other 168 IMO member states, many allow representatives of private shipowners, shipbuilders or commodity companies to speak for them in working groups.

“The industry is quite heavily involved in national delegations and it is not very transparent,” said Brice Böhmer, coordinator of the watchdog’s climate governance integrity programme. “Some countries have extra weight… these are very often tax havens or secretive jurisdictions.”

Comment: Will the IMO deliver the climate deal of 2018?

Next week, the IMO is due to agree an initial climate strategy, more than two decades after it was first asked to regulate greenhouse gas emissions under the Kyoto Protocol.

“It is clear that progress has been very slow and is probably due to this [industry] influence,” Böhmer told Climate Home News. “The IMO needs to speed up the process.”

Journalists may report on the outcome of talks but not who said what. This is “very surprising for a UN body,” said Böhmer, adding that shielding national delegates from public scrutiny is “not acceptable”.

Campaigners who wish to play a formal role in the process, meanwhile, must promise to “be fully in harmony with the spirit, functions and principles of the IMO”. That may inhibit their freedom to make robust arguments on the issues, the watchdog said. At the latest meetings of the IMO’s five key committees, trade associations outnumbered civil society groups by almost five to one.

The IMO declined to comment on the TI report.

Activists held a rare demonstration outside the IMO headquarters on Tuesday morning, urging countries to agree carbon cuts in line with the Paris Agreement. “IMO don’t sink Paris” was written in large letters on the embankment of the River Thames facing the building.

Drawn from the Campaign against Climate Change and the Green Party, a dozen people waved placards saying “no more dirty secrets” and “100% by 2050”, referring to the emissions reduction target they want to see. People dressed in matching costumes gave delegates “boarding cards to a ship of the future”.

Matt Mellen, one of the organisers, told Climate Home News he had been shocked to learn the size of shipping’s carbon footprint. The international sector accounts for around 3% of global emissions, a figure that could rise to 17% by 2050 if it is left unregulated.

“No-one I know had any idea of the scale of pollution from shipping,” Mellen said. “It really feels like it is a dirty secret and now is the time to shine a light on it.”