Crackdown on coal mine ‘self-bonds’ stalls under Trump

Regulators have almost wiped out risky practice since 2015-16 wave of bankruptcies, but some coal companies still insure themselves 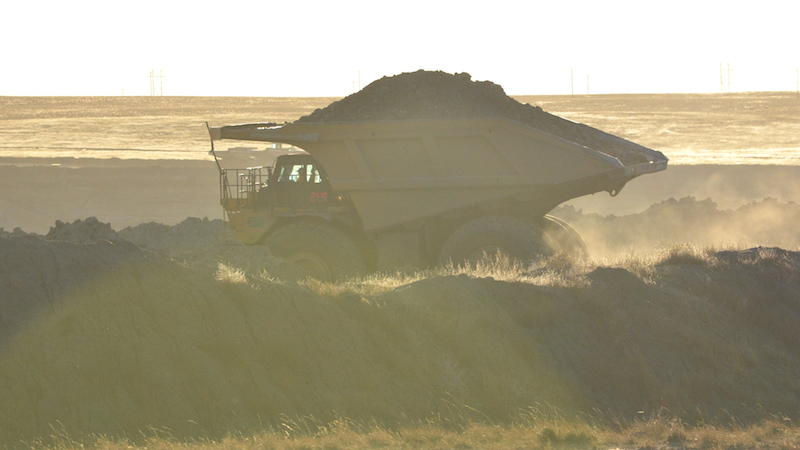 A truck hauls coal near Wright, Wyoming, in the Powder River Basin, the coal deposit expected to be the US' most enduring

Obama-era efforts to stamp out the practice of US coal mining companies insuring their own clean-up costs have been widely successful, a Climate Home News investigation has found.

But those wins are threatened by regulatory rollbacks under president Donald Trump.

Data compiled nationally for the first time as part of CHN’s Reclaiming Coal project, shows the amount coal companies hold in these “self-bonds” has fallen 75% since mid-2016.

For decades, US coal companies deemed financially healthy were allowed to provide their own guarantees that they could cover the costs of returning mined land to its natural state. This assurance was based on the value of the business, meaning it could disappear if the company went bankrupt and forfeited its permits.

In 2015 and 2016, a rash of bankruptcies hit the US coal industry, claiming companies that accounted for nearly half the country’s production. Although the companies avoided forfeiting their permits and have since emerged from bankruptcy, state and federal regulators were served a major wake-up call.

“Self-bonds were considered riskier after the downturn of the coal industry. A company puts up its own assets in a self-bond to cover reclamation costs. Should the company default, those assets may no longer be available to pay for reclamation leaving a possible environmental hazard,” Tarah Kesterson, the Virginia Department of Mines, Minerals and Energy’s spokesperson, said in a statement. This could leave taxpayers with the financial burden of clean-up. 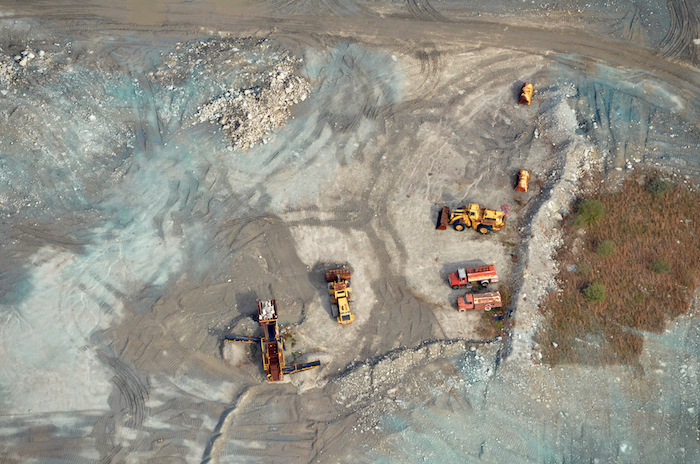 Trucks sit idle on the Hobet 21 mountaintop removal coal mine, one of the largest surface mines in West Virginia when it was producing (Photo: Olalde/SouthWings)

At the time of the 2015-16 crash, about $3.86 billion around the industry was held in self-bonds. Over $2.4bn of this was held by companies in bankruptcy.

The Office of Surface Mining Reclamation and Enforcement (OSMRE), at that time under the Obama Administration, issued an advisory warning against the use of self-bonds.

Upon moving out of bankruptcy, companies including the US’ largest coal producer Peabody converted their self-bonds, mainly to guarantees backed by insurance firms.

Data compiled by CHN (published here) shows the value of self-bonds nationwide that are held by the mining company has now fallen to about $214 million in four states – West Virginia, Wyoming, Virginia and Alaska. Half of these – $105m-worth – are due to be converted to other types of bonds, meaning the self-bonding threat has almost totally receded.

Another $731m is in less-risky forms of self-bonds that are backed by utility companies.

But some companies, including Peabody, have left the door open to self-bonding in the future, and attempts to outlaw the practice have hit a roadblock since Trump’s inauguration.

Peabody CEO Glenn Kellow said in 2017: “Peabody believes it continues to qualify for self-bonding and will consider adding self-bonding to its capital structure to support its coal mine reclamation requirements in the future, should circumstances warrant.” 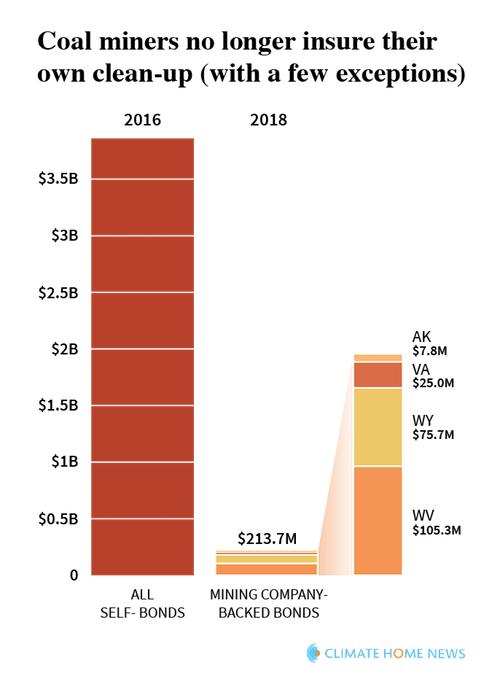 In October, the Trump administration rolled back the Obama-era advisory on self-bonds, claiming it would “impose a significant burden on America’s coal industry”. At the time of Donald Trump’s inauguration, OSMRE had been working on regulations to change or even outlaw self-bonding, but that has stalled while the agency awaits a new director.

“You want bonds for catastrophic events, failures in the system, bankruptcies, somebody walking away. Self-bonding just leaves much of the control with the people who could be going anyway,” he said.

“When you had three very big mining companies that were largely self-bonded go under the table, that freaked a lot of people out. I’m not going to lie,” said Travis Deti, executive director of the Wyoming Mining Association.

Companies have since changed how they “look at their bottom line to ensure they have the funds to meet their obligations to the state,” he added.

The National Mining Association has previously argued OSMRE lacked the jurisdiction to regulate self-bonds because the states were the ones to approve or deny the bonds.

Which companies still use self-bonding?

While CHN’s analysis discovered an overall trend away from this form of bonding, it also exposed which companies and states continue the practice.

West Virginia accounts for half of the nation’s remaining unbacked self-bonds, with about $105m worth outstanding. All those belonged to subsidiaries of Alpha Natural Resources, which announced in October that it would transfer about 250 of its mining permits to Lexington Coal Company. More than $95m of those self-bonds are included in the transfer, while the rest remained with companies linked to Alpha. The press release at the time said that the move would totally eliminate self-bonds in the state, although it was unclear to what type of bonding mechanism the liability will be converted.

In an email, Alpha spokesperson Steve Hawkins said the company has already replaced its portion of the self-bonds in West Virginia, although he did not say when this happened. Phone numbers listed to Lexington were not in service.

The state’s environmental agency has said it will not accept new self-bonds, but there are no plans to write that statement into law, according to a department spokesperson. In a move reminiscent of his ally Trump’s pronouncement of regulatory rollbacks, governor Jim Justice – a coal company owner who himself uses self-bonds (see below) – signed a moratorium on rule-making in January.

Only one permit without ties to a utility company still self-bonds in Wyoming, and it accounts for about $75m in liability at the huge Buckskin Mine.

Kiewit Corporation, the construction and mining company whose subsidiary owns the mine, did not respond to a request for comment.

On Monday, Wyoming regulators proposed amendments that would further restrict the cases in which mining companies could use self-bonds to guarantee their reclamation liability. 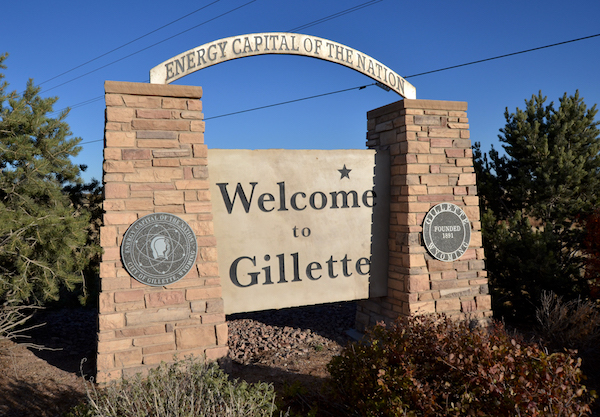 The Buckskin mine is 10 miles north of Gillette, WY

Only one mining company – Usibelli Coal Mine – produces coal in Alaska, and 56% of the company’s $13.8m of reclamation guarantees are held as self-bonds. Alaska has the lowest level of bonding dollars per acre of any coal-producing state, making its bonding situation all the more precarious.

Company representatives did not respond to requests for comment.

Russell Kirkham, coal programme manager of Alaska’s Division of Mining, Land and Water, said state regulators keep a close eye on Usibelli’s production and reclamation and that the operator presents a low risk because specific power stations create reliable demand for its coal.

Kirkham also argued that self-bonds could be used because they are cheaper for companies. “Surety bonds [which are held by third parties] get very expensive, but they’re still risky. Self-bonds, they’re risky in terms of collecting them, but they’re not as costly so you can get more investments tied up in reclamation,” he said.

Likewise in Virginia, only one coal mining company uses self-bonds – A&G Coal Corporation, which OSMRE records show is owned by West Virginia governor Justice. The state has been lifted up as a success story due to disallowing any future self-bonds in mid-2014. But A&G still holds about $25m in self-bonds, which accounts for 10% of all bonds held in the state.

Virginia state regulators have no plans to force A&G to convert its bonds, according to mining department spokesperson Kesterson, and OSMRE is still yet to approve the state’s self-bonding rule change, nearly four years after it was put forward.

In addition to these remaining instances of self-bonds backed only by the mining company, about $731m in self-bonds are backed by utility companies. While these utilities are much more resistant to the travails of the coal sector, these bonds would be exposed if the utilities themselves fail.