Ahead of a key meeting at the International Maritime Organisation in April, Brazil is leading objections to setting tough climate targets for the sector 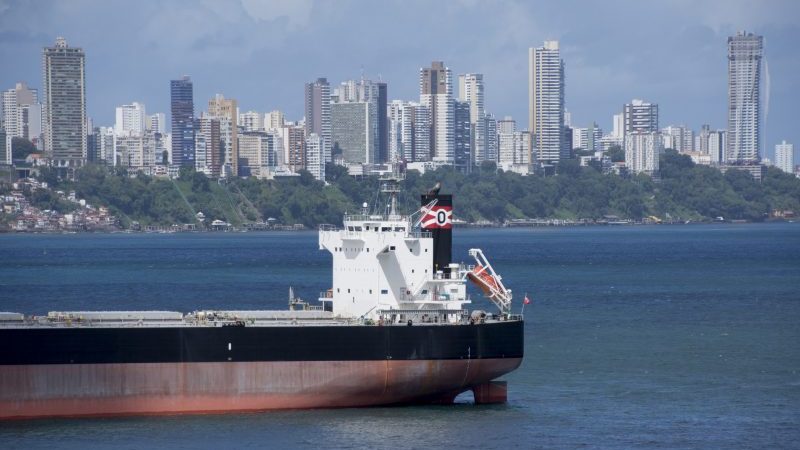 Brazil is seeking to water down prospective climate targets for the shipping sector, documents seen by Climate Home News show.

A joint submission to the International Maritime Organisation (IMO) from Brazil, India, Argentina and Saudi Arabia scratches out large parts of a draft global agreement due to be finalised next month.

The group deleted sections proposing to cap greenhouse gas emissions from shipping at 2008 levels and reduce them “significantly” by 2050, arguing only relative measures of carbon intensity should be used. An overarching vision to achieve a zero carbon sector by 2075 was replaced with the vaguer “no later than in the second half of this century”.

It added that no policy measures “are expected to be implemented” before 2023, ignoring suggestions for action that could be taken sooner, such as speed restrictions.

Sources involved in the talks say Brazil has been the most outspoken blocker of ambition in meetings.

The strategy should “give a signal to the private sector that the transition is inevitable,” he said. But “the trade in food and food security should not be threatened in any way by whatever measures the IMO agrees.”

Changes proposed by Argentina, Brazil, India and Saudi Arabia to the draft climate vision for shipping, in their submission to the IMO

Sources said that during informal meetings, delegates at the IMO have explored ways to address Brazil’s concerns while setting a vision compatible with the goals of the Paris climate agreement. That could mean offering targeted exemptions, rebates or assurances on costs.

Outwardly, Brazil’s stance is being challenged both at home and abroad.

In a comment article first published in Brazilian business paper Valor Econômico and translated into English for CHN, researchers from the Institute for Climate and Society warned Brazil had become a laggard on this issue.

Ana Toni and Natalie Unterstell noted that mining and logistics giant Vale had no fewer than five advisers on Brazil’s delegation to the IMO last year.

“Under this influence, the purpose of the delegation has been to avoid any cost increase to companies based here, be they freight operators or contractors,” they wrote. “This may be what is best for Vale, but not for the Brazilian economy as a whole.”

With experience in producing biofuels, Brazil had a market opportunity to supply greener fuels to the shipping industry, they said.

Internationally, a coalition of European and Pacific island countries is leading the charge for higher ambition.

The Marshall Islands – a small island state with the world’s second largest flag registry – Kiribati, Solomon Islands and Tuvalu have been joined by New Zealand in proposing the most aggressive timeline for slashing emissions: full decarbonisation by 2050.

A broader group of nearly 40 countries has signed up to the Tony de Brum Declaration, named after a Marshall Islands statesman, which is less specific but emphasises the urgency of action.

These include South American states Chile, Peru and Colombia, which face some of the same challenges as Brazil and have previously aligned with its IMO positions.

David Paul, environment minister for the Marshall Islands, said shipping must play its part in meeting the goals of the Paris Agreement.

“It is clear to everyone that before specific measures to reduce emissions are adopted, any disproportionate negative impacts will have to be identified and addressed,” he said.

“So there is simply no excuse for countries to stand in the way of an ambitious outcome from the IMO in April. Those of us that are truly committed to climate won’t accept anything less.”