A gold mine swallowed their village. This Amazon tribe is here to take it back

In 1996, Osvaldo Wuaru and his family arrived on the outskirts of the vast Munduruku Amazon Territory with a crucial mission: set up a village to hold back the invasion of pariwat (non-indigenous) gold miners. Twenty-one years later, it has all but failed.

Named Watch Post (the Portuguese acronym is PV), the village has been swallowed by the heavy equipment of hundreds of illegal gold miners (called garimpeiros). What was once a few huts hidden in the Amazon forest now resembles a bombed battlefield.

In January, this reporter was the only non-indigenous member of a warrior party sent to PV Village to reclaim it from the miners. The expedition navigated the entire 226km length of the Tropas River.

For the Munduruku, the Tropas is now a dead river, muddy and toxic with mercury. Around PV Village, the waters are lined by strips of barren land, fallen trees, huge holes dug by excavators, scattered huts and unpaved roads used by motorcycles, tractors and quadbikes.

“Game used to be very easy here – pig, deer, tapir. But it is all gone due to the machines and pollution. Now, only one stream still has fish, but they are all sick from mercury”, said 70-year-old Chief Osvaldo, in a conversation inside his hut, which remains in the village. “This damage will remain forever.” 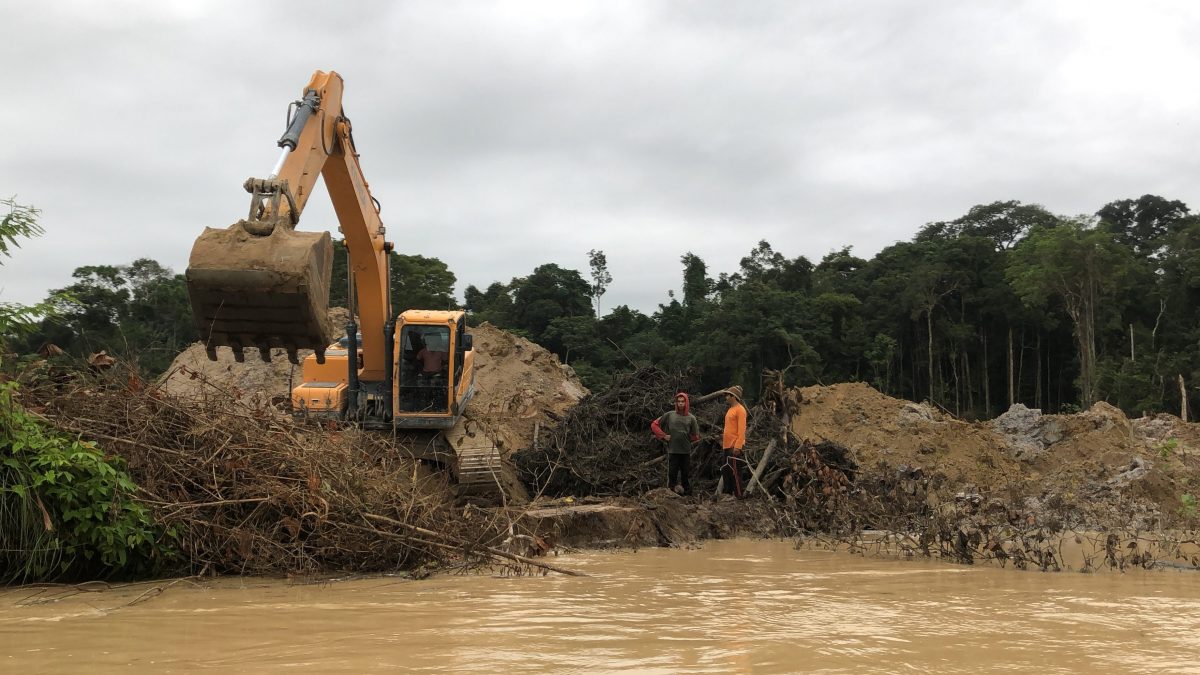 There is even an airstrip, where single-engined aeroplanes make around 10 flights a day to Creporizão town, 25 minutes away. The air bridge transports fuel, food, liquor, illegal drugs, mechanical parts, mercury, sex workers, merchants – and a lot of gold.

Despite the industrial scale, the whole process is illegal. According to Brazilian law, mining in indigenous lands is a federal crime. In practice, though, large swaths of the Amazon, including federal protected areas, have increasingly become stateless zones dominated by gold, land-grabbers and criminal timber rings.

The direct impact of mining on Brazil’s out-of-control deforestation is small in comparison to clearing for pasture, but it is not negligible and is increasing. Between 2016 and 2017, the number of illegal mines discovered in the forest by the official radar monitoring system rose from 382 to 949.

The Tapajós basin, one of Brazil’s largest gold reserves, is now a hotspot for deforestation. Federal police and environmental agents are outnumbered and hampered by budget restraints.

Whole cities’ economies now depend on illegal, environmentally-damaging activities, capturing local politics and gaining social acceptance. Itaituba, a city of 98,000 people, elected a former gold miner as mayor. It even has a “gold street”, where the metal is sold openly despite its illegal origin.

The result is a breakdown between federal and local enforcement. When illegal garimpeiros burned two government environmental offices to the ground in Humaitá, state governor Amazonino Mendes sided with the miners.

In indigenous lands, the void left by the state is even more dramatic. In the 23,820 square kilometre Munduruku indigenous territory, which is the size of Belize, Brazil’s federal indigenous bureau Funai maintains only one employee.

With no allies, the Munduruku have decided to take matters into their own hands. On 17 January this year, they published a manifesto that said PV Village “no longer exists” and announced a warrior expedition to “arrest and expel all pariwat from our land” and “destroy all mining machinery”. This followed a decision taken during the people’s general assembly, last year.

A few days later, a six-boat party of bow-and-arrow armed warriors, leaders such as the Munduruku chief Arnaldo Kaba and several children left for PV Village. Authorised by the leadership, Climate Home News joined the group. Funai’s representative refused to go, citing a lack of security.

As the boats moved upstream, the water changed from light brown to the colour of thick mud. The expedition passed many Munduruku villages. Locals reported they had stopped fishing and drinking from the river about four years ago. 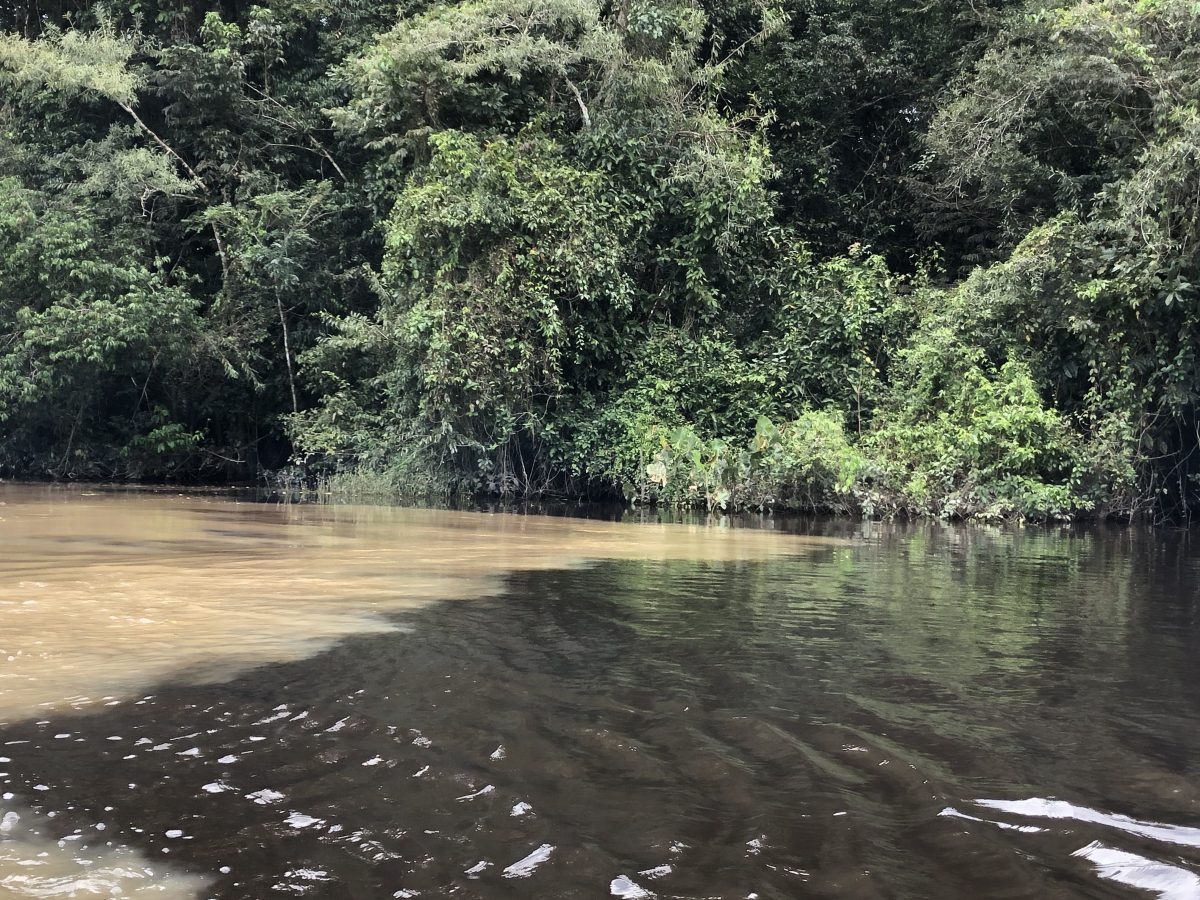 At the tributary of the Caburuá, clear dark water feeds into the brown Tropas, a shocking contrast. Biyom Saw, a 29-year-old Munduruku female warrior who travelled with her baby son, blamed the pariwat for the contaminated water. “We can’t fish, and the children are hungry. If we bathe in the river, rashes appear.”

The final hours of the journey to PV Village run along a river that is thick, lifeless and brown. All around, the forest is cleared to give the garimpeiros access to the soil and gold beneath. Some of the craters are several meters deep, and the old ones fill with muddy, poisoned water.

Along the river, garimpeiros work with excavators, stand outside huts or drive around. “It looks like a city,” said Ana Poxo, one of the expedition leaders, whose village is a two-day boat trip away.

At PV Village, about 60 gold miners live alongside 15 remaining Munduruku families. They have turned the one-room public school into a dormitory. Many more live in shanties scattered through the forest. Chief Osvaldo said that after a few previous attempts to enter the Munduruku indigenous territory, the garimpeiros struck deals with some local leaders. Soon, dozens of pariwat arrived and took control of the territory.

Now, in this once remote corner of the Amazon, there are food stores, a brothel and liquor joints. One of them, Osvaldo explained, is run by his eldest son, who also allows the miners to explore for gold.

Osvaldo expressed disapproval of his son’s choices. “My son forced his 8-year-son to drink. The child got drunk. He should apologise to everybody for this,” he said.

With the arrival of the expedition party, the Munduruku warriors tried to reestablish authority over the village. Some 40 of them went to the small businesses, inspected them in search of drugs and alcohol and ordered them to close. At a meeting in the village centre, the Munduruku’s chief Kaba demanded the miners leave.

“The Tropas river is dead”, he told dozens of garimpeiros. “I didn’t see even a butterfly crossing it.” The garimpeiros took his people’s gold and contaminated their water with mercury, he says. “You have to go. It’s not me who is expelling you, it’s our people. I don’t order anything, it’s the people.”

The task, however, is complex. Exploiting divisions among the Munduruku, the garimpeiros claimed they were there with the permission of local leaders. With their traditional food resources depleted, PV Village now depends on aeroplanes to bring food. During the meeting, garimpeiros tried to use this leverage to make compromises, promising all sorts of gifts, from fish tanks to gold.

“Sometimes we go to Creporizão [a nearby town] and spend 15, 20 grams of gold on rum and prostitution. I say this based on my own experience. And we don’t have the guts to give Chief Osvaldo 5 grams, 10 grams?” said Barbudo  – ‘Beardy’ – a garimpeiro, to the meeting.

Several Munduruku work in the mine as cheap labor. A few have even become bosses and sided with the pariwat. One of them, Waldelirio Manhuary, now lives in a brick house in the city. He is one of the few to defend the non-indigenous presence, saying the pollution was an acceptable side-effect of the mining business.

“The federal government wants us to remain in the jungle, only hunting and fishing. It doesn’t want us to bring machines and to do the way they do it, like growing soybeans. We are poor and rich, because we are siting on a very big wealth,” he said.

Requests for comment from Funai about the Munduruku remain unanswered. So far, no government agency has tried to shut down the PV gold mining operation or tested the water in the Tropas River.

According to information gathered by the Munduruku leadership, mining resumed right after the warriors’ two-day visit. Arnaldo Kaba said that, if they don’t go, there will be a new expedition, now only with warriors. “Then all the other villages will come,” said the leader of the 14,000-strong ethnic group. “This is the warning we left.” 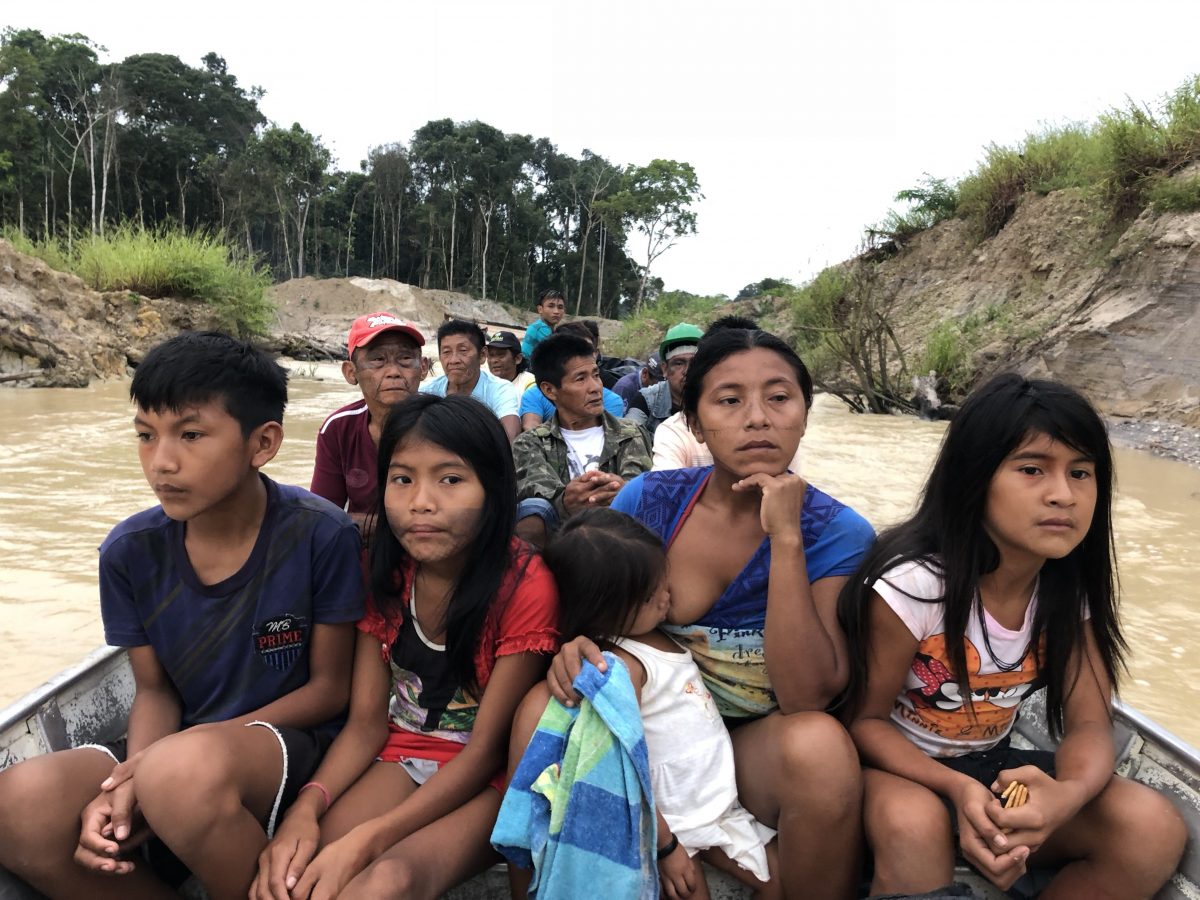 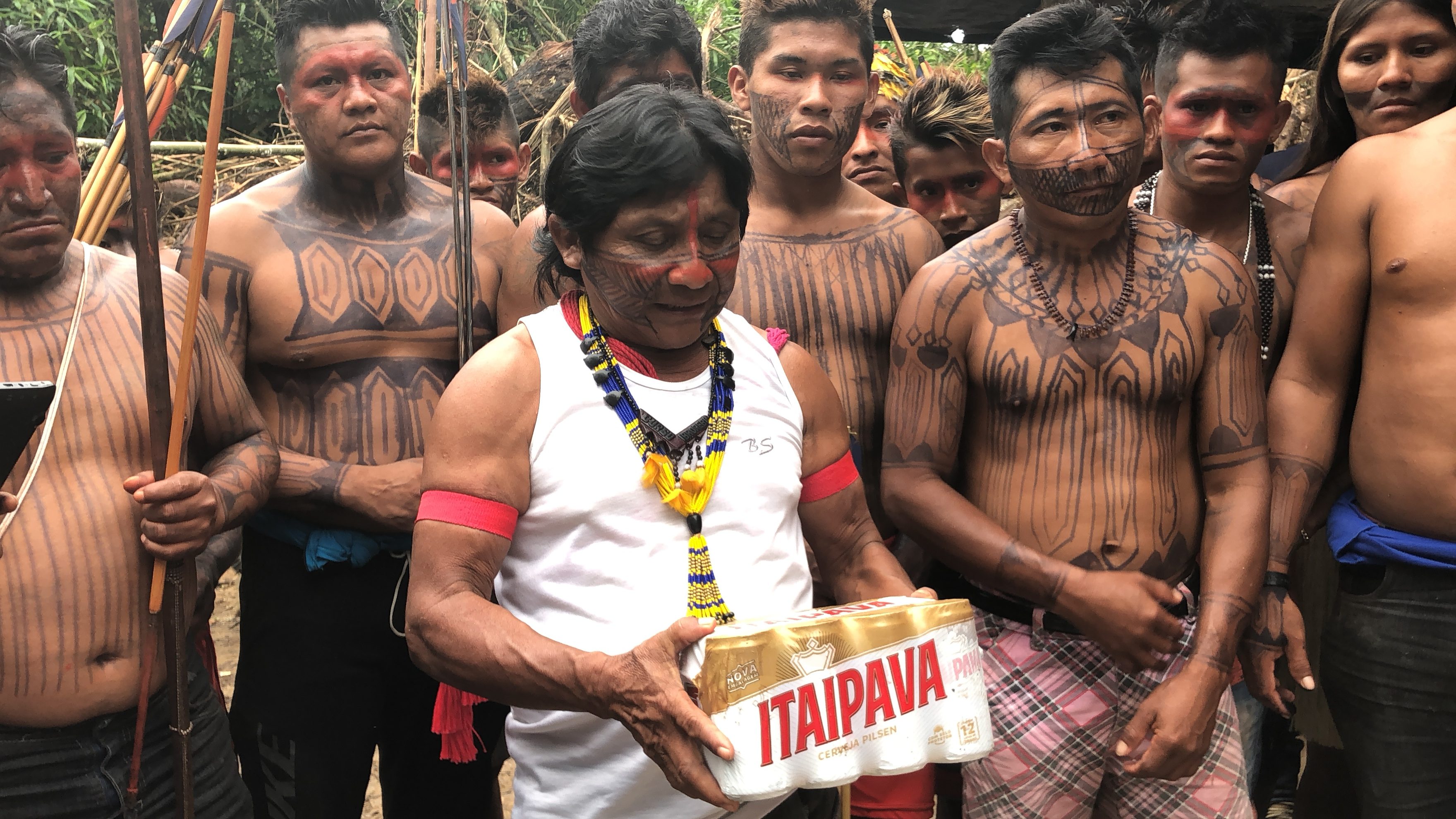 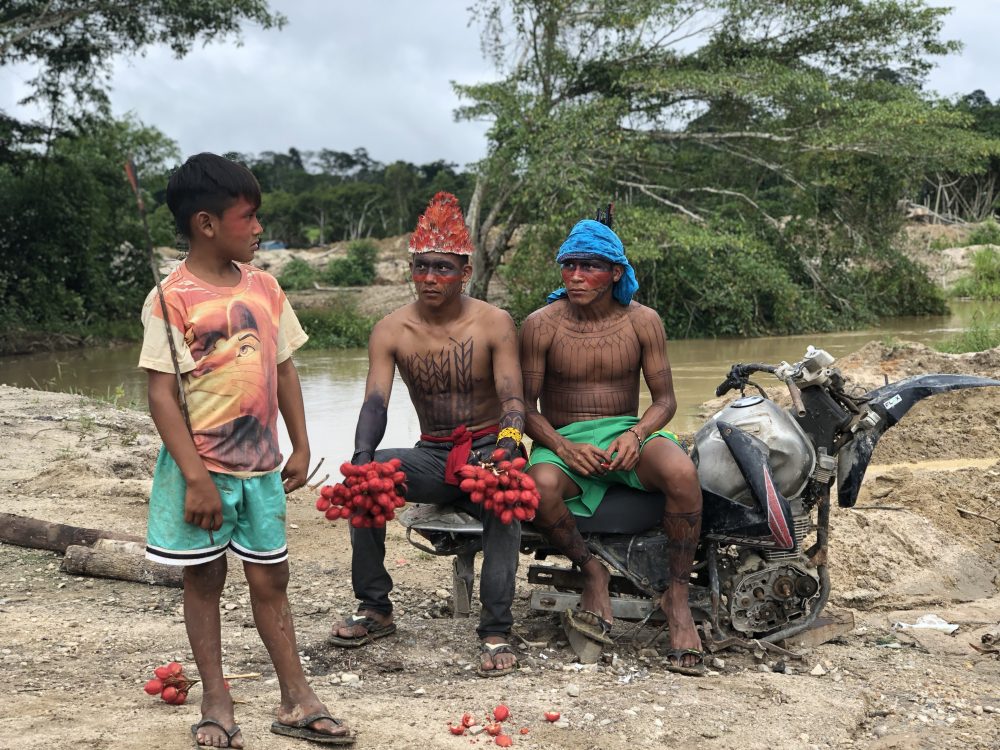 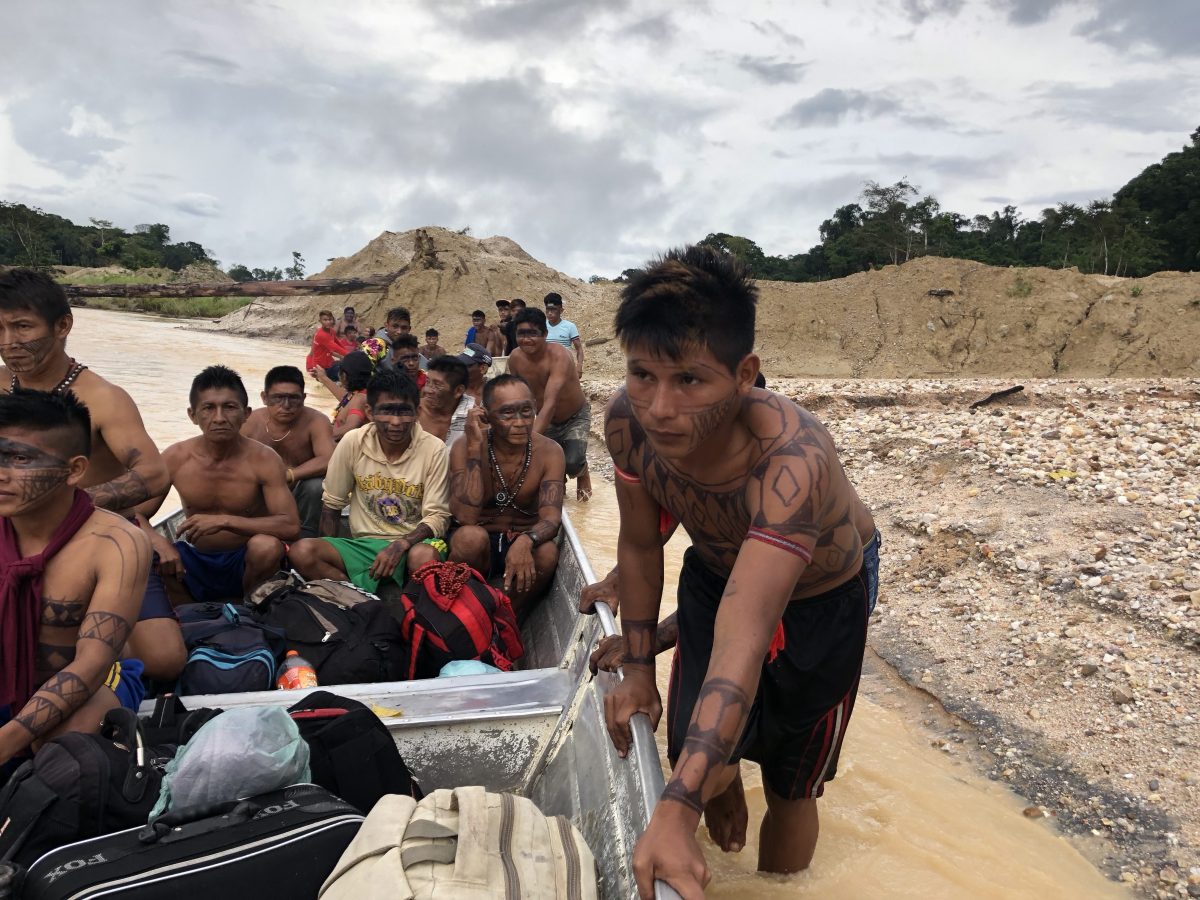