Draft law worries civil society groups, who say they are already being excluded from the international climate process 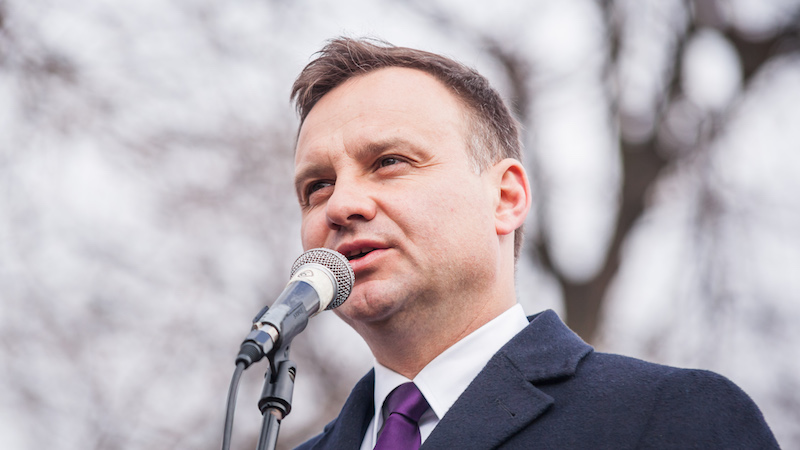 Polish president Andrzej Duda has yet to sign a bill that would extend police powers during the November climate talks (Photo: Radosław Czarnecki)

Participants of the next UN climate talks in Poland could be banned from taking part in spontaneous demonstrations and have their personal data collected, stored and used by Polish police without their consent if a draft piece of legislation becomes law.

The proposed measures are going through Poland’s legislative process as the southern city of Katowice – located in the country’s coal heartland – prepares to host the annual UN climate talks this December.

The draft bill, which sets out specific regulations for this year’s climate talks, known as COP24, was passed by the lower house of the Polish parliament on 10 January. On Friday, the senate passed the bill almost unanimously with only three MPs abstaining.

The text provides a raft of initiatives to “ensure safety and public order”. This includes a ban on all spontaneous gatherings in Katowice between 26 November and 16 December, spanning the entire period of the annual UN climate talks.

The clause suggests that only demonstrations previously registered with the local authority in Katowice will be allowed to go ahead – effectively preventing environmental activists reacting to events unfolding during talks to stage protests in the city. The ban is not expected to apply to demonstrations organised inside the conference centre, which have to be approved by the conferences’ organising committee.

The draft bill also allows police to “collect, obtain, process and use information, including personal data about people registered as participants of the COP24 conference or cooperating with its organisation, without the knowledge and consent of the people involved”. This would include volunteers and people employed to help with the running of the conference.

In order to register for the talks, participants including government officials, NGOs, business representatives, journalists and members of civil society have to provide the UN with their full name, date of birth, nationality, a copy of their passport or another identification document, the dates they will attend the conference and an email address.

But the UN’s online registration website states that participants’ identification number, date of birth and name “will not be made available to anyone outside of the UNFCCC [United Nations Framework Convention on Climate Change]”. So it is unclear exactly how the police will access this information.

The UNFCCC has not replied to a request for comment at the time of publication.

The Polish president Andrzej Duda still has to sign the bill in order for it to become law. But one Polish activist, who preferred not to be named, told DeSmog UK it was “very unlikely” for the bill to be rejected since there had been so little opposition to it in Parliament.

This year’s climate talks in Poland are due to be pivotal for the successful implementation of the Paris Agreement. Countries are expected to finalise the accord’s rulebook and start the process of a global stocktake to ramp out ambition to reduce emissions.

The choice of the city of Katowice, which is home to the EU’s largest coal company Polska Grupa Górnicza (PGG), has angered some environmental campaigners who denounce Poland’s reluctance to fully engage in the UN process while still being influenced by a strong domestic coal industry.

Hoda Baraka, from 350.org, called the draft bill “a worrying development” but added it was “not unexpected or unplanned for”. She told DeSmog UK that the pending decision was “a step in the wrong direction” at a time when “civil society groups are increasingly squeezed out of the UNFCCC process and their rights are infringed”.

She added: “In many of the countries that groups like 350.org operate, ongoing restrictions on civil society, above and beyond the UNFCCC, is a reality that we are challenged with on a daily basis – but these clampdowns will not stop a resilient and innovative climate movement.”

The proposed regulations for the climate talks come as the Polish government’s ruling right-wing populist Law and Justice party have been strongly criticised by the European Commission for breaching the EU’s democratic values.

Since the party came into power in 2015, it has embarked on a series of reforms of the judiciary, the civil service, state media and other areas of public life, which have been widely denounced by human rights campaigners.

The new laws include an expansion of police and secret services surveillance powers, making it easier to access electronic and digital data, and a crackdown on freedom of assembly.

Environmental campaigners have also recently found themselves in an open conflict with the Polish government over the logging of the ancient Unesco-listed forest Białowieża, located on Poland’s eastern border with Belarus.

The government said it gave permission for the logging to go ahead because of damage caused by a spruce bark beetle infestation and to fight the risk of forest fires. But the claims have been denounced as a cover for commercial activities by activists.

Greenpeace activists staged numerous protests and previously chained themselves to the woodcutting equipment to stop the logging. The government’s draft bill restricting rights during the next climate talks has been seen by some campaigners as another step to stifle environmental activists in Poland.

Katarzyna Guzek, from Greenpeace Poland, told DeSmog UK the draft bill was “yet another step towards a process of limiting possibilities of civil society to manifest their opinion”.

“It is a part of a bigger trend of making life of NGO‘s as well as citizens harder when it comes to demonstrating their disagreement with the government,” she said.

Spokesman for the UNFCCC Nick Nuttall said in a statement that since the 9/11 attack, “it has been practice of UN Climate Change (UNFCCC) to share some information on participants when requested by governments hosting climate conferences”.

He added the UN “trust” the information is used “for the purposes for which it is shared”, which Nuttall said was “the timely processing of visa applications”.

The UNFCCC admitted that the online registration portal for delegates is “out of date”, adding: “We will be updating it to reflect that some data is shared with host governments.”

While declining to comment on Poland’s legal move, Nuttall said the UNFCCC “supports the right of peaceful protests and demonstrations whithin and outside conferences”. He also said the UN recognised that host governments “may need to make security and public safety judgements outside the official UN zones”.