Billions of internet-connected devices could produce 3.5% of global emissions within ten years and 14% by 2040, new research will find 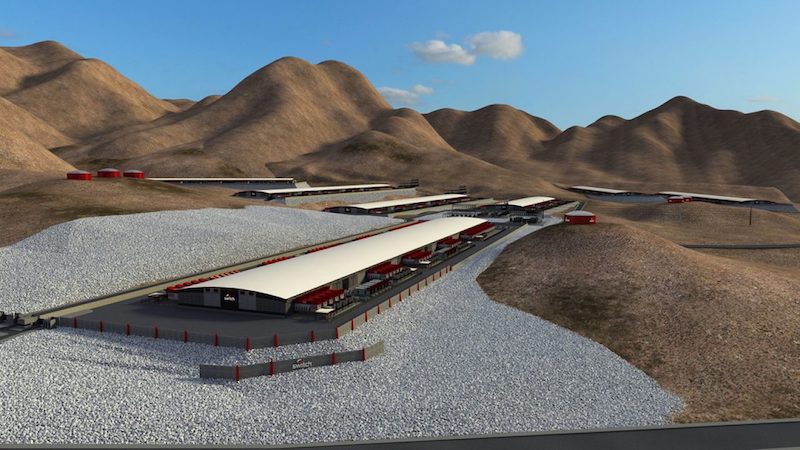 The communications industry could use 20% of all the world’s electricity by 2025, hampering global attempts to meet climate change targets and straining grids as demand by power-hungry server farms storing digital data from billions of smartphones, tablets and internet-connected devices grows exponentially.

The industry has long argued that it can considerably reduce carbon emissions by increasing efficiency and reducing waste, but academics are challenging industry assumptions. A new paper, due to be published by US researchers later this month, will forecast that information and communications technology, or ICT, could create up to 3.5% of global emissions by 2020 – surpassing aviation and shipping – and up to 14% 2040 – around the same proportion as the US today.

In an update to a 2016 peer-reviewed study, Andrae found that without dramatic increases in efficiency, the ICT industry could use 20% of all electricity and emit up to 5.5% of the world’s carbon emissions by 2025. This would be more than any country except the US, China and India.

“The situation is alarming,” said Andrae, who works for Chinese communications technology firm Huawei. “We have a tsunami of data approaching. Everything which can be is being digitalised. It is a perfect storm. 5G, [the fifth generation of mobile technology] is coming, IP [internet protocol] traffic is much higher than estimated and all cars and machines, robots and artificial intelligence are being digitalised, producing huge amounts of data which is stored in data centres.” 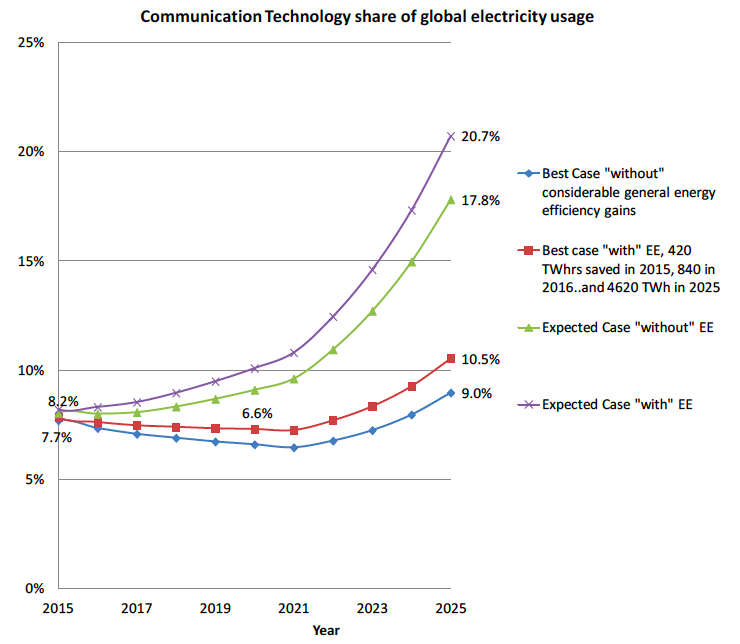 US researchers expect power consumption to triple in the next five years as one billion more people come online in developing countries, and the “internet of things”, driverless cars, robots, video surveillance and artificial intelligence grows exponentially in rich countries.

“There will be 8.4bn connected things in 2017, setting the stage for 20.4bn internet of things (IoT) devices to be deployed by 2020,” says leading internet analyst firm Gartner.

The industry has encouraged the idea that the digital transformation of economies and large scale energy efficiencies will slash global emissions by 20% or more, but the scale and speed of the revolution has been a surprise.

Global internet traffic will increase nearly threefold in the next five years says the latest Cisco Visual Networking Index, a leading industry tracker of internet use.

A 2016 Berkeley laboratory report for the US government estimated the country’s data centres, which held about 350 million terabytes of data in 2015, could together need over 100TWh of electricity a year by 2020. This is the equivalent of about 10 large nuclear power stations.

Data centre capacity is also rocketing in Europe and Asia with London, Frankfurt, Paris and Amsterdam expected to add nearly 200MW of consumption in 2017, or the power equivalent of a medium size power station.

“We are seeing massive growth of data centres in all regions. Trends that started in the US are now standard in Europe. Asia is taking off massively,” says Mitul Patel, head of EMEA data centre research at global real estate advisor CBRE.

“The volume of data being handled by such centres is growing at unprecedented rates. They are seen as a key element in the next stage of growth for the ICT industry”, says Peter Corcoran, a researcher at the university of Ireland, Galway.

Ireland, which with Denmark is becoming a data base for the world’s biggest tech companies, has 350MW connected to data centres but this is expected to triple to over 1,000MW, or the equivalent of a nuclear power station size plant, in the next five years.

Permission has been given for a further 550MW to be connected and 750MW more is in the pipeline, says Eirgrid, the country’s main grid operator.

“If all enquiries connect, the data centre load could account for 20% of Ireland’s peak demand,” says Eirgrid in its All-Island Generation Capacity Statement 2017-2026 report.

Climate Weekly: The week’s climate news, in your inbox

The data will be stored in vast new one million square feet or larger “hyper-scale” server farms, which companies are now building. The scale of these farms is huge; a single $1bn Apple data centre planned for Athenry in Co Galway, expects to eventually use 300MW of electricity, or over 8% of the national capacity and more than the daily entire usage of Dublin. It will require 144 large diesel generators as back up for when the wind does not blow.

Pressed by Greenpeace and other environment groups, large tech companies with a public face , including Google, Facebook, Apple, Intel and Amazon, have promised to use renewable energy to power data centres. In most cases they are buying it off grid but some are planning to build solar and wind farms close to their centres.

Greenpeace IT analyst Gary Cook says only about 20% of the electricity used in the world’s data centres is so far renewable.

“The good news is that some companies have certainly embraced their responsibility, and are moving quite aggressively to meet their rapid growth with renewable energy. Others are just growing aggressively,” he says.

Architect David Hughes, who has challenged Apple’s new centre in Ireland, says the government should not be taken in by the promises.

“Using renewable energy sounds good but no-one else benefits from what will be generated, and it skews national attempts to reduce emissions. Data centres… have eaten into any progress we made to achieving Ireland’s 40% carbon emissions reduction target. They are just adding to demand and reducing our percentage. They are getting a free ride at the Irish citizens’ expense,” says Hughes.

Eirgrid estimates indicate that by 2025, one in every 3kWh generated in Ireland could be going to a data centre, he added. “We have sleepwalked our way into a 10% increase in electricity consumption.”

Fossil fuel plants may have to be kept open longer to power other parts of the country and the costs will fall on the consumer, he says. “We will have to upgrade our grid and build more power generation both wind and backup generation for when the wind isn’t there and this all goes onto people’s bills.”

Under a best case scenario, says Andrae, there will be massive continuous improvements of power saving, renewable energy will become the norm and the explosive growth in demand for data will slow.

But equally, he says, demand could continue to rise dramatically if the industry keeps growing at 20% a year, driverless cars each with dozens of embedded sensors, and cypto-currencies like Bitcoin which need vast amounts of computer power become mainstream.

“There is a real risk that it all gets out of control. Policy makers need to keep a close eye on this,” says Andrae.

Read more on: Energy | IT Energy