Macron: France will replace US funding for UN climate science

French president said Europe must step into the leadership role the US had abandoned, while Angela Merkel struggled with Germany’s political uncertainty 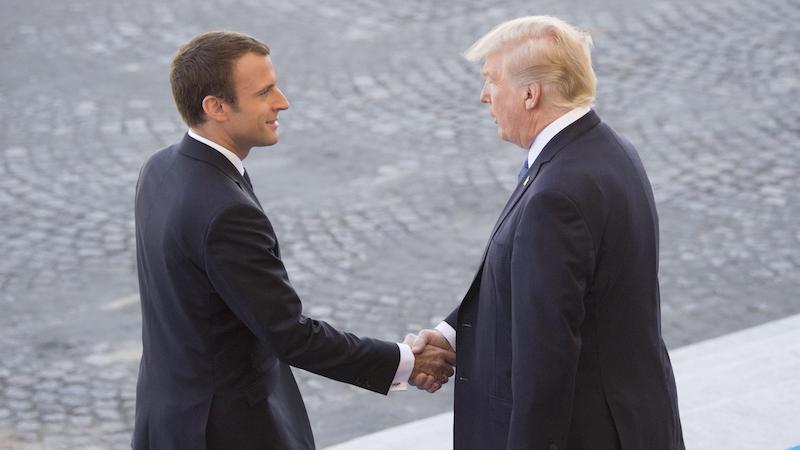 French president Emmanuel Macron sent a pulse of excitement racing through the Bonn climate summit with a speech seizing the mantle of climate leadership from the US.

In an address to a conference charged with writing the rules of the deal struck in Paris in 2015, Macron promised to replace the $2 million annual donation withdrawn by the US from the UN’s Intergovernmental Panel on Climate Change (IPCC).

The president also called for a border tax to protect EU industry against parties that do not share its climate goals, and promised efforts to haul EU carbon prices up to €30 per tonne.

His speech followed a cautious address by the summit’s co-host, the German chancellor, Angela Merkel, which Green MPs involved in coalition talks said cast new doubts on the prospect of a governmental pact.

Macron by contrast was bold. On the IPCC, he said: “We need scientific information which is constantly nourished to ensure clear decision making. The IPCC is one of the major components of this work.”

“However, it is threatened today by the decision of the US not to guarantee funding for it. Therefore, I propose that the EU replaces the USA, and France will meet that challenge.”

While France hoped that other EU countries would also contribute, “I can guarantee that starting in 2018, the IPCC will have all the money it needs and will continue to support our decision-making. It will not miss a single euro,” Macron said.

On carbon markets, Macron said that France would be “working hard” to achieve a €30 per tonne carbon fee, “the price that will make it possible to change the behaviour of investors in industrial circles”.

He added: “In particular, we need a border tax to make it possible to protect industry sectors, as there are imports from countries not respecting these goals.”

Merkel, once dubbed the ‘climate chancellor’ – but also a stalwart defender of Germany’s car industry and power utilities – acknowledged that her country had “a long way yet to go” to meet its target of cutting emissions 40% by 2020.

But while it was “important to fulfil obligations we entered into”, she said, “social issues come to fore when we talk about coal. We have to think: is such a scheme economically viable and affordable? Even in a rich country like Germany, there are important conflicts in society that need to be solved and settled in a reliable, calm and collected manner.”

Around 40% of Germany’s energy comes from coal – much of it heavily polluting brown lignite, which is pushing Germany to overshoot its 2020 emissions target by some 120 million tonnes, according to estimates.

The action needed on coal was something “we have to discuss in precise terms in the days to come,” Merkel said, in a nod to the ongoing coalition talks due to end on Friday.

Annalena Barbock, an MP in the German Green Party’s negotiating team told Climate Home that Merkel’s speech would not help to unblock coalition talks that were currently “stuck” over the twin issues of climate goals and reduction in coal use.

“I don’t know if this was Merkel playing hardball or not but it was a true disappointment for me as a Green negotiator,” she said. “It was also a true disappointment for me as a climate politician and as a human being. She said at the beginning of her speech that climate change was a challenge to the destiny of humankind. If this is the answer, then we have to be very worried.”

The US coal industry at least might take some heart from Merkel’s apparent reluctance to speed up the German coal phase out, albeit in terms that might not please Germany’s 20,000 coal miners.

Speaking to Climate Home last week, Barry Worthington, director of the US Energy Association, said: “Germany doesn’t like to talk about it, but it is burning US coal for power consumption. Everyone wants to talk about renewables deployment but since World War II, its been buying and burning US coal and it continues to do so.”

Earlier in the conference plenary, the UN secertary-general Antonio Guterres had warned that the window for limiting global warming to 2C would close within five years.

With an estimated $825bn invested globally in fossil fuels and other high-emissions sectors last year, he said: “We must stop placing bets on an unsustainable future that will place savings and societies at risk,” he said. “Markets need to be reoriented away from the counter-productive and the short term.”

“The world should adopt a single rule,” he added. “If big infrastructure projects are not green, they should not be given the green light”

A high carbon price in market covering at least 50% of the world’s economy would be needed to meet the Paris targets, the UN chief said.

“I urge G20 countries to set a strong example,” he concluded.