Governor says state will use the courts to block the erosion of US climate actions, ‘just like the Republicans tried to block Obama’s efforts’ 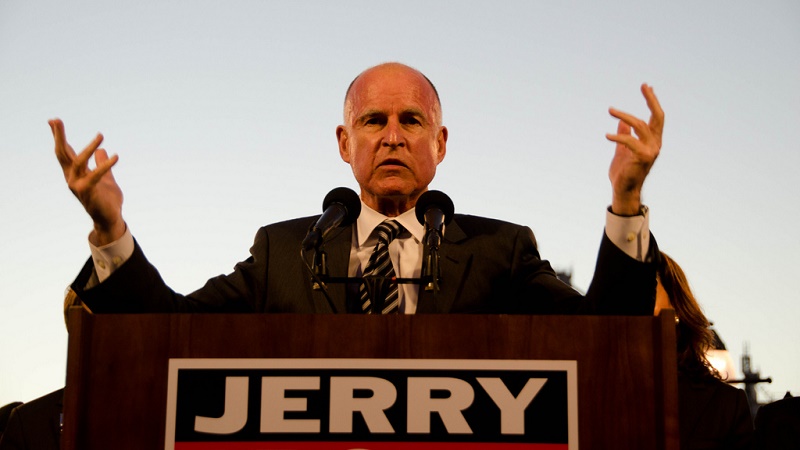 'I think Trump sees this as a galvanising rhetoric for his base,' California governor Jerry Brown told the BBC. (Photo: Flickr/Steve Rhodes)

California governor Jerry Brown said on Tuesday that his state would fight Donald Trump’s erosion of climate action through the courts.

Trump’s actions since coming into office have favoured polluters. Particularly the elevation of Scott Pruitt to the head of his environment agency. Pruitt, who has close ties to the industrialist Koch brothers, announced this month he was rolling back president Barack Obama’s key climate legislation, the clean power plan.

Speaking to the BBC’s Today programme on UK radio, Brown said California would continue to use this tactic in response to Trump’s anti-climate actions.

“First of all we can go to court and block his efforts and we are doing that. Just like the Republicans tried to block Obama’s efforts,” he said. The clean power plan itself was subject to a lawsuit from 28 mostly Republican states. That suit has now been suspended.

New York is reportedly preparing a lawsuit to protect the clean power plan. California’s attorney general Xavier Becerra has repeatedly sued the federal government this year over a number of issues, including the environment, and has said he would “everything in my power to defend the Clean Power Plan”.

Trump infamously described climate change as a “Chinese hoax” in 2012 – long before he emerged as a contender for the Republican presidential nomination. But after his election, he told the New York Times he had an “open mind” on the issue.

Brown was asked by the BBC whether he believed Trump thought climate change was “an illusion”.

“No, I don’t believe that,” said Brown. “But he, like politicians, work their constituency. And I think he sees this as a galvanising rhetoric for his base.”

That rhetoric includes an announcement that he intends to withdraw from the UN Paris Agreement. Something which, under the terms of the deal, he cannot do until just before his first term ends in 2020. (On Monday, Nicaragua indicated that they were preparing to sign the accord, leaving Syria – perhaps to be joined by the US – as the only nation not a signatory.)

Brown also noted that Trump, already struggling to pass major legislation, could be hamstrung by the midterm elections next year.

“At the same time there will be an election in 2018. Hopefully we’ll have one or two of the houses go from Republican to Democrat,” he said.

He also noted the “under-2” coalition of states, nations and cities he has helped to build.

“We are linking up with other similar-minded people all over the world and we are pushing forward. Even as Trump blusters, he cannot command the tides to not come in,” he said. Governments in the coalition, which commits to sharp carbon cuts, already control 39% of global GDP and represent one in every seven people on earth.