India has emerged as the world’s largest importer of petroleum coke, an oil byproduct that is now a major cause of pollution in the capital 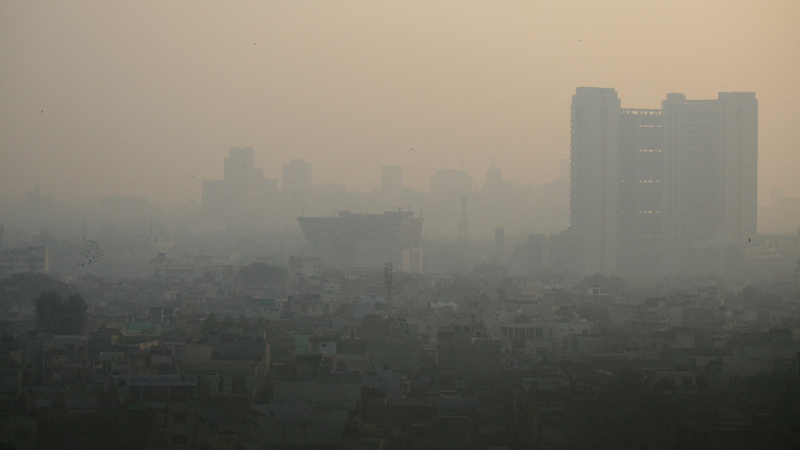 Last winter, Delhi was placed under a state of emergency as smog settled over the city (Photo: Jama Masjit)

Come winter and the Indian capital, New Delhi, is preparing to once again struggle beneath the noxious fumes that have become a perennial crisis.

Eight Delhiites die each day from the city’s bad air. In response, the regional government has made efforts to tackle pollution from coal plants and tailpipe exhaust. But any benefits these policies might produce are threatened by skyrocketing imports of a fuel more polluting than coal or diesel.

Petroleum coke – known as petcoke – is a high-carbon residue produced during the refinement of heavy oils. In its raw form, the high-carbon fuel can be used as a cheap substitute for coal.

Delhi’s environmental authorities say petcoke, cut into coal power station feeds around the capital, is now one of the major sources of smog in the city.

In many parts of the world, petcoke is restricted because of its toxicity. In India however, the fuel is unregulated and burned freely. In this regulatory void, demand has soared, rising 23% a year for the last five years. The country imported 20 times more petcoke in 2016 than it did in 2011.

Delhi is in a race against time. The Supreme Court has ordered the use of petcoke to end but the government has failed to ban or regulate the fuel. Activists and public health officials are desperate to convince politicians to act before winter’s still, stagnant weather conditions begin to pool smog above the capital. 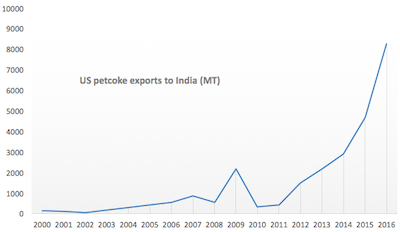 When burned, petcoke emits 5-10% more climate change-causing CO2 than coal. But its true filthiness is revealed in the toxic smog it creates. The key air pollution-causing contaminant is sulphur, which creates oxide gases and particles, both of which are harmful to human health.

Petcoke’s primary use in India is in cement-making plants, where the process limits pollution. But when it is used in the coal power stations, the pollutants emerge unadulterated.

In February, India’s Supreme Court released a finding that called the sulphur content in petcoke “extremely high” and said the fuel was a “major cause of pollution in Delhi”. The court directed the national government to either ban petcoke’s use in power generation outright or place restrictions on the sulphur content, which would be a de facto ban.

So far, no action has been taken. The ministry of environment has asked for more time. The court has given the government a final deadline of 24 October to come up with a plan.

This is a problem that begins, in part, in the tar pits of Alberta and the refineries of the US Gulf coast. India produces its own petcoke. But local refineries can’t keep up with demand and the country has emerged from nowhere to become the largest importer of petcoke on earth.

In 2016, 87% of India’s overseas petcoke came from the US, the world’s largest producer. Its use in US power generation has plummeted due to heavy restrictions. As a result, US refiners and traders are looking to markets with looser regulation and, say environmental campaigners at both ends of the supply chain, fuelling India’s airborne public health crisis.

Until 2014, China was the biggest buyer of US petcoke. But Asia’s largest economy has been on a political journey with air pollution. Sulphur restrictions, brought in in 2016, economic downturn and local bans on new power plants combined to stifle US petcoke’s access to the far east powerhouse. Between 2013 and 2014, the trade was cut in half. (Japan also remains a stalwart consumer of US petcoke.)

Global trade in petcoke is dominated by one country, the US (Data: resourcetrade.earth)

“India has become the dumping ground of petcoke from countries like USA and China,” Sunita Narain, who heads the Centre for Science and Environment, told the Economic Times in February. Narain is not only pushing for a domestic ban on petcoke’s use in power plants but an import ban as well.

Lorne Stockman, a senior research analyst at Oil Change International, said much of the US petcoke was left over from the refinement of heavy oil from Canada’s tar sands. Environmental restrictions in the US prevent it from being burned in most power stations, unless they are fitted with pollution scrubbing technology.

“The US refiners have invested in this heavy oil refining strategy in order to take advantage of the cheap dirty feed stock from Canada,” he told Climate Home. “Then this waste product is dumped into markets that will accept it. It’s a perfect example of the industry maximising its profits while maximising its pollution.”

It is uncertain how much petcoke is being burned around Delhi, according to an EPCA report, as refiners do not collect data on how much is being sold into the capital territory. It is also uncertain what proportion comes from the US, as opposed to domestic refineries. During site visits, however, EPCA inspectors found industries were using imported product.

The trade within India is controlled by some of the biggest, most influential and least transparent corporations in the country, including Adani Enterprises. Adani’s website says it sources petcoke from the US.

Climate Home contacted some of the largest US petcoke exporters. None returned emails except for Ahmed Jama, CEO and president of Florida-based PermuTrade.

“I cannot speak for other companies,” he said. “But I do know petcoke is being sold into the power generation industry and steel industry [in India].”

PermuTrade is a relatively small fish. Jama said his company transports between 0.6Mt and 1.2Mt of petcoke every year, 75% of which goes to the cement industry in India. According to Jacobs Consultancy, Koch Carbon trades more than 20Mt globally every year. Oxbow, another company owned by the Koch brothers, also ranks among the largest global traders.

Jama said his company sells only to cement plants to ensure the “environment is protected”. “We could make a lot more money selling petcoke to many other industries, like the power generation industry and steel industry but we are not all about the money,” he said, adding that an India-wide ban on petcoke “might not be the greatest idea”.

“Petcoke should be banned or limited for captive power plants but not for cement plants. There should be clear sulphur emission thresholds in place for companies to comply with and be held accountable to. If petcoke is cut, the government will need to provide cheap coal or they won’t have power,” said Jama.

In fact, environment authorities are not pursuing a ban on use in cement. But they are trying to control power plant emissions before Delhi again disappears beneath the smog of industry.