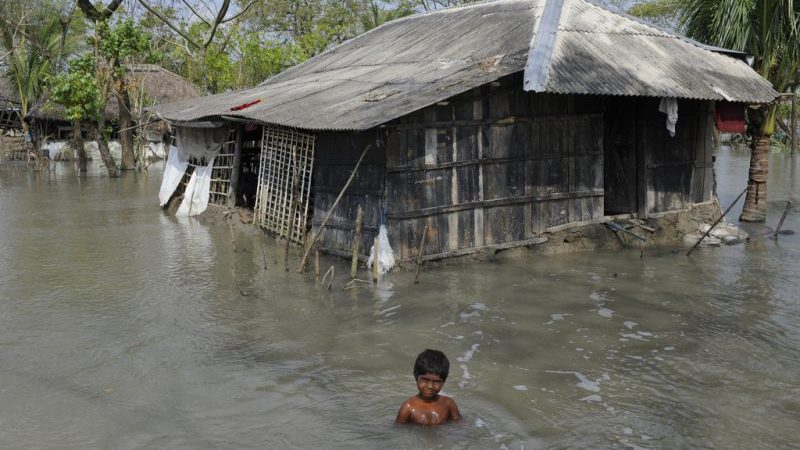 Bangladesh is vulnerable to flooding and other impacts of climate change (Pic: DfID/Rafiqur Rahman Raqu)

By Megan Darby in Dhaka

Countries hit hard by climate change are struggling to access a UN-backed fund intended to help them cope. That was the refrain at a conference in Dhaka this week.

Only one Bangladeshi institution, Infrastructure Development Company Limited (Idcol), has won accreditation to partner with the GCF so far. It had to upload 188 documents in a process that took almost two years, according to a government official.

“This is one of the biggest problems with the GCF,” said Mohammad Iftekhar Hossain, who has responsibility for coordinating GCF activities in the country. “It doesn’t matter that we are one of the most vulnerable countries [to climate change]… it is still hard to get the money.”

Another Bangladeshi body, Palli Karma-Sahayak Foundation, is hoping to get accredited in November. A third, the Local Government Engineering Department, is receiving “readiness” support from the GCF to prepare it for applying in future.

Out of 54 institutions the GCF has signed up to receive cash, 24 are national entities. Most of these are only entrusted with handling small or micro projects.

This leaves people exposed to rising seas, flood, drought and intensifying tropical storms reliant on big multilateral funders to deliver the bulk of support. Yet even established development banks have been slow to get money moving.

An $80 million project led by Germany’s KfW to build disaster shelters in coastal Bangladesh was among the first to get GCF approval in October 2015. Not a penny has yet been disbursed.

Meanwhile, Hossain said, other sources of development finance in the area are drying up in anticipation of the GCF scheme.

Then there is a bid led by the UN Development Programme (UNDP) to provide clean drinking water in places affected by saltwater intrusion. It was withdrawn before the GCF board could reject it last December, after some members questioned its climate credentials. UNDP is reviewing the proposal.

Some at the conference, organised by Transparency International Bangladesh, advocated bypassing the UN bureaucracy.

“If you have engaged with people and do not come back to them within 6-8 months, you have lost their trust already,” said Sandeep Roy Choudhury, head of climate finance at VNV Advisory Services in India. “You talk to a farmer about an adaptation project in 2014, you come back in 2017 and say ‘we are ready to do it’, he has already lost five crop cycles.”

VNV is finding finance for community-based adaptation projects, 80% of it from the private sector, said Choudhury: “Let the different policy players do what they do… but there is a huge space still left at the mid- and the micro-level project. And that can make a huge difference, in my opinion.”

Others said that while the GCF process might seem onerous, in the longer term institutions would benefit from raising their reporting standards.

“It is quite a challenge meeting the requirements of the GCF,” said Firdaus Ara Hussain, climate finance governance advisor at GIZ, a German development bank. For example, the GCF asks for financial statements. Bangladesh’s environment department, which wants to be able to disburse GCF money, does not routinely produce that information.

Responding to the criticisms, GCF spokesperson Michel Smitall said the process was intended to uphold fiduciary principles and environmental and social safeguards.

“The fund will continue to maintain these high standards, while recognising the ongoing dynamic between speedy administration and due diligence,” he said. At the board’s latest meeting in July, it took decisions to “streamline” the process, Smitall added.

Comment: Climate adaptation cash is failing to reach the poorest; here’s how to fix it

Set up alongside the Paris climate agreement as a symbol of solidarity and cooperation, the GCF has particular political significance. Developed and developing countries are equally represented on the board, deciding how to spend its pledged $10 billion starting capital.

Yet a lack of institutional capacity remains an obstacle to poorer countries pushing their priorities.

The poorest countries are most concerned with with adaptation: protecting citizens from a hostile climate they did little to create. A third of Bangladesh was this year flooded by particularly heavy monsoon rain, destroying an estimated 100,000 homes. The country’s GDP growth over the past four decades has been suppressed 0.5-1% a year by repeated weather-related disasters, the World Bank estimates.

Donor governments, on the other hand, tend to be more interested in mitigation: putting the developing world on a clean energy path so it does not make the problem worse for everyone. The private sector also skews towards carbon-cutting ventures, which offer more opportunities for profit.

To date, 27% of the $2.2bn committed by the GCF is purely focused on adaptation. Another 32% claims to be cross-cutting. That figure includes a controversial hydropower refurbishment project in Tajikistan, on the basis that it will prepare the facility for greater variation in river flow.

Mizan Khan, professor at Dhaka’s North South University and climate finance negotiator, said it was important to show how adaptation benefitted the international community. “We need to reconceptualise adaptation as a global issue if we are going to get the funding,” he said.