Large hydropower dams have no place in the Green Climate Fund

The UN’s flagship climate finance initiative should be driving innovation, not wasting money on old technology saddled with resilience and human rights concerns 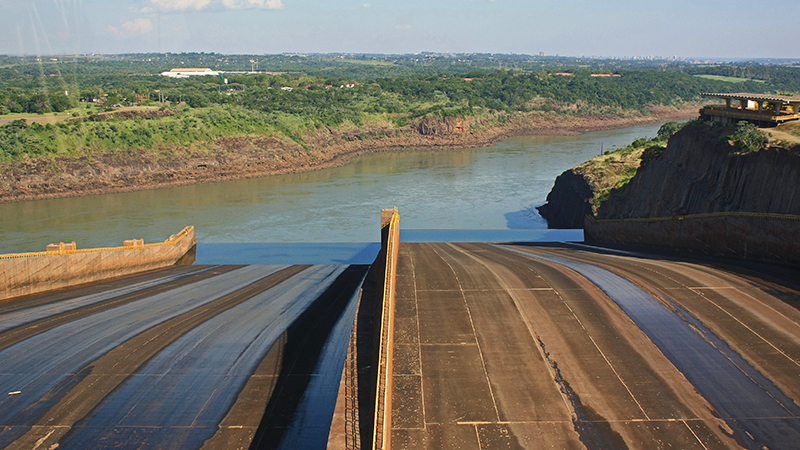 Big hydro funding proposals have not been assessed for sustainability of river flows in a changed climate future (Pic: Flickr/ alobos Life)

By Joshua Klemm and Florencia Ortúzar in Songdo

It is cause for hope, due to its ability to move large sums of money from rich countries to those most at risk and least responsible for climate change. But what if scarce climate dollars, already likely to take a large hit with the Trump presidency, are used to fund projects that don’t make climate sense?

Worryingly, the GCF is poised to consider financing its first large hydropower investments at its board meeting this week. Large hydro is a non-innovative, last-century technology with no place at the GCF, whose mandate is to promote a paradigm shift toward low-emission and climate-resilient sustainable development.

Not only does large hydro – a fully mature technology – lack any potential to transfer new technologies, it’s also a bad bet for reducing greenhouse-gas emissions or helping countries adapt to a warming world.

Large hydropower reservoirs emit considerable amounts of methane, which is 30 times more climate intensive than CO2. A recent study by researchers at Washington State University found that methane emissions released from dam reservoirs are far greater than previously believed, accounting for 1.3% of all human-caused climate change. In some cases, hydropower projects can emit more greenhouse gases than coal-fired power plants, generating the same amount of electricity.

Large hydropower is also particularly vulnerable to the impacts of climate change. Droughts have crippled hydropower generation all over the world, leading to energy rationing and blackouts from the US to China, from Brazil to Southern Africa.

Many countries in the global South are already alarmingly over-dependent on climate-vulnerable hydropower, making them especially prone to energy crises. These countries urgently need to diversify their energy mix in order to improve their resilience to climate change.

Meanwhile, the negative environmental, social and economic impacts of large hydropower are well documented. By interrupting rivers and flooding lands, large dams cause widespread population displacement and irreversibly harm livelihoods and ecosystems. Because they routinely cost double their estimates, large dams are a bad investment for borrowing governments.

Hydro projects in the GCF pipeline

Upper Trishuli-1 Hydro, Nepal: This proposed 216 MW river diversion project in the Himalayas would be just one of more than 30 hydro projects currently either operating, under construction, or planned on Nepal’s Trishuli River, and thus is truly a business-as-usual project. Despite acknowledging that climate change could “severely affect hydropower in Nepal”, the project’s assessment notes the “potential effects of climate change on flows (…) have not been considered” in the project’s design. Furthermore, the project would deepen Nepal’s overdependence on climate-vulnerable hydro – already over 90% – and would have significant impacts on indigenous communities and the environment that have not been adequately studied or addressed.

Qairokkum Dam Rehabilitation, Tajikistan: GCF will also consider a $50 million investment for the rehabilitation of a Soviet-era dam in Tajikistan, built in the 1950s. Rehabilitating ageing infrastructure may make economic sense, but it is no way transformational as GCF criteria requires. While the investment would upgrade the dam to accommodate extreme weather events, the project does nothing to alleviate the country’s alarming overdependence on hydropower (98% of its energy comes from dams), a sector the project documents recognize as “highly exposed to climate change risks.”

Tina River Hydro (Solomon Islands): This 15 MW project is intended to reduce the Solomon Islands’ reliance on imported diesel, but it lacks an assessment of climate vulnerability, fundamental for dams that depend on weather related patterns. At the same time, the project threatens a world-class biodiversity hotspot included on UNESCO’s Tentative List of World Heritage Sites. The fact that there is considerable renewable energy potential in the country is cause to wonder why GCF resources would go towards the least flexible and more risky option, discarding quicker and cheaper solutions.

The GCF should promote truly transformational energy projects that help developing countries become more climate resilient. The World Bank notes, for example, that solar energy is the ideal complement to Nepal’s hydro generation because it can produce power when rivers slow during the dry season. Rather than refurbish ageing infrastructure in Tajikistan or construct a new dam in the Solomon Islands, GCF should help these countries become more climate resilient, by supporting renewable energy solutions that are flexible and abundant, but not sufficiently studied.

Indeed, renewable energy is getting cheaper every day, and becoming the necessary protagonist of the global energy transformation that must be accelerated if countries are to meet their development goals in a warming planet.

Business-as-usual hydro projects, historically favored by the developed world, are no solution for developing countries to address climate change, which is why we need the Green Climate Fund to support the innovative solutions that we so urgently need.