Trump letter to UN on leaving Paris climate accord – in full 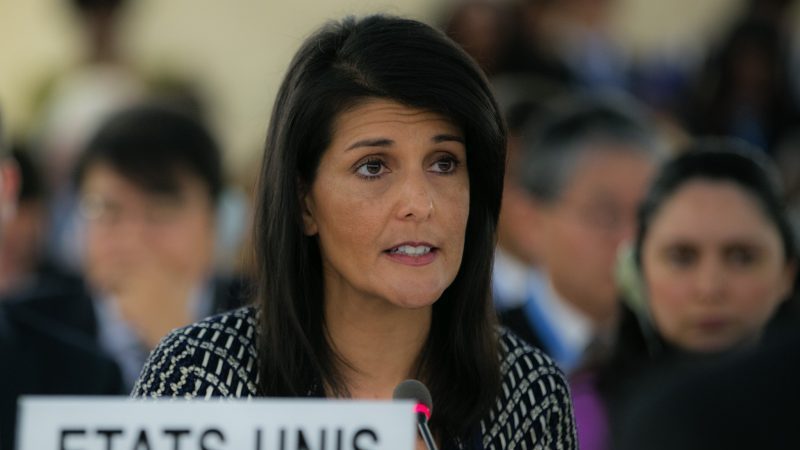 Nikki Haley, US ambassador to the UN, sent a letter to signal US plans to leave the Paris climate pact (Pic: Flickr/US Mission Geneva)

On Friday, the Trump administration dropped the UN a legally unnecessary but politically charged note regarding its intention to leave the Paris climate agreement.

Under the terms of the accord, no nation can withdraw until November 2020 and cannot even formally notify the UN of its intention to leave until 2019. So the communication serves only for Donald Trump to remind the world he is seeking “suitable terms for reengagement”.

The letter, sent to UN secretary-general António Guterres by the US representative to the UN Nikki Haley, reads:

The Representative of the Unites States of America to the United Nations avails herself of the opportunity to renew to the Secretary-General the assurances of her highest consideration.

“The president’s original announcement suggested (but did not say explicitly) that the United States would be withdrawing only from the Paris Agreement, not also from the Framework Convention on Climate Change (which the United States joined in 1992). Withdrawal from the Convention would have accelerated withdrawal from the Paris Agreement by a few years, but would have been perceived as an even more dramatic walk-back from international climate engagement.”

The reference to the specific paragraph, says Biniaz, “makes clear that the intent is to withdraw from Paris only”.

On Friday, Guterres’ spokesman Stéphane Dujarric said the secretary general saw the US decision as a “major disappointment for global efforts to reduce greenhouse gas emissions and promote global security”.

On Trump’s offer of renewed US involvement under unspecified terms, Dujarric added: “The secretary general welcomes any effort to reengage in the Paris Agreement by the United States”.

In a media release (below) from the State Department, the terms of reengagement are fleshed out slightly. If the agreement can be demonstrably more favourable to the US economy, it says, then Trump will reconsider. In reality, the Paris Agreement allows the US to choose the emissions cuts it makes (or does not make). It is hard to imagine terms more favourable than “do as you see fit”.

But this is a political game. Trump wants to be seen to be renegotiating a better deal for the US people. How this plays out will depend entirely on which narrative he deems more in his political interest.

If he eventually leaves, it will be because the agreement was “draconian” and leaders who want to hurt the US refused to negotiate with him. If he reverses his position, it will be because he thinks he can sell a downgrade of the US’ commitments to the accord as a crushing diplomatic win. He has three years to make that calculation, by which time he will be running for reelection.

The media release also includes language that calls for continued, cleaner burning of fossil fuels. In recent international forums such as the G20 and G7, the US has pushed for such language to be included in formal texts, much to the chagrin of other leaders.

Critically, the US also states its intention to maintain diplomatic engagement in the UN climate process while it remains a party to the agreement. That means state department teams continuing to show up until the US can formally leave the agreement in 2020.

The United States supports a balanced approach to climate policy that lowers emissions while promoting economic growth and ensuring energy security. We will continue to reduce our greenhouse gas emissions through innovation and technology breakthroughs, and work with other countries to help them access and use fossil fuels more cleanly and efficiently and deploy renewable and other clean energy sources, given the importance of energy access and security in many nationally determined contributions.

The United States will continue to participate in international climate change negotiations and meetings, including the 23rd Conference of the Parties (COP-23) of the UN Framework Convention on Climate Change, to protect U.S. interests and ensure all future policy options remain open to the administration. Such participation will include ongoing negotiations related to guidance for implementing the Paris Agreement.