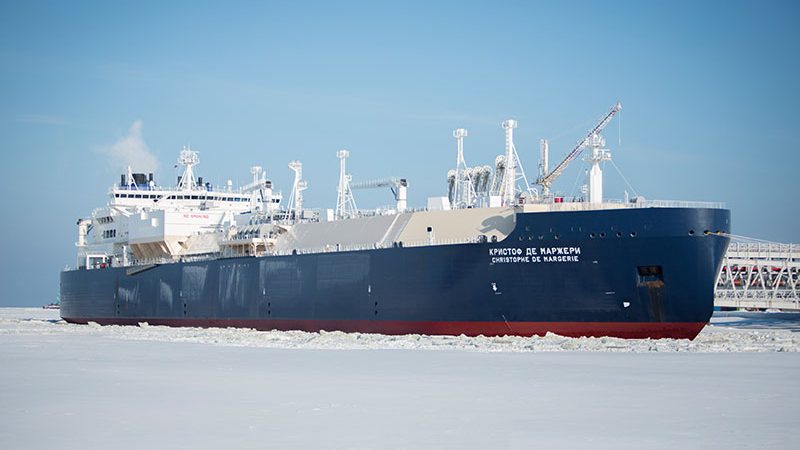 The Christophe de Margerie is capable of sailing through ice up to 2.1 metres thick (Pic: Sovcomflot)

A commercial ship has crossed the Arctic’s northern sea route without an icebreaker escort, in the first such voyage logged by Russian administrators.

To take advantage of shrinking Arctic sea ice, Russian oil and gas shipper Sovcomflot invested in a carrier that can ply the polar seas year-round.

On its maiden voyage, the Christophe de Margerie completed the northern sea route in record time: six and a half days. The ship carried a cargo of liquefied natural gas (LNG) from Norway to South Korea in 19 days, about 30% quicker than a typical passage by the Suez canal.

Maritime traffic along Russia’s northern coastline is increasing in tandem with industrial developments, enabled by global warming. State company Rosatomflot reported a doubling in demand for its nuclear icebreaker escorts between 2015 and 2016.

Spears said: “There has always been a window in the summer period where we have been able to go through there with an icebreaker escort. Now, that window is getting a little bit longer. That obviously reflects different climatic conditions.”

Designed to plough through sea ice up to 2.1 metres thick, the Christophe de Margerie can operate independently and not only in the summer months, giving it an edge over competitors. The Cypriot-flagged vessel is named for the former chairman of French oil major Total, who died in a plane crash at a Moscow airport in 2014.

Comment: One kilometre along the Arctic sea ice – my hardest ever swim

While sea ice in the Arctic grows and shrinks with the seasons, there is an overall declining trend, as north pole has warmed roughly twice as fast as the global average.

In March 2017, the annual maximum extent of Arctic sea ice hit a record low for the third straight year, according to the US National Snow and Ice Data Centre.

The fact that Sovcomflot invested in an ice-capable LNG carrier showed it was expecting the trend to continue, said Andrew Holland of the American Security Project.

“Even 10-12 years ago, you would not have been thinking about this as an option at all,” he told Climate Home. “It was too unpredictable and folks were saying: maybe we will get an open Arctic a long time from now. Businesses, in order to plan for this, have to really see this trend over multiple years; they are not going to make huge investment based on one or two years [of low ice conditions].

“Since Arctic ice fell off in 2007, it has been this significant long term trend. There is no denying it. This is a very clear and predictable effect of climate change.”

Truls Gulowsen of Greenpeace Norway criticised “greedy companies” for exploiting the meltic Arctic as a business opportunity. Instead, he said they should see it as “a message from Earth that we need to get off fossil fuels as soon as possible”.

When Russia went to war with Japan in 1904-05, its eastern port of Vladivostock was ice-bound for half the year. Reinforcements from its Baltic fleet had to travel thousands of miles around Africa to reach the arena of battle. When they arrived, resources depleted, the Russian fleet suffered heavy defeats.

While there is nothing to suggest Russia is headed for another conflict, Holland said the dynamics of military power were shifting along with the sea ice: “Things like this have unpredictable consequences.”

Other countries are also eyeing opportunities in the thawing polar region.

Icebreaker Xuelong (snow dragon) is attempting China’s first circumnavigation of the Arctic, state news outlet Xinhua reports. An onboard team of 96 people is carrying out frontier research on everything from geology to ocean acidification, chief scientist Xu Ren said.