One kilometre along the Arctic sea ice – my hardest ever swim

Comment: When Lewis Pugh finished his 22-minute, awareness-raising swim his hands were so frozen he hand to grip onto his photographer with his teeth 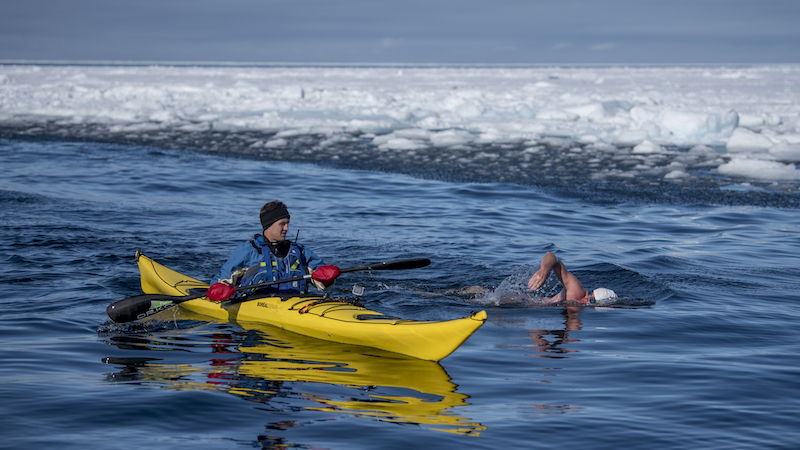 "Anyone who tells you they enjoy swimming in freezing water is either mad, or has never done it." (Photo: Kelvin Trautman)

I love everything about my polar campaigns, except for the tense hours just before a swim.

The anxiety before this last swim, along the edge of the Arctic sea ice, was the worst I’ve ever experienced.

The training leading up to it was not what I’d wanted. Even though my preparation went well, and I was fit and strong – probably in the best pre-swim condition ever – there was just not enough cold water training.

When I arrived in Longyearbyen, Spitsbergen for the final acclimatisation, the water was 10C (50F) – and this was just 1,300 kilometres from the North Pole! Yet another example of the runaway climate change we are witnessing in the Arctic.

When I did my North Pole swim in 2007, there were a number of leaders denying what was happening in the Arctic. Today there is just one.

This swim returned us to the high Arctic ten years later to show the world the speed at which things are changing, and remind our leaders that what happens here affects all of us.

There were some added pressures on this swim. For one, we had a Sky News team on the expedition filming a documentary – the first time we’d had a TV crew on board.

This would be my fifteenth long distance swim in very cold water. People assume that it gets easier over time. It doesn’t. It gets harder, because you know the place you’re going to; you know the pain you’re in for. Once you experience such extreme cold, you never really thaw out. Plus I’m not getting any younger.

Before I set out on this expedition I wrote the names of every person who has helped me prepare for this swim. There were 67 names in all, starting with Professor Tim Noakes who pioneered the science behind my cold-water swimming. Now I had one of the most competent safety officers a swimmer could wish for in Karin Strand, I had photographer Kelvin Trautman close by, and safety paddler Kyle Friedenstein alongside.

The setting was perfect; a brilliant sunny day and a clean edge of Arctic sea ice at 80° North, along which to mark our kilometre. When the team measured the water temperature, it was minus 0.5C (31F). They told me it was 2C (37F). In retrospect, I’m glad they kept the truth from.

I've received lots of questions about how I’m able to swim in the Arctic. Read this thread > pic.twitter.com/rsop2Iqyov

The moment I dived in I knew I had a problem. The sun never sets this far north in July, and at this latitude it angled straight into my eyes. I couldn’t see Kyle’s signals, and I couldn’t hear him shouting directions. I had to rely on counting strokes to measure my distance.

My cadence was off from the start. Perhaps it was the shock of sub-zero water, but whereas I usually count 100 strokes for 100 metres, it took me 130 strokes to reach that same distance. At 650 metres I was struggling to coordinate my kick, and my hands were frozen so they couldn’t grip the water. I stopped and shouted to Kyle, ‘I think I’m finished. Let’s get out!’

But at that moment, the support boat, which had been filling with water, had to peel away in a wide circle to clear the sluices. It was easier to swim on than to tread water in the freezing sea. I decided to try and squeeze out another 50 metres. 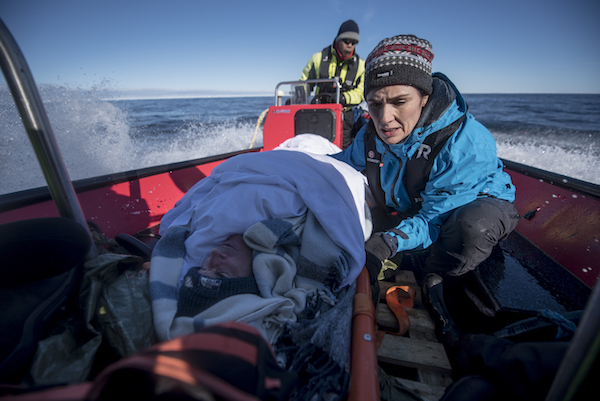 “I don’t remember ever having been so cold”
(Photo: Kelvin Trautman)

Earlier in the day, I’d given a talk on board the expedition vessel about my North Pole swim. I spoke about how frightened I was diving into the unknown, how breaking that swim into manageable chunks had helped me get though it, and how quitting can very easily become a habit.

Having relived that day, 10 years ago to the day, how could I give up now? I decided to press on to 750m. Once I got there, I reached for 800m. At 900m my body was shutting down, and I hardly remember the rest of the swim. But somehow I crawled to the end.

At 22 minutes in the water, it was my longest sub-zero swim, and it took its toll. I don’t remember ever having been so cold. Getting into the support boat was an ordeal. Kelvin Trautman had to stop taking photos to help me. But my hands were so frozen that I could not hold onto him. In the drama that ensued the only way I could hold onto him was by biting his arm, and holding on tight. Luckily he was wearing a dry suit. My body is now bruised all over. When I get back on shore I’ll be examined by my medical team to find out exactly why.

The Sky News team will air their documentary later this year; we’ll advertise the date, but issue a warning. I’ve watched the footage and it does not make for comfortable viewing. It is as raw as it gets.

Anyone who tells you they enjoy swimming in freezing water is either mad, or has never done it. I certainly don’t enjoy it. I am doing it to carry a message about the health of our oceans. We are in a very, very dangerous situation, and the world needs to know about it, and take immediate action.

Will I still be doing this in 10 years time? After this swim, I’m not so sure; but be assured that my commitment to being on the frontline of this battle to protect our oceans will go beyond the next decade.

Lewis Pugh is an endurance swimmer and the UN Patron of the Oceans. This article was orignally published on his blog.