Scientists say east Africa will get wetter, so why is it drying out?

Despite models predicting increased rainfall with climate change, the region has collapsed into drought – a puzzle known as the East African paradox 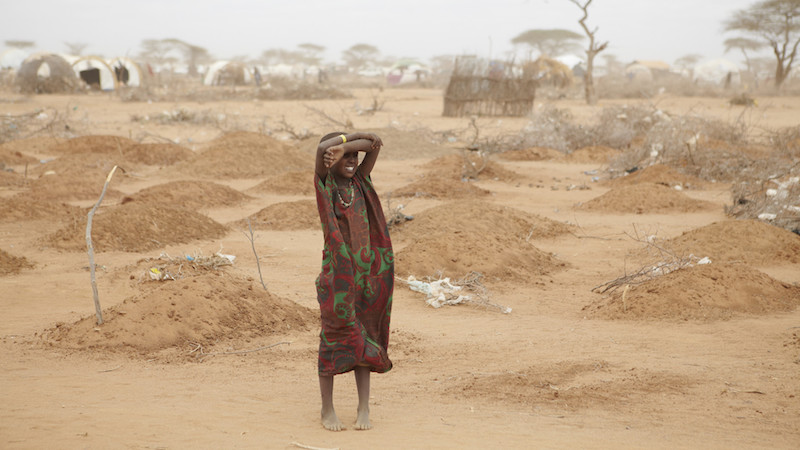 A young girl stands amid the graves of children who died after a drought hit Dadaab refugee camp in Kenya in 2011 (Photo: Andy Hall/Oxfam)

The long rains, one of two wet seasons that quench the thirst of the East African region, failed this year for the second time in a row. Lack of water, withering crops and starving cattle plunged Somalia, Ethiopia and parts of Kenya into a food crisis that the countries are not prepared for.

Humanitarian assistance has helped and will be needed well into 2018. But in war-affected Somalia and South Sudan famine has emerged; in Ethiopia aid money is running short after repeated droughts; and in Kenya the shortage of resources is giving rise to land conflicts.

For these countries, the ability to plan ahead is undermined by a mystery that has climate scientists puzzled. Most models suggest that global warming should be making the Horn of Africa wetter than in pre-industrial times. But as local weather data and dry streams on the ground testify, year after year the region is getting drier.

What has become known as the ‘East African climate paradox’ is a quirk that has been exercising scientists for the best part of a decade, but is still far from being explained. Why do models project more rain while data on the ground show less and less by the year?

“It could be that the paradox is not even a paradox,” says Alessandra Giannini of the International Research Institute for Climate and Society in the US, who specialises in climate trends in monsoon regions.

Just as one particularly cold winter doesn’t disprove the existence of long-term climate change, events such as the strong El Niño experienced in the region in 2015 could cloud the picture, she says. While in the long run the region’s climate might get wetter, in the short-term other phenomena could bring a few years of drought.

“Maybe the underlying wet trend has not emerged yet,” says Giannini. “We can’t really say that the models are wrong. What we are looking for is an explanation that includes elements of all these processes, that can explain everything, drought now and possibly long-term wetter conditions.”

“In any kind of projection it’s very important to look at the uncertainty” says John Marsham, climate scientist with the University of Leeds in the UK. Reflecting the chaotic nature of the climate system, models do not always return the same result, even when they run on the same inputs.

“Within the wide range of models available, some will not say [the weather] is going to get wetter. In addition, the apparent mis-match between the recent drying trend and the wetting in many model projections could be due to the current trends being generated by climate drivers that our models are not capturing,” says Marsham.

Models imagine the landscapes of future climates by plotting the influence of a variety of factors affecting the Earth, known as forcings. Some are natural, such as volcanic eruptions or the energy output of the sun. Others are generated by humans, such as the increasing concentration of greenhouse gases due to our fossil fuel-based industry.

Depending on the forcings included in the blueprint and the computing power of each model, which determines it’s complexity, the results might vary. Models also deal slightly differently with factors such as clouds or climate sensitivity, namely the amount of warming for any given amount of greenhouse gas.

Scientists have come up with an array of different explanations for the paradox, ranging from natural variability of the climate that models struggle to capture, to patchy observational data due to poor infrastructure and records in the region.

“The current models show a trend that we project through increasing greenhouse gases, but the recent [dry] past trend could be caused by something else” says Marsham. “For example, they could be driven by a change in aerosol emissions – the tiny particles that come with burning fossil fuels that have very different behaviour from greenhouse gases.”

Dave Rowell, a scientist with the UK’s Met office whose work focuses on African climate change and models, explains that if we accept the hypothesis that the recent decline in rainfall is caused by aerosol emissions, as we start to clean up pollution and remove these tiny particles, for example with better filters, the picture may change.

“If we keep burning fossil fuels releasing more carbon into the atmosphere, greenhouse gases would become the dominant forcing, with models then suggesting increased rainfall over East Africa,” he says.

Precipitation adds a further layer of complexity, because rain is the end point of a long chain of climatic and weather processes. In planetary terms, clouds are tiny, elusive objects that move and evolve on an extremely small scale. “The available models still struggle to capture them” says Marsham, “but equally science is rapidly advancing and I am confident that in coming years we will have better information.”

Although many questions remain open, the paradox doesn’t dent the scientific community’s trust in their research methods.

“There is always the risk that someone will use the uncertainty as an excuse for not acting, and that to my mind is the opposite of what we should do,” says Marsham.

“On the contrary, we are well aware of the challenge of predicting rainfall in the tropics and this mismatch doesn’t mean that the models are wrong. This is an interesting mystery to solve, and in doing so we will understand a lot more about the climate system in East Africa.”