Violence spreads ahead of election in drought-hit Kenya

Politicians have been accused of stoking land conflict between farmers, herders and indigenous groups to win votes, while failing to address the root cause 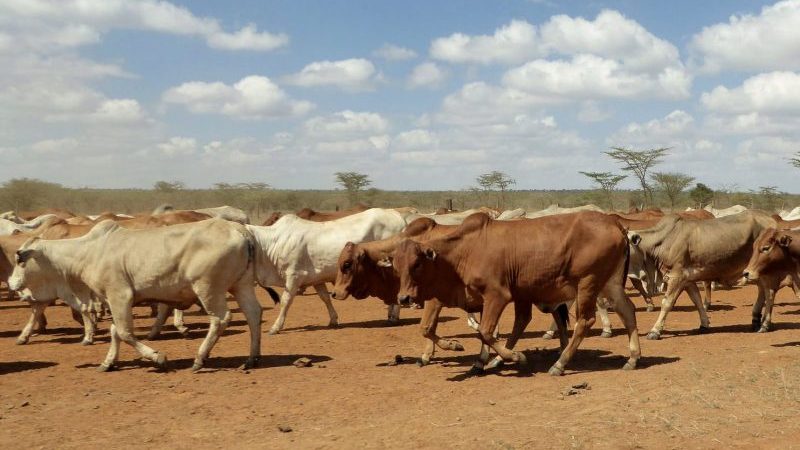 A racially-charged conflict between private landowners and nomadic herders in the drought-stricken county of Laikipia, Kenya, has spread to affect indigenous forest-dwellers.

Water shortage is driving Maasai pastoralists to roam further in search of pasture for their flocks, encroaching on land managed for tourism and ranching primarily by white settlers. In recent months, they have also entered Mukogodo Forest, home to the Yaaku people, cutting down trees to feed livestock.

The death toll since trouble first flared up in February is estimated at 20, with many more wounded. In the highest profile case, British-Kenyan dual national Tristan Voorspuy, founder of a luxury safari company, was shot dead.

Under environmental stress, resentment has surfaced among pastoralists against the white minority ownership of large areas of land – a sentiment politicians are accused of stoking to win votes for the general election on 8 August. Opposition lawmaker Mathew Lempurkel was arrested in connection with the Voorspuy murder, but prosecutors decided not to press charges, citing lack of evidence.

Meanwhile, there is no solution in sight to the underlying problem: a shortage of pasture.

Manasseh Ole Matunge, a spokesperson for the Yaaku people, told Climate Home one of their members was recently shot and wounded in a dispute over forest land.

Traditionally hunter-gatherers and bee-keepers, his tribe of around 4,000 people now keeps small livestock herds and has largely assimilated with the larger Maasai culture. But they are protective of their heritage and forest home.

The Yaaku understand prolonged drought – exacerbated by global warming – to be at the root of the problem, but believe politicians must take some responsibility. “Politicians told the pastoralists that the private farms were under a leasehold from government, therefore they were free to graze their livestock there,” Matunge said. Some are reportedly promising to requisition private land from white farmers if elected to office.

An intervention by the police and army did more harm than good, added Matunge: they shot livestock as well as armed people. “Government is doing nothing about the conflict between the pastoralists and the Yaaku because we are poor and marginalised,” he said.

The private landowners describe the pastoralists as “terrorists”. Aside from Voorspuy’s murder, they cite destruction of property and poaching of wildlife that attracts tourists to the area. Earlier this month, Laikipia Farmers’ Association announced the closure of Sosian Ranch, a cattle ranch and safari lodge.

In a written statement, ranch director Richard Constant said the violence and damage “can be laid squarely at the door of those political leaders who incited the [land] invasion”.

Defending their claim on the territory, the landowners emphasise the contribution of tourism to the regional economy and tax base, and conserving wildlife.

“As a business, we call for the disarmament of the illegal weapons possessed by those who still unlawfully sit on our property and the arrest of their ring leaders,” said Constant.

The Maasai accused of illegally occupying private farms and the forest claim they have no choice. Keeping livestock is their only livelihood. Selling cattle during the drought is an option, but a cow will fetch only 5,000 Kenyan shillings in the current market, about half the usual rate.

Simon Sairi Lenantiri, speaking for the group, claimed that white settlers account for around 10,000 of Laikipia’s 400,000 population, but hold half the land. The precise rate of private ownership could not be independently verified, but other sources agreed it was high compared to other parts of Kenya.

“The rest of the land is occupied by the black people who happen to have a large amount of livestock,” Lenantiri said – an estimated one million head of cattle.

The conflict is not only with white settlers but between different pastoralist groupings, he added. Politicians have fuelled division by telling one community or another that historically the land was theirs.

Lempurkel, who represents the constituency of Laikipia North for the Orange Democratic Movement, denied inflaming the dispute. “I admit there are historical injustices pertaining to the land where local people found themselves with very little land, but we’ll address this through the law,” he told Climate Home.

Although he said he did not encourage pastoralists to enter private property, Lempurkel defended those who did so, blaming the government for failing to address the land shortage.

“Instead, when the pastoralists entered the ranches, the government sent security forces who shot and killed a lot of the local people including their livestock forcing some of them into the forest,” he said.

The National Cohesion and Integrity Commission is responsible for promoting peace in Kenya. But interviewed the day after the shooting of the Yaaku herder, its chairman Francis Kaparo distanced himself from the problem.

It is not the government’s responsibility to provide grazing land, he told Climate Home, blaming the pastoralists for keeping more animals than the land can sustain.

While acknowledging that politics was playing a role in the conflict, he refused to comment further.

This type of conflict is prevalent across Africa, according to Marianne Wiben Jensen, senior advisor on land rights in Africa for International Work Group for Indigenous Affairs (IWGIA). Pastoralists and sedentary farming communities are often in competition for natural resources, which intensifies during droughts.

“A major root cause is that indigenous peoples in Africa do not have proper land tenure security,” she said. “Their customary collective land rights are not recognized or protected by national legislations and therefore it is very easy for powerful groups to invade or grab their lands – which is often the case in climate-inflicted conflicts.”

Both the Maasai and Yaaku are recognized as indigenous people by the African Commission on Human and People’s Rights and Jensen said they are all victims of climate change. During such conflicts where indigenous people are fighting with wealthy people, the government often takes the side of the rich and powerful group, added Jensen.