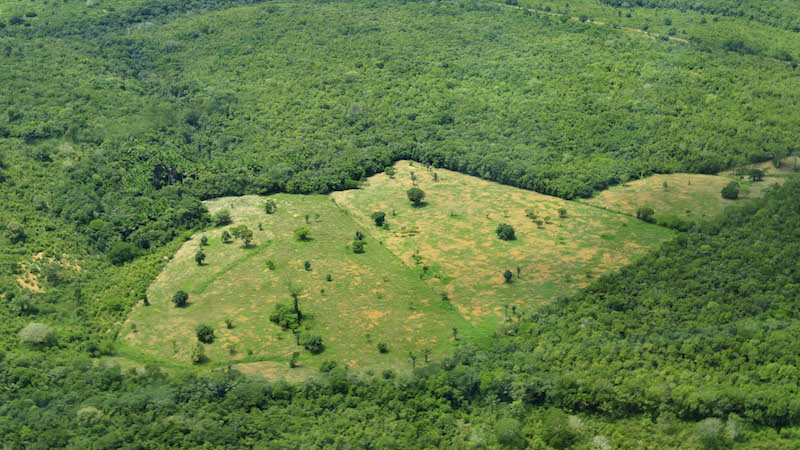 By Fabiano Maisonnave in Novo Progresso

According to the Brazilian authorities, Pedro Cordeiro is a big time and repeated environmental offender – if he actually exists.

In April 2017, environmental agents fined him $9.2 million for converting into pasture 7,586 acres of Jamanxim National Forest, in Brazil’s Amazon. That didn’t stop the destruction. Next month, Cordeiro got another fine, now at $4.6m, for chopping down 3,618 acres of pristine forest next to the first area.

Cordeiro, however, has never been found. He supposedly lives in Curitiba, a regional capital some 2,800km south of Jamanxim. His name appears only in the Environmental Rural Registry (CAR, in Portuguese) alongside plots of land in the forest he claims to own. That federal database requires all rural properties to register, but does not run background checks.

Setting up straw men or fall guys is the modus operandi of land-grabbers in the Amazon. They allow fines for stripping forests to accrue against other names while avoiding punishment for their environmental crimes.

Last week, this reporter tried to interview one of Cordeiro’s neighbours, Nelci Rodrigues. She is head of the Vale do Garça Association, which represents 186 squatters who claim land inside Jamanxim National Park.

Rodrigues, her husband Jaime Zaminhan and their two sons claim 17,050 acres of the park, according to the CAR database. They admitted that they took over federal land without paying for it, saying they were lured to the region by federal government policies created during the 1964-1985 military dictatorship. However, they seized the land, where they raise cattle, in 1998, 13 years after the regime’s end.

Rodrigues said she knew Pedro Cordeiro in person, whose land claim in the national forest is next to hers, but refused to help this reporter to locate him.

The conversation didn’t last long. Angered by questions about his family, Zaminhan interrupted the interview and expelled reporters from his comfortable home equipped with a swimming pool, in the Castelo dos Sonhos district, a few miles from the national forest.

“You’re just a journalist. Are you coming into my house to sacrifice my family? You pay attention, mate. You’d better leave, I rule here”, he said.

Instead of pursuing those actually behind the largest deforested area inside Jamanxim, the Brazilian federal government appears to be about to let Cordeira and several other supposed environmental offenders off the hook.

Last May, the Congress approved a bill that opens 1.5m acres (almost 6,000 sq km) in the Amazon to private property, pasture, agriculture and mining activities, in a move heavily supported by the powerful “beef caucus”. Now, president Michel Temer has until 22 June to sanction or veto it.

Most of the land set for resignation, 1.2m acres, is in Jamanxim National Forest, which would lose 37% of its area. The rest belongs to the neighbouring Jamanxim National Park, which would lose 12% of its total. These areas, which include land claimed by Cordiera and Rodrigues, would be downgraded to APA (Environmental Protection Area), the lowest protection category in Brazilian conservation system.

Inside APAs, private land ownership is legal, this would legitimate the farming practices of squatters, real and fake. Deforestation is again rapidly increasing in Brazil after it had declined for almost a decade, with pastoralists the main driver.

According to law, rural properties in the Amazon have to keep at least 80% of their area covered by natural vegetation. In practice, though, this is rarely respected, as fines such as those given to Cordeiro are rarely enforced and the federal government has regularly granted amnesties to farmers caught illegally clearing their land.

Defenders of the changes to the land designation, such as senator Flexa Ribeiro, argue the APAs will allow the regularisation of small squatters who lived inside the limits before the creation of the parks.

“There was no reduction [in protection], there was only recategorisation,” said Ribeiro. “We have changed the conservation unit so that the activities can be developed in the areas already occupied for decades.”

But land claims in Jamanxim National Forest usually involve large areas – an average of 4,378 acres per land-grabber according to the 2009 federal census. That is a considerable size even in the Amazon.

Squatters regularly live outside the boundaries of their claims. In Novo Progresso city, the gold miner and mayor Ubiraci da Silva, claims 2,380 acres inside the National Forest. He owes $580,200 in environmental fines. Last week, environmental authorities caught his employees deforesting inside the park again. He didn’t answer interview requests.

Unlike the national forest, the Jamanxim National Park has no permanent human occupation, it is one of most preserved forests in the Amazon. The 249,576 acres slated to become ‘APA Rio Branco’ has less than 1% of its surface deforested, according to calculations done by environmental NGOs Imazon and ISA with satellite images.

A more plausible explanation for its creation than the normalisation of residents who sometimes don’t even exist are the rich mineral reserves the area is likely to contain – especially gold, but also diamond and cassiterite – said social scientist Mauricio Torres, coauthor of a book that examines land-grabbing and deforestation in the region.

“The portion that the bill intends to amputate from the Park and transform it into a ‘generous’ APA has no settler occupation. The area is the victim of logging and of a new wave of illegal mining. One can wait and watch the area to be taken by land-grabbers and the environmental crimes that happens today. It will increase deforestation”, said Torres.