With a Pacific island presiding over climate talks, this could be the year to levy funds for global warming’s biggest victims, writes Julie-Anne Richards 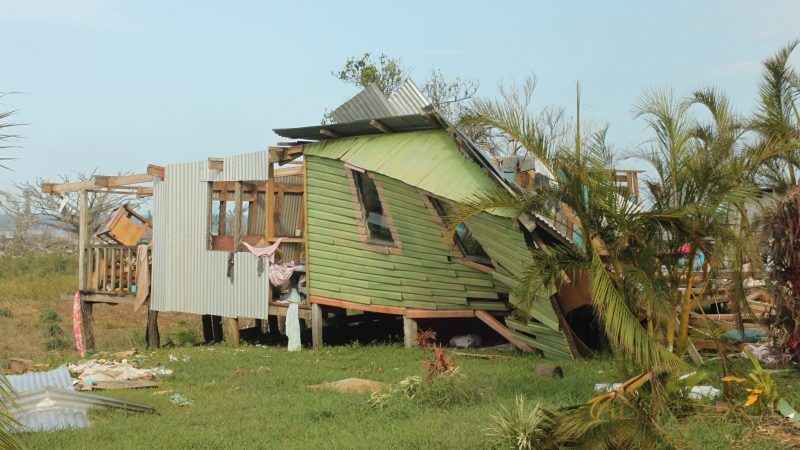 The aftermath of Cyclone Winston in 2016 (Pic: Flickr/Australian Department of Foreign Affairs and Trade)

Loss and damage has long been a slippery item within the climate negotiations. It’s not that it’s particularly hard to understand: the worst impacts of climate change that go beyond what is possible to adapt to.

You can’t adapt to your island home disappearing under rising seas, or your fertile farmland being turned into desert, or your source of water from glacial melt disappearing as glaciers permanently melt away.

The slipperiness of loss and damage is entirely down to rich countries not wanting to understand because, ultimately, they don’t want to pay to deal with the impacts.

But Fiji, this year becoming the first ever Pacific Island to preside over UN climate negotiations, has the moral standing to focus the collective minds of the international community. Spread across 300 islands, Fiji’s population of 870,000 are highly vulnerable to loss and damage, as climate change increases the intensity of cyclones and floods, increases sea levels, bleaches coral, and impacts fish stocks.

As the impacts get more and more severe, we need new ways to fund support for those at the sharp end.

In a report on loss and damage finance I co-authored, we used the example of Cyclone Winston, the strongest cyclone ever to make landfall in the southern hemisphere. It killed 44 people, damaged or destroyed 40,000 homes and ravaged public buildings and infrastructure, including 229 schools, and caused $1.4 billion in damages to Fiji in February 2016.

Despite being the best funded emergency response in the world in 2016, only 51% of the requested $38.6 million funding Fiji desperately asked for to recover from Cyclone Winston was raised.

In the new era of loss and damage from climate change, we are going to need new ways of providing international support for these impacts. Relying on pity or charity is not enough.

We need finance that is provided automatically, not at the whim of rich governments or people sitting far away. To give credit where it is due, they are giving more than ever before. But the response to Winston shows charitable giving cannot keep up with the need that is growing even more quickly driven, in no small part, by climate change.

This finance should be provided by those who caused the problem, the biggest climate polluters. Our report outlines a number of sources of such finance that have been scoped – from a levy on fossil fuel extraction hitting oil and coal companies, to levies on air travel, to taxes on international shipping and aviation fuel (which, appalling, are not taxed at all today!).

We can tap into these currently un- or under-taxed, polluting segments of the economy to pay for the climate damage they are causing, without disturbing the equanimity of a finance minister in any “donor” country. Our report lays out how to make it work, and the next steps to take this year and the next few years to put it in place. The only ingredient we’re missing is political will.

Acts of God: why secular climate projects fail in the Pacific

Hopefully, not for much longer. We are edging ever closer to this political will.

In November, Fiji chairs the annual UN climate summit – in Bonn, Germany. Sadly, the dream tourist destination does not have capacity to host the tens of thousands of delegates involved. Then again, with cyclone season officially starting on 1 November, negotiators wouldn’t want to experience “loss and damage” first hand.

It’s inconceivable that the first ever climate negotiations hosted by a Pacific island country would not have a significant outcome on loss and damage. And despite dancing around the issue for the last three years, rich countries can’t evade it any longer.

All we need at the Fiji COP is an acknowledgement of the huge injustice at the heart of climate change – that the poorest people who are least responsible for the problem are facing the worst impacts, that they truly deserve our support, and a clear direction that we will spend the next two years putting in place a system to ensure those causing the problem are forced to pay for it.