Susan Biniaz, who played a key role in drafting the US-China and Paris deals, will continue to work on international climate change issues 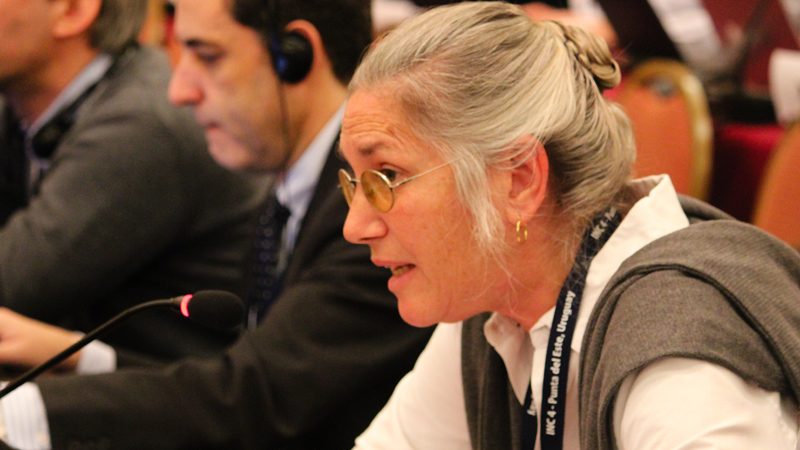 Susan Biniaz was a key architect of the Paris Agreement (Pic: IISD)

Susan Biniaz, the US state department’s former top climate change lawyer, has been appointed a senior fellow at the UN Foundation.

After nearly three decades as a civil servant, she will continue to work on international climate change issues for the advocacy and outreach organisation.

She resigned from the state department two months ago, shortly after the election of president Donald Trump – whose agenda is notably hostile to much of the work done by Biniaz and her colleagues in recent years.

A key architect of the 2015 Paris climate deal, Biniaz shaped the language to accommodate the US’ polarised politics and build bridges abroad.

Her work has come under renewed scrutiny in recent months as Trump’s White House dithers over quitting the agreement. Trump is now reportedly postponing a decision until after a G7 summit 26-27 May.

Trump is seeking to reverse his predecessor Barack Obama’s policies that underpinned a US commitment to cut greenhouse gas emissions 26-28% from 2005 levels by 2025. Is US participation in the deal compatible with this fossil fuel-friendly domestic agenda?

Together with lead negotiator Todd Stern, Biniaz has been advising that it is. Both have told media that any country can revise its pledge. While the Paris Agreement encourages parties to increase ambition over time, it does not prohibit the reverse.

On legal interpretations of the Paris Agreement, it’s usually a good idea to listen to Sue Biniaz https://t.co/sNgK6OPavF

In essence #Biniaz is giving #Obama‘s objectives re #ParisAgreement! Just wanted others to do more while US retains wiggle room to do less! https://t.co/dhZtayloXG

Just as the ambiguous language gave Obama leeway to promote climate action in the face of fierce Republican opposition, it has enough flex – the lawyers argue – to keep a reluctant Trump administration connected to the process.

They trod a careful line on the legal status of the accord, so it could not be blocked by hostile Republicans. The result was that some rules have legal force but national targets are not legally binding, a nuance that allowed Obama to join the deal without going through Congress.

Biniaz is personally credited with crafting the phrase “in light of different national circumstances”, which unlocked a bilateral agreement between the US and China, the world’s two biggest emitters. That in turn helped to break down divisions between developed and developing countries in the run-up to the historic Paris Agreement.

Profile: Susan Biniaz is “optimistic” ahead of the Paris climate summit

In her career at the state department, spanning multiple administrations, Biniaz has also touched on human rights, the law of the sea and Somali piracy, among other things. One of her first assignments concerned the Intergovernmental Panel on Climate Change, which continues to be a leading authority on climate science.

Elizabeth Cousens, deputy chief executive of the UN Foundation, said in a statement: “Sue Biniaz was a key drafter and architect of the Paris Agreement on climate change.

“She possesses an unsurpassed understanding of the legal nuances surrounding this and other critical international climate and environmental agreements, and is renowned for her ability to resolve the most contentious and seemingly intractable negotiating issues.

“Her experience and thought leadership will prove invaluable to UNF and to others committed to uniting all nations of the world around bold and ambitious climate action through the Paris Agreement.”

The UN Foundation is a US charity, funded by governments, corporate and individual donors to build public-private partnerships on global problems.