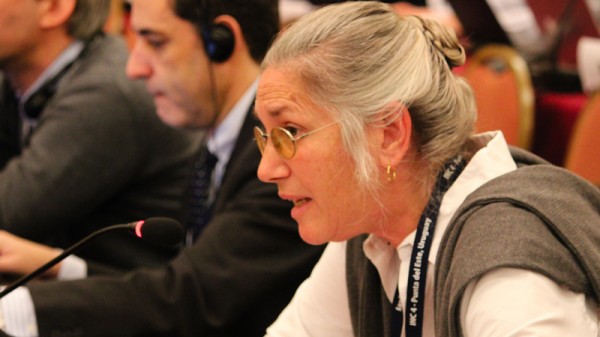 When conflict between rich and emerging economies threatened to derail UN climate talks in Lima last month, one six-word phrase put them back on track.

It was the same words used by the US and China in November’s historic joint pact to cut emissions: “In light of different national circumstances.”

The author of this formula, Susan Biniaz, keeps a low profile. But as lead climate change lawyer for the US State Department, she will play a critical role securing a global deal in Paris this December.

Biniaz spoke to RTCC about the ups and downs of more than 25 years working on the legal puzzles of climate change.

Her first assignment at the State Department back in 1988 was drawing up parameters for the Intergovernmental Panel on Climate Change, which has become the world’s leading authority on climate science.

Since then, climate change – which she says was a “completely obscure” and “not very glamorous” topic at the time – has become a global priority. Biniaz has gone on to be one of the most quietly influential players.

At the last round of UN climate talks in Lima, it was a phrase she penned that sleep-deprived diplomats reached for in the small hours of Sunday. That was when agreement was finally reached, 33 hours after the talks were due to finish.

Countries committed to an ambitious Paris deal “that reflects the principle of common but differentiated responsibilities and respective capabilities, in light of different national circumstances”.

Analysis: US-China pact could tumble barriers to a global deal

While something of a mouthful, this was phrase that brought together the two highest emitting countries in the world, China and the US.

Presidents Barack Obama and Xi Jinping adopted it in a landmark climate pact last November, the first ever to commit China to peaking its greenhouse gas emissions.

It raised the prospect of breaking down a stubborn obstacle to progress in the talks: the firewall between rich and poor countries.

Historically, “common but differentiated responsibility” has been rigidly interpreted to mean only developed countries – as classified in 1992 – must cut emissions.

China’s commitment – and the wording that went with it – reflected a growing acceptance that emerging economies, with their growing emissions, must play a more active role.

Reporting back to the UK parliament on progress in Lima, energy and climate change secretary Ed Davey named Biniaz – “a very, very able lawyer” – a driving force behind the outcome.

“I think those words will prove to be very significant,” he said. “We are beginning to see the possibility of the firewall being overcome.”

Briefing: Lima call for climate action – what was decided?

Biniaz opts for understatement: “It ended up being a useful sentence. We thought that might be the case when we discussed it in China.”

The US and China discussed several formulations before hitting on that one, she says. “It was not like there was one magic phrase. I had many different options up my sleeve.”

It is not the first time Biniaz has hit on a vital compromise.

At Durban in 2011, US lead negotiator Todd Stern credited her with winning round India to an agreement by changing the words “legal outcome” to “agreed outcome with legal force”.

The precise legal nature of a Paris deal is one of the key issues for the next 11 months.

European negotiators insist a deal must be legally binding, but the US could struggle to get a treaty ratified in Congress.

Stern has endorsed a proposal from New Zealand that would make some of the rules legally binding but not the content of country pledges.

It is a work in progress, says Biniaz. “In the negotiations, we have been focusing much more on the content of what countries should be expected to do than the legal form that should take.”

Negotiators came out of Lima with 39 pages full of optional elements of a Paris deal. By December, these need to be condensed into a simple agreement.

In the coming months, there will be more technical negotiations along with a ramping up of diplomatic efforts.

Biniaz expects the text to get longer before it gets shorter.

“Nobody wants to give up positions early on,” she says. “We spend a lot of the year just trying to get possible bridging ideas into the bloodstream, so everybody kind of knows how issues are going to turn out even if they don’t say so out loud.”

She is “pretty optimistic” Paris will work out, “even if it is just a start and we ratchet up ambition over time”.

Ultimately, what Biniaz can endorse in Paris will be determined by the political situation at home.

President Obama is making climate action a priority of his last year in office. Yet nearly half of senators recently voted to reject the scientific consensus that human activities cause global warming.

This is just the latest swing of the pendulum during Biniaz’s career.

She worked on the elements of a hypothetical global climate treaty before the Kyoto Protocol was born – and on an alternative to Kyoto when the US Senate refused to ratify the deal.

“We lawyers at the State Department are career civil servants, so we are used to rolling with different administrations on all different issues,” says Biniaz.

“We have definitely gone back and forth politically. But from a legal point of view, the job is not that different: trying to figure out the sweet spots that will figure out the issues.”

Biniaz is cheerfully candid about the stresses of working on climate change: “I have worked on a million other issues at the same time. I think I would go out of my mind if this was the only issue I worked on, because it is so contentious.”

All the same, she enjoyed it enough to abandon her early career plans to move into more lucrative private legal practice. “I had no problem jumping out of bed each morning and going to work,” she says. “I like the mental puzzles that it poses and the problem-solving aspect.”

Annual UN conferences of the parties, or COPs, are low points of the job, says Biniaz.

“They probably bring out the worst in people, because everybody is tense about how it is going to come out and everybody feels like they are missing out on the key conversations.”

She jokes: “Every single COP, I say to someone: ‘If you see me here next year, shoot me.’ But it is an addiction.”

How does she stay sane? “I’m not sure I do… I drink a lot of coffee and inject as much humour into the process as possible.”